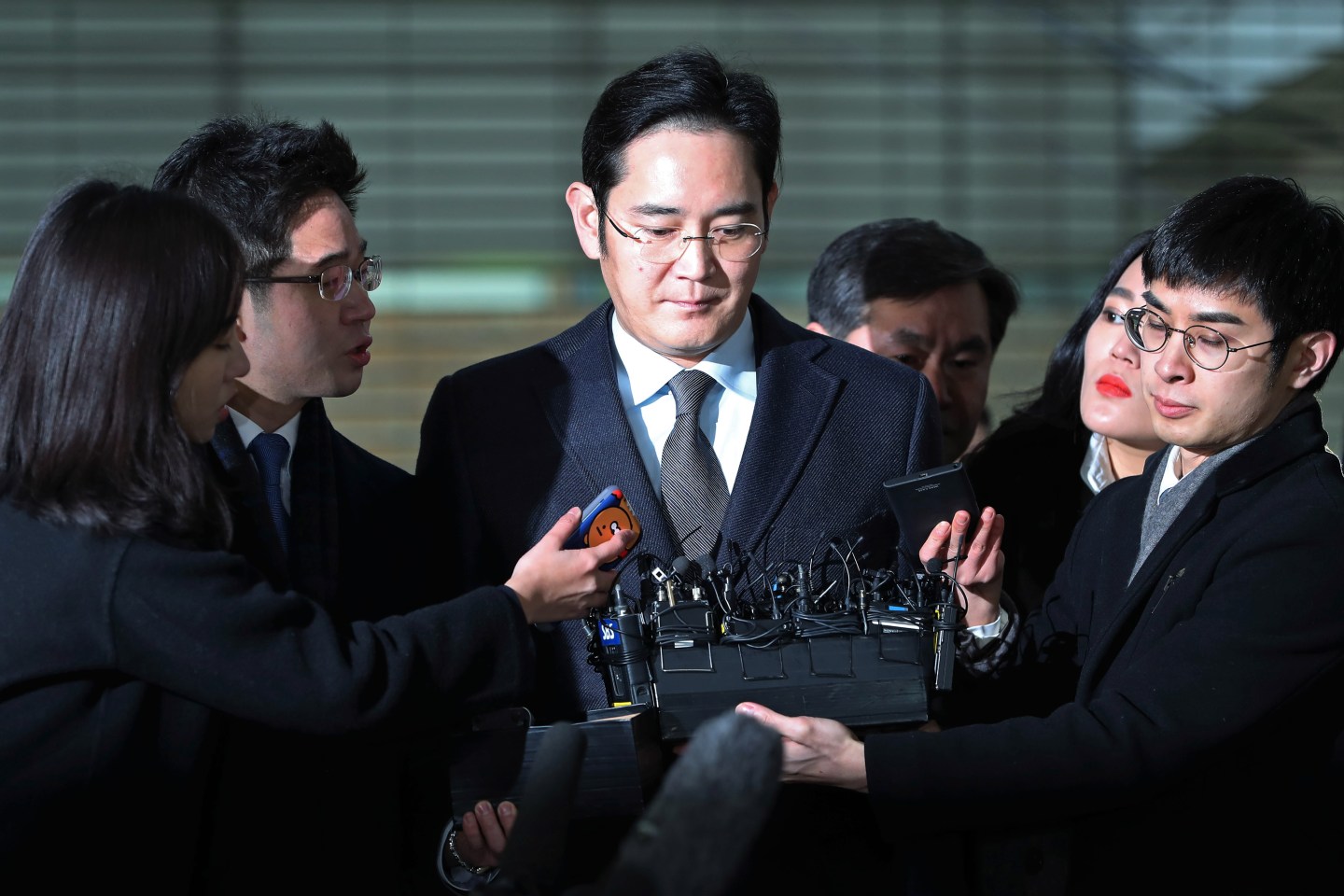 Samsung Group leader Jay Y. Lee appeared at the South Korean special prosecutor’s office for questioning on Monday as part of a wider investigation into an influence-peddling scandal that could topple President Park Geun-hye.

The special prosecutor has focused on South Korea’s biggest conglomerate, accusing Lee in his capacity as Samsung chief of pledging 43 billion won ($37.31 million) to a business and organizations backed by Park’s friend, Choi Soon-sil, in exchange for support for a 2015 merger of two Samsung companies.

The funding included sponsorship for the equestrian career of Choi’s daughter, who is under arrest in Denmark after being sought by South Korean authorities.

Proving illicit dealings between Park or her confidantes and Samsung Group is critical for the special prosecutor’s case that ultimately targets Park, analysts have said.

Park was impeached by parliament in December and South Korea’s Constitutional Court will decide whether to uphold that decision. She has been stripped of her powers in the meantime.

Lee arrived at the prosecution office in southern Seoul early on Monday in a black sedan, dressed in a dark blue suit and tie and flanked by Samsung Group officials and his lawyer.

“I will once again tell the truth to the special prosecution,” the third-generation leader of South Korea’s biggest conglomerate told reporters before entering an elevator, without giving further details.

Outside the prosecutor’s office, protesters held up signs calling for his arrest.

The special prosecution team said it also planned to question two other Samsung executives as suspects. Both are officers of the Korea Equestrian Federation and have been questioned previously in the case.

One of those two, Samsung Electronics (SSNLF) president Park Sang-jin, did not respond to reporters on his arrival at the special prosecution team’s office.

Investigators are expected to decide, possibly this week, whether to again seek a warrant to arrest the 48-year-old Lee.

In January, the special prosecution sought a warrant to arrest Lee after questioning him for more than 22 hours, accusing him of paying bribes to win the state pension fund’s support for the controversial merger of Samsung C&T and Cheil Industries.

However, a Seoul court rejected that request.

Chang Choong-ki, deputy head of Samsung Group’s corporate strategy office, known informally as its “control tower,” was also questioned on Sunday as a suspect and returned home hours later. The special prosecutor’s office said it had not decided yet on its plans for Chang.

Shares in Samsung Electronics had fallen 1.25% by 01:08 GMT on Monday, compared with a flat wider market.

“The issue will have limited impact on share prices, except if the worst-case scenario happens, since political issues previously did not have a big influence on share prices or earnings,” said Bae Sung-young, a stock analyst at Hyundai Securities.