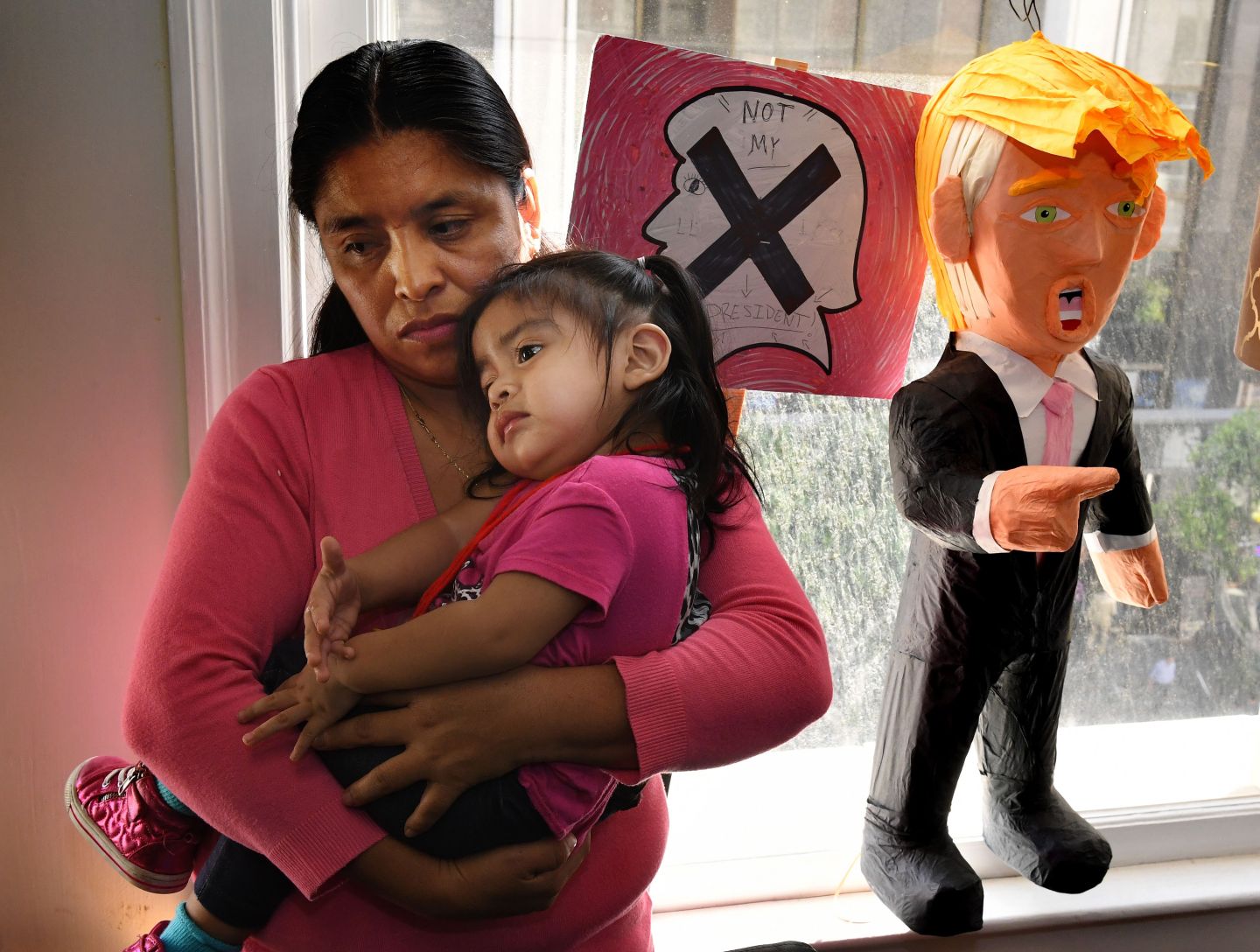 Lola Vargas (L) and daughter Athena wait in their attorney's office before the deportation hearing of her husband Mario Vargas, in Los Angeles, California on February 9, 2017. The family's plight has gained public attention after their daughter Jersey met with the Pope to discuss the possible deportation of Mario. / AFP / Mark RALSTON (Photo credit should read MARK RALSTON/AFP/Getty Images)
MARK RALSTON AFP/Getty Images

Advocacy groups say that Immigration and Customs Enforcement officers are rounding up people in large numbers around the country as part of stepped-up enforcement under President Donald Trump.

They say a roundup in Southern California was especially heavy-handed and cite arrests in places such as Atlanta, Chicago, New York, Texas and North Carolina that have rattled immigrants.

The government says it’s simply enforcing the laws and conducting routine enforcement targeting immigrants in the country illegally with criminal records. Authorities say it’s no different than what happened during the Obama years on a regular basis.

The truth lies somewhere in between. Here are some of the facts surrounding what’s happening with immigration enforcement:

As a candidate, Donald Trump vowed to take a hard line on immigration. Five days after taking office, he signed a sweeping executive order that made clear that just about any immigrant living in the country illegally could be a priority for deportation, particularly those with outstanding deportation orders. The president’s order also said enforcement priorities would include convicted criminals, immigrants who had been arrested for any criminal offense, those who committed fraud, and anyone who may have committed a crime.

Under President Barack Obama, the government focused on immigrants in the country illegally who posed a threat to national security or public safety and recent border crossers. But despite the narrower focus, more than 2 million people were deported during Obama’s time in office, including a record of more than 409,000 people in 2012. At one point, he was dubbed the “Deporter in Chief” by his critics.

The record was reached with the help of the Secure Communities program that helped the government identify immigrants in the country illegally who had been arrested. In the latter half of Obama’s tenure, deportations plummeted to lows matching those of former President George W. Bush’s term.

ARE THE LATEST RAIDS A DIRECT RESULT OF TRUMP’S ORDER?

David Marin, Immigration and Customs Enforcement’s field office director for enforcement and removal operations in greater Los Angeles, said the agency carries out these operations two or three times a year in his region. He says the California operation was in the planning stages “before the administration came out with their current executive orders.”

But immigrant rights groups say the actions are harsher than in the past.

Advocates began fielding calls Thursday from immigrants and their lawyers reporting raids at homes and businesses in the greater Los Angeles area. In one instance, agents showed up at the home of a 50-year-old house painter named Manuel Mosqueda in the Los Angeles suburbs, looking to arrest an immigrant who wasn’t there. In the process, they spoke with Mosqueda, arrested him and put him on a bus to Mexico — though lawyers were able to halt his deportation and bring him back.

In all, Immigration and Customs Enforcement arrested about 160 people during a five-day sweep in Southern California aimed at immigrants with criminal histories and deportation orders, including a Salvadoran gang member wanted in his country and a Brazilian drug trafficker. Marin acknowledged that five of those arrested would not have met the Obama administration’s enforcement priorities.

Portland Mayor: How Sanctuary Cities Can Stand Up to Trump

The agency called it an “enforcement surge” that was no different than enforcement actions carried out in the past and said a “rash of recent reports about purported ICE checkpoints and random sweeps are false, dangerous, and irresponsible.” In a statement, the agency said “officers frequently encounter additional suspects who may be in the United States in violation of the federal immigration laws. Those persons will be evaluated on a case by case basis and, when appropriate, arrested by ICE.”

Despite the claims that this is business as usual, an indication of the changed tactics came earlier in the week when Homeland Security Secretary John Kelly testified before Congress. He told lawmakers immigration agents expressed frustration about that they were not fully allowed to enforce immigration laws under the Obama administration. He predicted Trump’s directives would end that frustration.

Defeated Sheriff Joe Arpaio Has No Regrets on Immigration

“I think their morale has suffered because of the job they were hired to do, and then in their sense, they’re … kind of hobbled or, you know, hands tied behind their back, that kind of thing,” Kelly told the House Homeland Security Committee. “And now, they feel more positive about things. I bet if you watch the morale issue, you’ll … be surprised going forward.”

Acting ICE Director Thomas Homan, who was previously in charge of the agency’s enforcement and removal operations, earlier this month made a point of noting that his agents would enforce the law.

In at least one case, it seems clear that Trump’s order changed someone’s fate. Guadalupe Garcia de Rayos, a mother of two in Phoenix, was arrested nearly a decade ago for using a false ID to get a job as a janitor at an amusement park. She pleaded guilty to a felony charge, but the government during the Obama years declined to deport her despite her being in the country illegally. On Wednesday, she showed up at the ICE building in Phoenix for a scheduled check-in with immigration officers and was swiftly deported to Mexico.