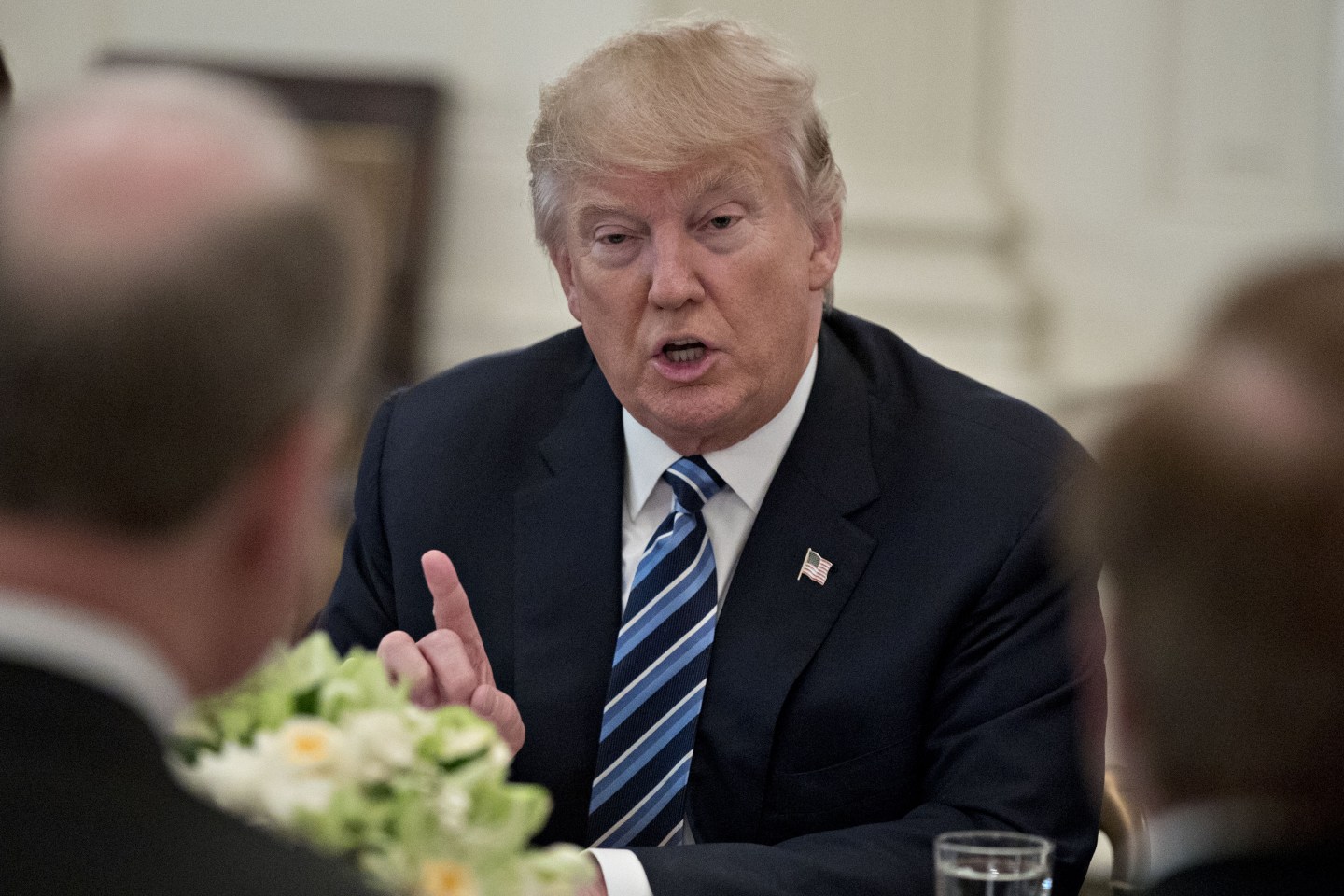 U.S. President Donald Trump speaks during a meeting with airline executives in the Roosevelt Room of the White House in Washington, D.C., U.S., on Thursday, Feb. 9, 2017.
Andrew Harrer/Bloomberg via Getty Images

When the term “fake news” burst onto the scene during the presidential election, most of the examples the media referred to came from right-wing sites and networks, alleging all kinds of horrible things done by Hillary Clinton and/or the left: murders, child sex-abuse rings operating underneath pizza parlors, and more.

If Donald Trump was mentioned in these fake stories, it was usually in a complimentary way, like the one about Pope Francis endorsing his campaign, or one that said he sent his private plane to pick up 200 starving Marines.

But liberal sites and networks are no strangers to fabricated news for the simple reason that the desire to believe something that caters to our existing prejudices isn’t restricted by political ideology. And according to an editor who works for the fact-checking site Snopes, liberal versions of fake news are growing in popularity.

Of course, the term “fake news” has also grown to encompass not just outright hoaxes created by dubious websites, but also stories in the mainstream media that turn out to be based on inaccuracies or suffer from extreme ideological spin.

In the latest example, former journalist and Clinton aide Sidney Blumenthal wrote an essay in the highly-regarded London Review of Books, in which (among many other things) he described how Donald Trump’s father Fred had commissioned a couple of racist TV ads during his run for mayor of New York in 1969.

Blumenthal talked about how the first ad portrayed a black drug addict terrorizing a neighborhood. But as both the Washington Post and Politico have pointed out, the videos are fakes, created by a husband-and-wife team of videographers as an exercise in social commentary. Also, there’s no evidence that Trump’s father ever ran for mayor.

Clinton’s former aide isn’t the only one to fall for this kind of fake related to Trump’s father. During the election campaign, an image was circulated on social media that allegedly showed the senior Trump (who was also a New York real estate developer) wearing a Ku Klux Klan robe. That picture is also a fake.

Many of the other “fake news” stories believed and shared by critics of Trump fall into a similar pattern. One that got a lot of play on social media was a New York Times story that claimed Rick Perry didn’t really understand the office he was about to assume, after Trump named him Secretary of Energy.

The Times‘ story alleged that Perry didn’t know the Department of Energy also had responsibility for nuclear weapons. But the only quoted source in the story later said his comments were taken out of context, and a statement was later produced that was signed by Perry in which he appeared to be well aware of the department’s nuclear responsibilities.

The New York Times has said that it stands by its reporting on that story, and that it had other sources besides the one named in the piece. But even if it was inaccurate, many people clearly wanted to believe it, because it fit their existing preconceptions about how unfit for office many of Trump’s nominees are.

More recently, a story was widely shared on Facebook and other social networks that claimed police officers had burned a camp of indigenous activists protesting the Dakota Access pipeline. The story included a photo that appeared to show hundreds of tipis burning. The story was completely untrue, however, and the picture was from an HBO film from 2007.

The immigration order that President Trump signed blocking travel from seven predominantly Muslim countries also caused a rash of fake stories, including one that showed a 5-year-old in handcuffs at an airport. But the picture was from 2015.

A number of stories shared both during the campaign and after purported to show evidence of racist attacks or abuse as a result of Trump’s candidacy, including a student who had her hijab stolen on the subway, and a man who said he was thrown off an airplane after speaking with his mother in Arabic. The woman lied, and the man turned out to be a well-known YouTube prankster.

A Washington Post story that claimed the Russians had hacked into the U.S. electrical grid also turned out to be untrue.

Another story that was widely shared involved a Jewish family that said they had to leave their home and go into hiding after their son asked to be excused from performing in a Christmas nativity play, and they were subjected to abuse. As it turned out, the family had gone on a vacation trip that was previously scheduled.

As Snopes editor Brooke Binkowski noted in her interview with The Atlantic, if a story triggers a strong emotion in you, like rage, “then you probably need to check it against something else,” because it may have been deliberately created to have that effect. And that’s advice that applies to readers and social-media users across the political spectrum.