A Federal Judge Has Blocked the $54 Billion Anthem-Cigna Merger 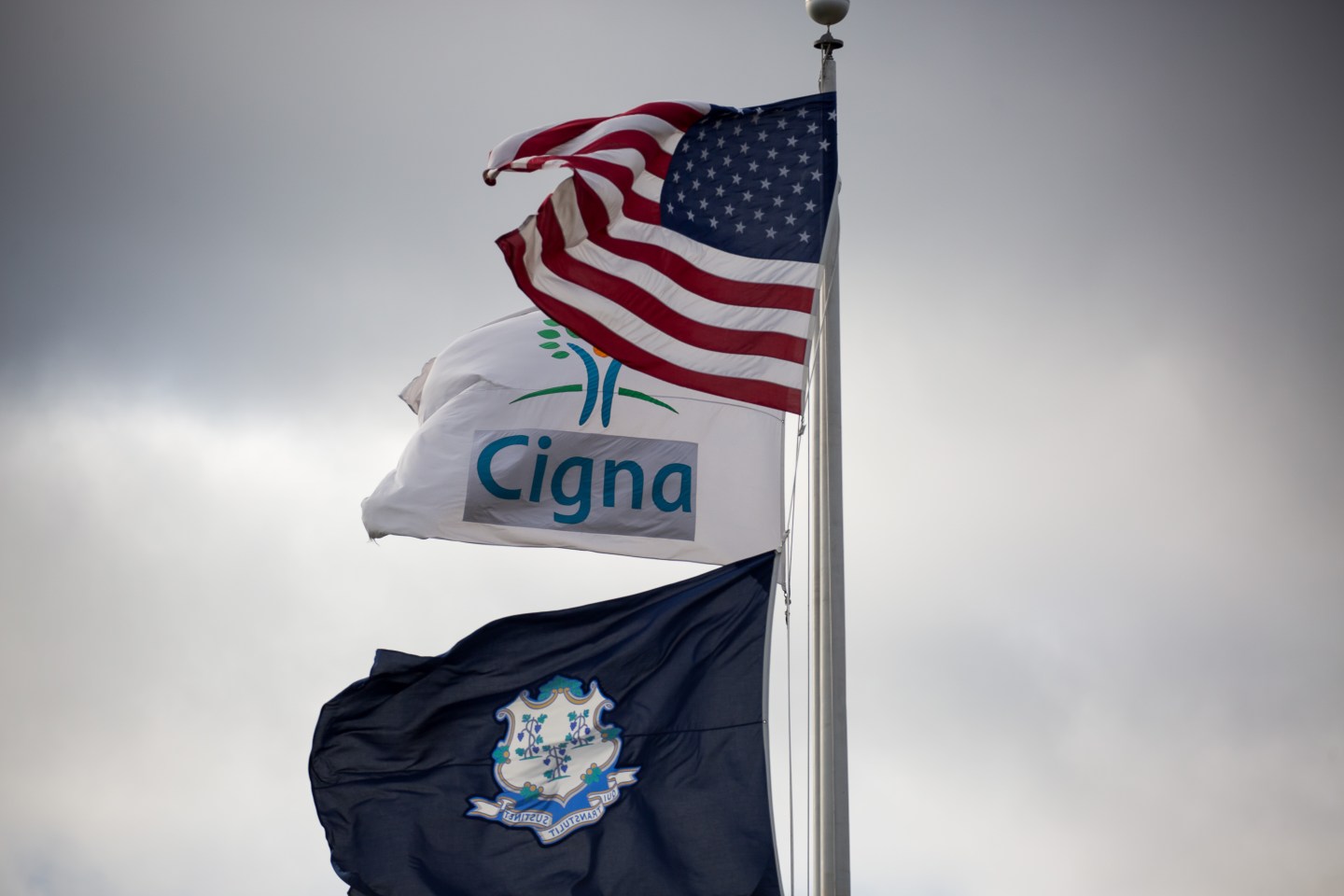 An American flag flies above a Cigna Corp. flag at the company's headquarters in Bloomfield, Connecticut, U.S., on Tuesday, Nov. 22, 2016. Anthem Inc.'s proposed $48 billion merger with Cigna Corp. could give the insurer the power to raise prices for employers both in the 14 states where it does business, as well as across the country, according to a witness in the U.S. government's lawsuit to block the deal. Photographer: Michael Nagle/bloomberg
Michael Nagle/Bloomberg

The U.S. Justice Department sued in July to stop Anthem’s purchase of Cigna, a deal that would have created the largest U.S. health insurer by membership, and Aetna’s (AET) planned $33 billion acquisition of Humana (HUM).

The merger would have worsened an already highly concentrated market and is likely to raise prices, Judge Amy Berman Jackson of the U.S. District Court for the District of Columbia said while issuing the ruling against Anthem’s deal.

Government antitrust officials argued that both deals would lead to less competition and higher prices for Americans. The acquisitions would have reduced the number of large national U.S. insurers from five to three.

For more on the health insurance sector, watch Fortune’s video:

The second trial considered overlaps in the two insurers’ business selling health benefits to individuals, and administering Medicare Advantage coverage to the elderly.

Anthem argued that there was enough competition because large companies with more than 5,000 employees often used multiple smaller players in the national market, but the judge disagreed.

“Regional firms and new specialized ‘niche’ companies that lack a national network are not viable options for the vast majority of national accounts, and they will not ameliorate the anticompetitive effects of this merger,” Jackson wrote.

Cigna intends to carefully review the opinion and evaluate its options in accordance with the merger agreement, it said in a statement.

An Anthem spokeswoman declined to comment on the matter.

Bill Baer, who was head of the Justice Department’s antitrust division when it decided to sue to block both the insurance deals but has since left the agency, also hailed the decision. “Together with the decision on Aetna and Humana, this preserves five large national providers of critically important health insurance products,” he said.

The fifth player, UnitedHealth Group (UNH) was not involved in the deals.

Some Wall Street analysts expect all four of the companies to now move on, although Aetna and Humana have not committed to doing so. Their deal expires Feb. 15.

“The likelihood of success in an appeal would be very low,” said Matthew L. Cantor, a partner in the law firm of Constantine Cannon in New York. He noted points in the judge’s order about the concentrated national market, the high barrier to entry for competitors, and the companies’ roles as direct competitors.

The deals were announced at a time when former President Barack Obama’s national healthcare reform law was fully in place and the four insurers were growing in the individual insurance market it established. The insurers said new costs, from higher taxes to investments in new Obamacare products, were driving their need for scale.

That landscape is less certain now. Aetna and Humana have cut back Obamacare enrollment for 2017 after losses, and President Donald Trump and fellow Republicans are weighing a “repeal and replace” path for Obamacare.

More deals may be in the offing, JPMorgan analyst Gary Taylor said in a research note. “Given Anthem and Cigna‘s pursuit of Humana in 2015, we think new potential combinations could emerge.” He does not expect shares in either Anthem or Cigna to move given that investors had expected this ruling.

Cigna is entitled to receive from Anthem a $1.85 billion break-up fee if the deal fails to win regulatory approval, according to the merger agreement. The agreement also requires Cigna to have put forth its best effort on that front.

But Anthem and Cigna disagreed about the deal in court, Jackson wrote in her order, with Cigna refusing to sign off on Anthem’s interpretation of how the companies could garner savings.

Anthem is the largest member of the Blue Cross Blue Shield Association and operates BCBS plans in 14 states. It and said it could apply its discounts to Cigna members while Cigna said its collaborations with doctors would save money.

Pre-merger integration was stalled and incomplete, the judge said.