10 Trips of a Lifetime 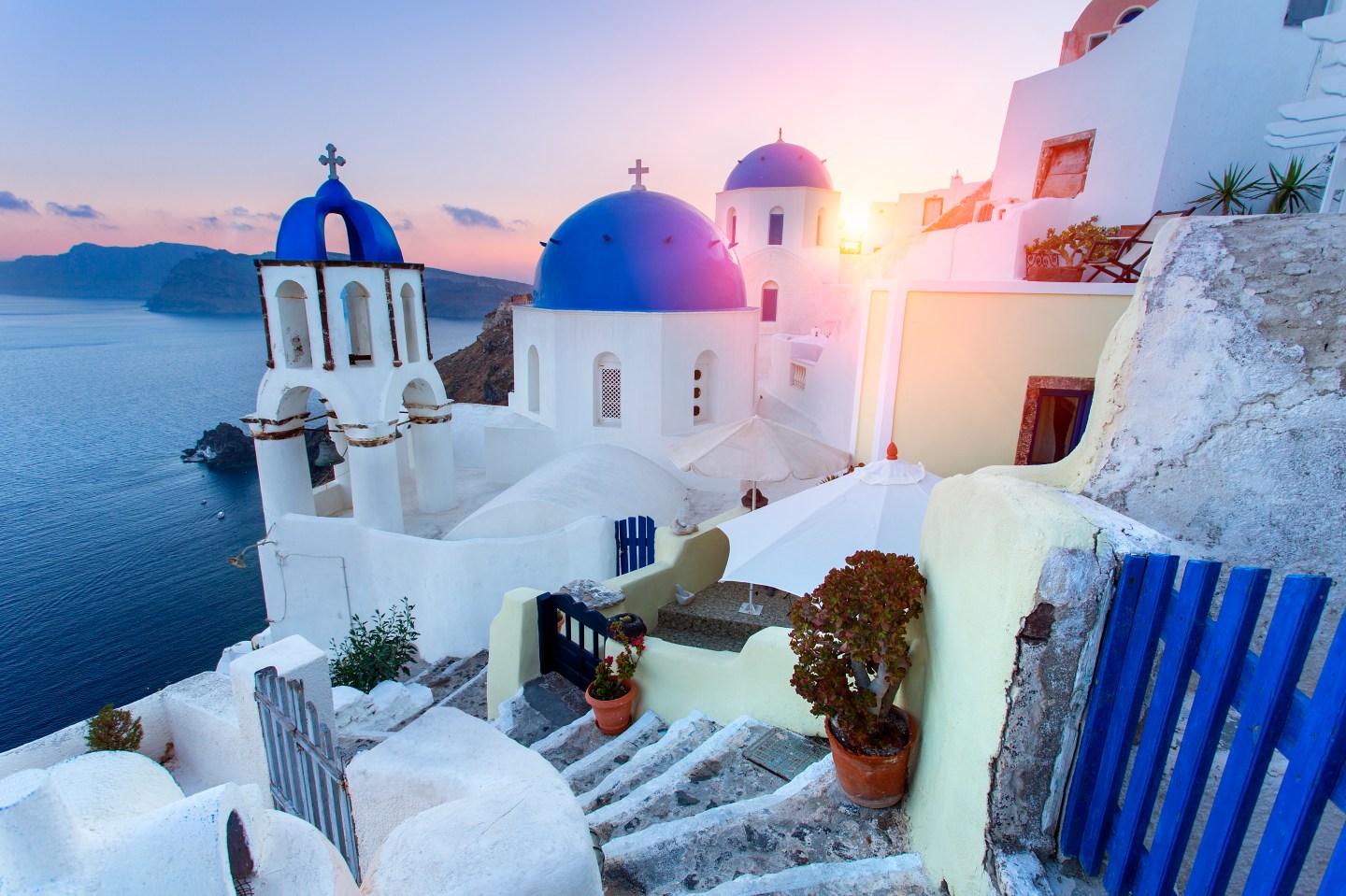 Exploring the “lost city” of Petra, a walking safari in Zambia, a cruise to Antarctica: This isn’t your average trip. Take your family vacation to the next level with 10 destinations worthy of your bucket-list.

If there were ever a place that could get by on its looks, it would be Greek isle Santorini. Whitewashed cave houses framed by bougainvillea and backed by blue-domed churches spill down the rim of an ancient volcanic crater; at sunset, the Sea of Crete is bathed in a rosy glow. Santorini’s appeal also lies in its wealth of diversions: extraordinary wines, black-sand beaches, and archaeological sites like the Akrotíri settlement, often referred to as the “Minoan Pompeii.” Make your base Perivolas, in the village of Oia. Set within the alcoves of 300-year-old caves, the hotel’s 20 rooms have vaulted ceilings and cliff-side terraces. For a romantic dinner, the open-air balcony at Assyrtico Wine Restaurant, in a renovated 1960s mansion in Firá, overlooks the volcanic islands of Nea Kameni and Palea Kameni. Order the flaky pastry-wrapped saganaki (traditional fried cheese) with fig jam and wine from the local Argyros estate, then make your way back to Oia for a stroll along its nine-mile walkway.

Over the past decade, Red City Marrakesh has become Morocco’s style capital, with ever-more-luxurious hotels and shopping. Combine a stay at the Royal Mansour—a palatial, over-the-top resort (and the personal project of the king of Morocco)—with a few nights at the intimate El Fenn, a riad whose courtyard is filled with deep sofas and kilims. For contemporary design, the Guéliz district, with its wide boulevards, is a must-visit. Swing by Studio Lalla for boho handbags and jewelry by Parme Marin. Then, check out 33 Rue Majorelle, which is like a well-edited mini-souk. Browse the cups and plates by Chabi Chic and clothing by Noureddine Amir, then stop at the little café for juice and a salad.

Related: You Won’t Go Wrong With These Valentine’s Day Gifts for Her

Ecuador’s Galápagos Islands continue to lure travelers 600 miles out into the Pacific. Where else can you watch a marine iguana dive for seaweed, with a blue-footed booby circling overhead, or size up short-feathered penguins darting along the equator? Follow in the footsteps of Charles Darwin, who famously explored the area in 1835: there’s prime animal viewing on the largest island, Isabela, which is home to 70 percent of the archipelago’s wildlife. Here, you can visit a tortoise breeding center and snorkel with gentle sharks. Isabela also has the region’s best beach, in the little-known Puerto Villamil, where you’ll spot a variety of marine animals. Cruising remains the best option, and most boats—like the 100-passenger Silversea Galápagos from Silversea Cruises—pair travelers with naturalists. The new carbon-neutral Pikaia Lodge, home to a giant tortoise reserve, is pioneering a hybrid land-and-sea-based experience. The lodge pulls out all the stops: floor-to-ceiling windows, private terraces, and a spa.

With its windswept beaches and dramatic Table Mountain backdrop, Cape Town has a wild beauty and elegance all its own. The unique setting on South Africa’s coast has also given rise to a diverse culinary culture: no city captures global food traditions quite like it. At colorful markets, haute gastronomic temples, and beachside shacks, you can revel in the multicultural cuisine.

Provence, in southeastern France is filled with lavender fields, sleepy fishing villages, Roman ruins, and so many scenic vistas it’s hard to know where to point your camera next. This is also the place for some of the country’s best antiques shopping, wine tasting, and dining—whether at a family-run mas (farmhouse) restaurant, a Michelin-starred temple to haute cuisine, or a DIY picnic of Provençal staples from a local farmers’ market. Among the activities not to miss: a tour of the small resort towns and fishing villages on the Cap d’Antibes; browsing antiques from the dealers along Avenue des Quatres Otages, in L’Isle-sur-la-Sorgue; and throwing back oysters, sea urchins, and white wine with the locals at the fishmongers’ stands at the entrance to the Marché à la Brocante, in Villeneuve-lès-Avignon. Skip the formality of a hotel and rent a villa from Hosted Villas, which has houses that come complete with tips on, say, the best places to eat or the ideal times to visit the market.

A journey through Egypt’s ancient marvels begins 14 miles outside of Cairo, with a visit to the Pyramids of Giza, which date back 4,500 years. Stay the night at the Four Seasons Hotel Cairo at Nile Plaza, a luxurious hideaway with three swimming pools, before hopping a 90-minute flight to Aswan, where you’ll board the steamship Sudan (five-day itineraries from $800 per person). Like most boats that ply the Nile River to Luxor and back, it stops at the temples of Edfu and Kom Ombo before heading to Karnak, a 2,000-year-old city built by the great pharaohs. Luxor, which usually marks the end of a northern-bound cruise, is the gateway to the Valley of the Kings, home to ancient tombs. Unwind at the Hotel Al Moudira, designed after an Arabian palace.

Myanmar is a nation on the cusp of great change, and there’s never been a better time to go than right now, before it loses the look of old Asia. Yangon, the country’s largest city and once a key port in the British Empire, is lined with colonial-era buildings. Here, you’ll see Shwedagon Pagoda, among the holiest sites in Myanmar. Its central stupa is covered in gold—not gold leaf, but thick plates of gold. Stay at the Belmond Governor’s Residence, a 1920s mansion set in the leafy embassy district, and eat at local favorite Feel, which serves excellent noodles. The life of the country truly unfolds along the rivers, so opt for a cruise between Yangon and Mandalay, the last royal capital of the former Burma. AmaWaterways’ new AmaPura offers 10-night sailings with excursions to Salay’s teak monasteries and the Mahamuni Buddha.

After the 2,300-year-old “lost city” Petra in Jordan played a cameo role in 1989’s Indiana Jones and the Last Crusade, tourism exploded from just a few thousand visitors per year to more than half a million today. It’s easy to follow Indy’s footsteps through the Siq, a slot canyon that leads to the Treasury building (its pediments and columns were hewn by hand out of a cliff). But the 400 square miles of desert that make up the Petra Archaeological Site are filled with other dazzling monuments, including a Roman-style amphitheater, cave dwellings, and a massive colonnaded structure called the Monastery, which sits atop a high peak. It’s a steep hike up, so hire a horse or donkey and a guide, who can explain Petra’s history. And start out early to avoid the afternoon heat (and crowds). Stay at the Mövenpick Resort Petra, which has a pool and a prime location just outside the site entrance, and consider tacking on a few days at the Evason Ma’in Hot Springs, an oasis-like resort 3½ hours away.

Zambia is Africa’s great unsung safari destination and unquestionably its best value. Elephants, leopards, crocodiles, hippos, giraffes, antelopes, chirping tree frogs—you name it, Zambia has it, along with superb local guides. And the parks offer a range of experiences seldom combined elsewhere: canoeing, fishing, boat rides, night drives, and, not least, walking safaris, a concept pioneered in Zambia’s South Luangwa Valley by the late naturalist Norman Carr. Experienced Africa hands will appreciate the diversity, but the country also makes a fine introduction for first-timers. Much of its authenticity derives from the lodgings. While big-name safari companies have made inroads, the field is still defined by intimately scaled river lodges and bush camps, many of them founded and operated by Zambians—people like Andy Hogg, who started the Bushcamp Company, a collection of seven well-appointed camps that includes Chamilandu in South Luangwa National Park. There’s also Grant Cumings, whose family runs two beloved properties: Chiawa Camp and Old Mondoro, in Lower Zambezi National Park.

When it comes to Asian megalopolises, Tokyo falls into a category of its own: few cities offer such a dizzying array of restaurants (more than 80,000), luxurious lodging, vibrant nightlife, and legendary shopping, all set against a rich cultural backdrop. Don’t wait until the 2020 Summer Olympics to go.

For more destinations, see the original post on TravelandLeisure.com. We’ve included affiliate links in this article. Click here to learn what those are.