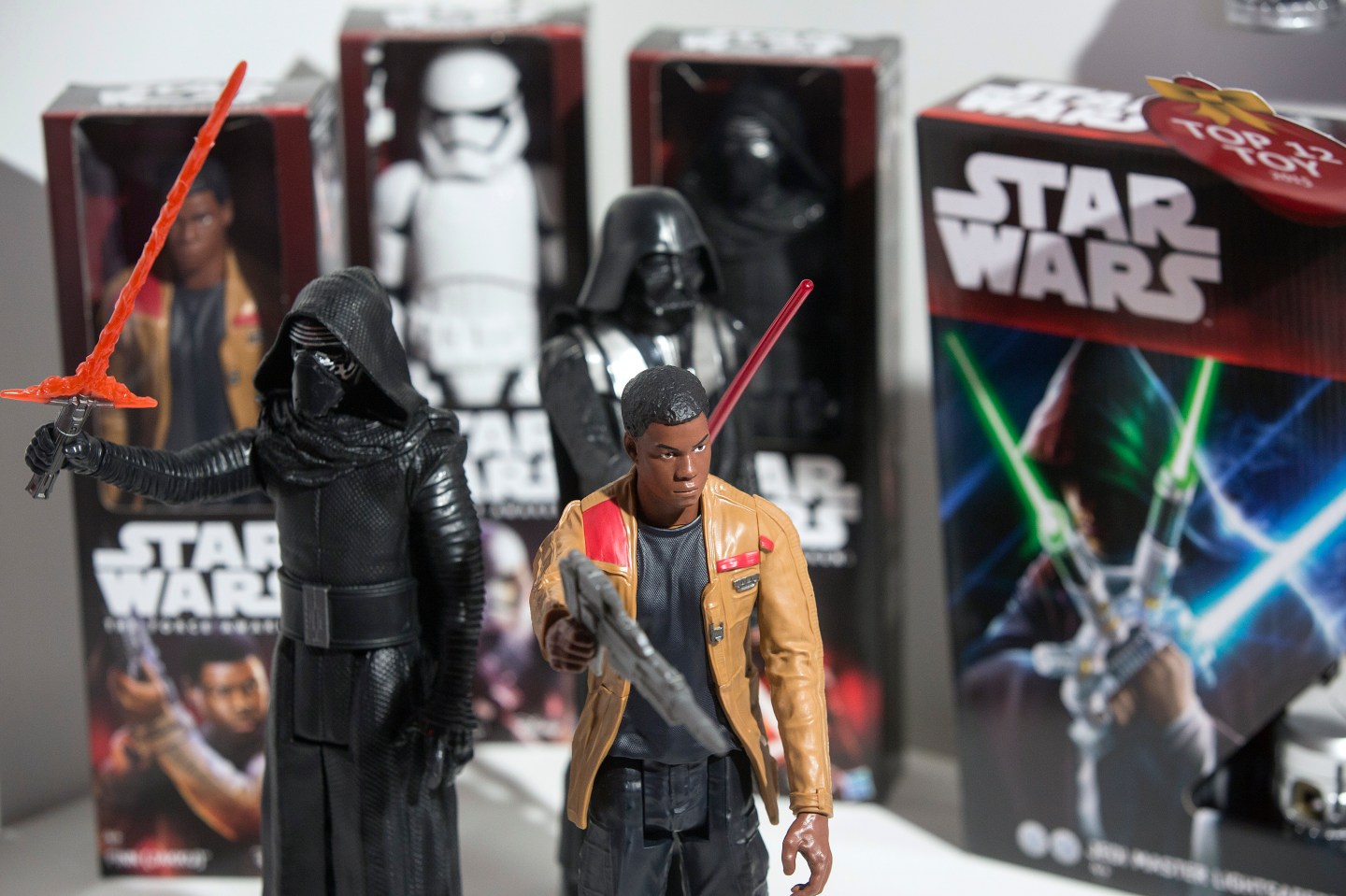 Star Wars action figures, manufactured by Hasbro Inc., sit on display at the Toy Retailers Association DreamToys 2015 event in London, U.K., on Wednesday, Nov. 4, 2015. U.K. economic growth cooled as manufacturing contracted for a third quarter and construction shrank the most since 2012, a sign that Britain may be falling prey to global headwinds. Photographer: Simon Dawson/Bloomberg via Getty Images
Bloomberg Bloomberg via Getty Images

Hasbro’s shareholders got their wish this holiday season: record-breaking sales that topped $5 billion for the first time in the toy maker’s 94-year history.

On Monday, Hasbro reported fourth-quarter sales jumped 11% to $1.63 billion while per-share profits totaled $1.64 apiece—far above the $1.5 billion and $1.28, respectively, that Wall Street analysts had anticipated. Investors cheered the news, sending Hasbro’s (HAS) stock up 15% in Monday morning trading. The results contrast with top rival Mattel (MAT), which last month reported declining sales as it lamented sharp discounting during the key holiday season.

“We finished the year strong. Hasbro ranked number one in the industry for the month of December, among the top nine markets tracked by NPD,” Chief Executive Brian Goldner told analysts during a presentation. “Importantly, the industry is growing and continued to grow through 2016.”

The strength of Hasbro’s results contradict a narrative that has formed in the retail sector in which many executives have lamented that spending during the holiday season has focused on two periods of time: the Thanksgiving/Black Friday holiday weekend and the final week before Christmas. The first three weeks of December, however, have seen a lull in retail traffic and spending that has resulted in discounting wars. But Goldner said the holiday season wasn’t different for Hasbro than other years.

It helps that Hasbro has got a December ace up the company’s sleeve. Hasbro is a main licensing partner for Walt Disney’s (DIS) popular Star Wars property, which last year fueled the industry’s sales. Disney has made a habit of releasing Star Wars films late in the year: both Star Wars: The Force Awakens and Rogue One: A Star Wars Story came out in December. As a result, Hasbro gets a late-season boost from the property as well as a long runway to boost sales the following year when sales for toys are typically light.

Though Star Wars revenue declined slightly for Hasbro in 2016, the company said it is confident it will sell through inventory in the first half of 2017 as it ships more new products to retailers. Hasbro will also benefit again from the release of Star Wars: The Last Jedi later this year.

The close relationship with Disney has helped Hasbro become a far more dominant force in the toy aisle. Hasbro won the key Disney Princess license from Mattel and 2016 was the first year that Hasbro began to make toys under the pact. As a result, the company’s “girls” business—which also includes My Little Pony and Dreamworks’ Trolls property—posted a 50% sales increase last year.

Toy experts say that 2017 will be another strong year for the industry as there is an unusually high number of major motion pictures being released by Hollywood—content that generally leads to stronger sales for companies like Hasbro, Lego, and Mattel.

Hasbro has two major films based on the company’s own brands, Transformers: The Last Knight and My Little Pony. Films that the toy maker holds key licenses to include a live-action Beauty and the Beast and a sequel to Guardians of the Galaxy.