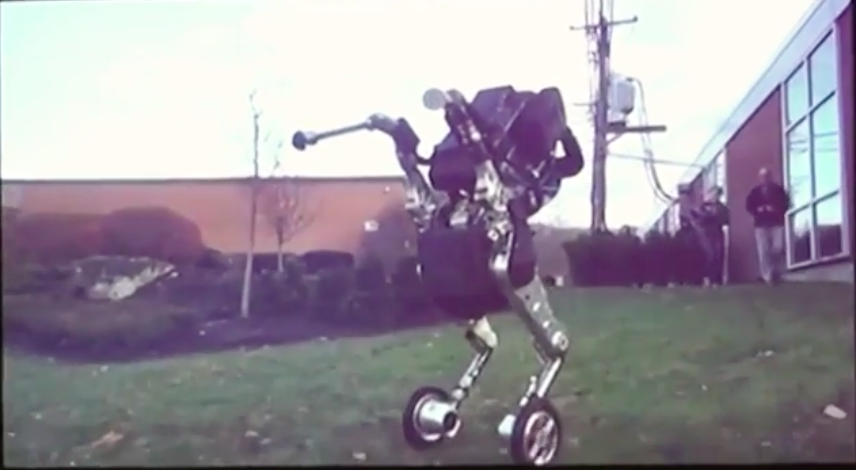 A video has surfaced revealing the latest creation by Boston Dynamics, a Massachusetts-based robotics firm owned by the “X” division of Google’s parent company Alphabet.

The footage shows a hybrid wheeled-legged robot capable of crouching, twirling, leaping, and zipping around on its hind-limbs. In the video, the machine smoothly navigates different terrain, including concrete and grass.

“This is the debut presentation of what I think will be a nightmare inducing robot,” said Marc Raibert, founder and CEO of Boston Dynamics, cracking a joke at the expense of his company’s inventions, which have a knack for inspiring existential anxiety in human observers, on Tuesday. Raibert, wearing a characteristic Aloha shirt, introduced the automaton at the Abundance 360 summit, a futurist conference for entrepreneurs and venture capitalists in Beverly Hills, Calif.

“This is much more efficient than a legged robot,” Raibert told the audience at the Beverly Wilshire Hotel, a Four Seasons property in Beverly Hills. “It can carry a reasonably heavy load on a small footprint,” he said.

Among the attendees of the event organized by Peter Diamandis, founder of the non-profit X Prize Foundation and an alum of Fortune’s 2014 World’s Greatest Leaders list, was Steve Jurvetson, a partner at the venture firm DFJ Capital and board member at SpaceX. Jurvetson filmed the demo on a phone and uploaded his recording to YouTube soon after.

Initially uncensored, the video later displayed a “blur box,” obscuring the visuals of the segment that featured the new robot. Eventually, Jurvetson withdrew the privacy protection.

“there has been some back and forth on this [sic],” Jurvetson posted in the comments section. “i removed the blur for now.”

“Now the scary robots have wheels, and can jump around!” Jurvetson posted on his Facebook page alongside a link to the clip.

According to Raibert, the Boston Dynamics team named the robot “Handle,” “because it’s supposed to handle objects, eventually,” he said. (For now, the prototype model appears to bear maladroit peg-arms.)

Raibert’s firm has gained notoriety over decades for churning out machines that move in ways uncannily similar to living beings. The company’s four-legged “BigDog,” created in 2005 with help from a military grant, was scrapped at the end of 2015 for being too “loud,” a problem for foot-soldiers trying to remain under cover.

Boston Dynamics unveiled another signature invention, its bipedal ATLAS robot, in July 2013. Before the end of the year, Google snapped up the firm for an undisclosed sum as part of a robotics shopping spree.