Theresa May Can’t Count On Donald Trump to Save Britain 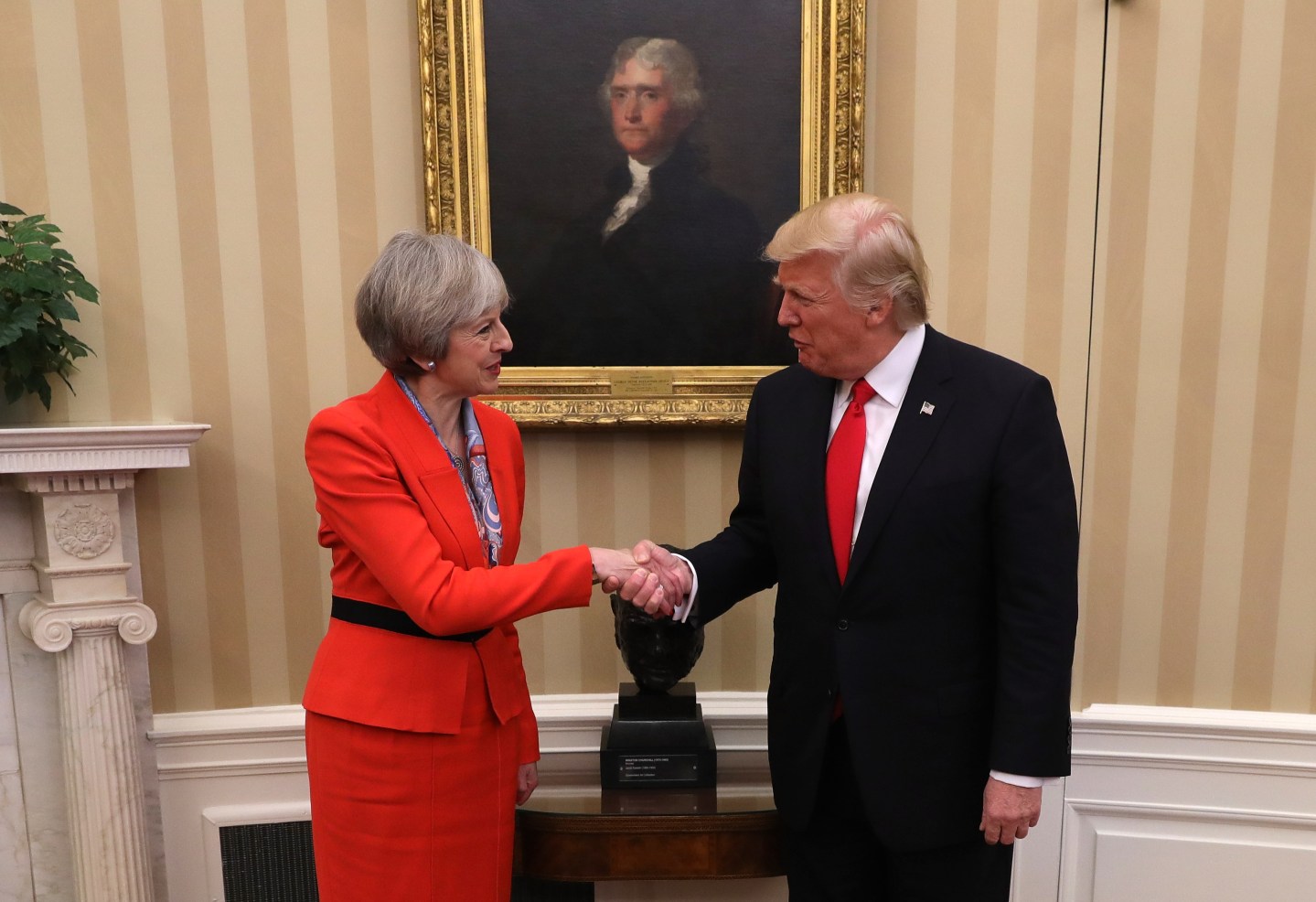 WASHINGTON, DC - JANUARY 27: British Prime Minister Theresa May shakes hands with U.S. President Donald Trump in The Oval Office at The White House on January 27, 2017 in Washington, DC. British Prime Minister Theresa May is on a two-day visit to the United States and will be the first world leader to meet with President Donald Trump. (Photo by Christopher Furlong/Getty Images)
Christopher Furlong — Getty Images

UK Prime Minister Theresa May and US President Donald Trump met in Washington recently, proclaiming they would trade “more than ever” once Britain had left the Europe Union. May said: “This is the first step to a future trade deal with the US which could provide huge benefits to our economic muscle and will give businesses additional certainty and confidence.”

This kind of breathless boosterism about trade was last heard in the 1990s when U.S. President Bill Clinton rammed NAFTA, the North American Free Trade Agreement, through Congress. It is certainly not shared by his successor in the White House. President Trump has consigned the proposed Trans-Pacific Trade Partnership to the trash can. He has also threated to impose $35,000 worth of tariffs on cars made in Mexico and his language on Mexico generally hardly supposes a warmth on trade relations between the two countries.

The US is an important trade partner with Britain. In November 2016, the UK exported £4.4 billion to the US, but more than three times as much – £14.1 billion to the EU. The difference is that any British firm, bank, investment fund, food producer, movie-maker can go anywhere in 27 EU member states and try their luck with 450 million mainly middle class consumers. A US or Japanese or Brazilian firm in London or Edinburgh has the same right to trade anywhere in the world’s biggest market because there are simply no barriers to trade.

That is why 1000 Japanese firms, many blue-chip global names, set up in Britain on the solemn assurance from the then prime minister Margaret Thatcher and her successors that they would have full, unfettered access to the European Union Single Market.

May has now made clear she wants Britain to leave the Single Market unlike Switzerland or Norway, which are not members of the political European Union, but have come to deals with Brussels so they operate freely in the Single Market.

As the senior German official negotiating Brexit told me in Berlin last week “Once the UK leaves the EU you become a third country.” That means Britain has the same status as Colombia or South Korea with the EU and must negotiate product by product, bank by bank, access to the EU Single Market.

Can the US replace this? In 2006, the U.S. and Switzerland tried to pass a trade and investment cooperation forum agreement in order to broaden U.S.-Swiss economic relations but gave up, as different lobbies in Congress blocked access for Swiss exports. President Trump can talk trade, but the details are decided on Capitol Hill and in recent years trade has become one of the most toxic of all political issues. Every campaigning group from the green lobby to labor unions, from animal safety campaigners to scores of professional bodies like lawyers who are not going to give up protectionist regulatory measures to let Brits roam freely selling whatever food, professional services or insurance and other financial products they like.

Similarly, most British will react in horror at being told they must eat hormone stuffed meat or chlorine washed chickens the US agro-industry would like to include in any trade deal. Nor will the Brits take kindly to letting US big pharma into the British National Health Service, which is as revered as the Queen in England. Nor will they want to see the BBC weakened to allow more US-made TV shows conquer airspace in Britain.

No trade deal can start until after the UK quits Europe in 2019. The following year, 2020, is election year in both America and Britain. Putting controversial trade proposals into the headlines will hardly appeal to politicians on either side of the Atlantic.

There is an example of the Australian-US Free Trade deal (AUSFTA) signed between George W Bush and John Howard, the right wing Australian premier in 2004. A 2105 study by the Australian National University showed that AUSFTA resulted in a fall in Australian and US trade with the rest of the world. Estimates also show that AUSFTA is associated with a reduction in trade between Australia and the United States.

America is not going to abolish its Buy America legislation or allow low-cost British airlines to fly passengers to America for $200. Both Trump and his presidential campaign opponent, Hilary Clinton, attacked the proposed Transatlantic Trade and Investment Partnership (TTIP), which was also rejected by European political leaders and the European Parliament.

The idea that President Trump will reinvent himself as a free trader just to help May as she struggles to persuade Britain that severely reducing trade access to the world’s biggest market on Britain’s doorstep is a sensible idea is far-fetched. Trade politics is treacherous, tricky and hard to get political support for.

Since 2010, Britain has been trying to persuade India to cut its 150% tariff on a bottle of Scotch. The Indians have said they are happy to do so and in exchange Britain should allow any Indian who wants to study in the UK to do so visa-free. But Britain’s Home Secretary has opposed, suggesting that controlling our borders and limiting immigrants is far more important than sales of Scotch. That Home Secretary and her obsession with controlling access to her country is now the Prime Minister.

She may have held hands with the most openly protectionist US president since 1930 but the warm words of a magical US-UK trade deal are unlikely to see the light of day.

Denis MacShane is a former UK Europe minister during the Tony Blair administration. He is author of Brexit: How Britain Will Leave Europe. He is a senior advisor at Avisa Partner’s Brussels.