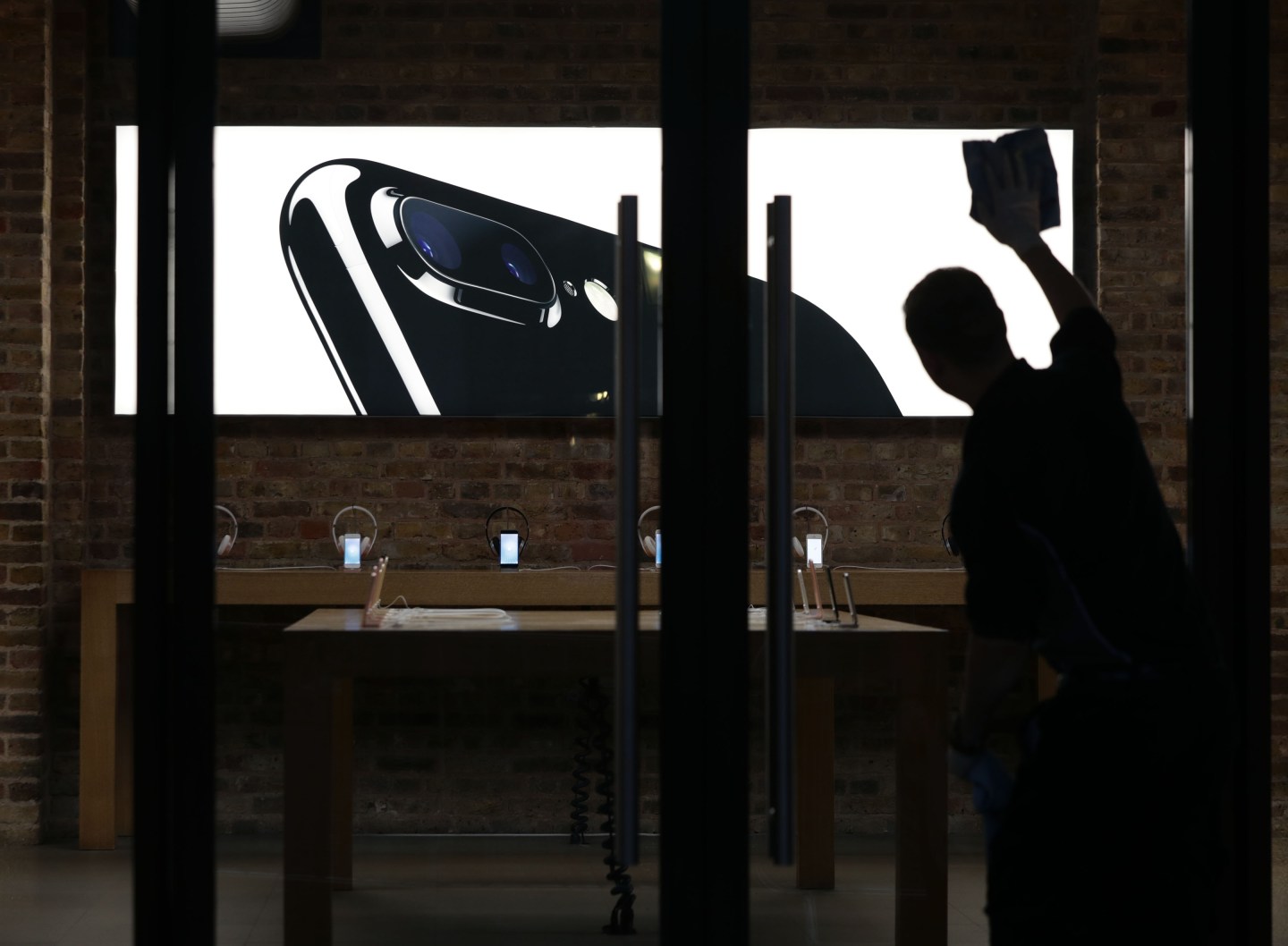 Apple iPhone 7 goes on sale. A staff member cleaning a window at the Apple Store in Covent Garden, London, ahead of the iPhone 7 launch. Picture date: Friday September 16, 2016. The iPhone 7 and 7 Plus will both come in two new black finishes and are water resistant for the first time. See PA story TECHNOLOGY iPhone. Photo credit should read: Yui Mok/PA Wire URN:28654747
Yui Mok — PA Wire/AP

Apple, on Tuesday afternoon, is set to report its fiscal first quarter earnings. (Apple’s fiscal year ends in September.) The iPhone maker is predicted to have profit of $3.22 a share, according to Thomson Reuters, down slightly from a year ago.

The computer company could do better than expected. In advance of the announcement, Analysts had lowered their numbers based on the concern that the iPhone 7 launch was more ho-hum than even predicted. That leaves room for upside. But if Apple does report a drop in earnings, the market overall may not notice as much as it used to. The reason: Apple’s just not as important as it used to be, at least when it comes to the market.

And that 6.6% is the highest percentage Apple has had all year. In the second quarter, Apple made up just 3.5% of the S&P’s overall earnings, down from 5% the year before that. Apple’s first quarter earnings are always the company’s strongest because of its reliance on the iPhone. Sales of the iPhone, which typically debuts a new model in the fall of every year to much fanfare, generate a huge chunk of the company’s profits. Indeed, Apple likely sold 78 million iPhones for this past quarter, according to Factset, even with the likely soft iPhone 7 launch.

The drop is in part because Apple’s earnings are not as ripe as they used to be. But also because earnings at fast growing tech rivals such as Google (GOOG) and Facebook (FB) continue to rise.

That being said, Apple is still the market’s earnings king, despite its diminished rule. The iPhone maker’s earnings, when adjusted for the indexes’ weighting, still contributes more to overall S&P 500 profits than any other company. By comparison, J.P. Morgan Chase and Microsoft come in at number two and three, respectively.

So Apple’s earnings haven’t fallen all that much when it comes to market influence. But the company’s grip on the market, which commentators long used to complain about, is withering.