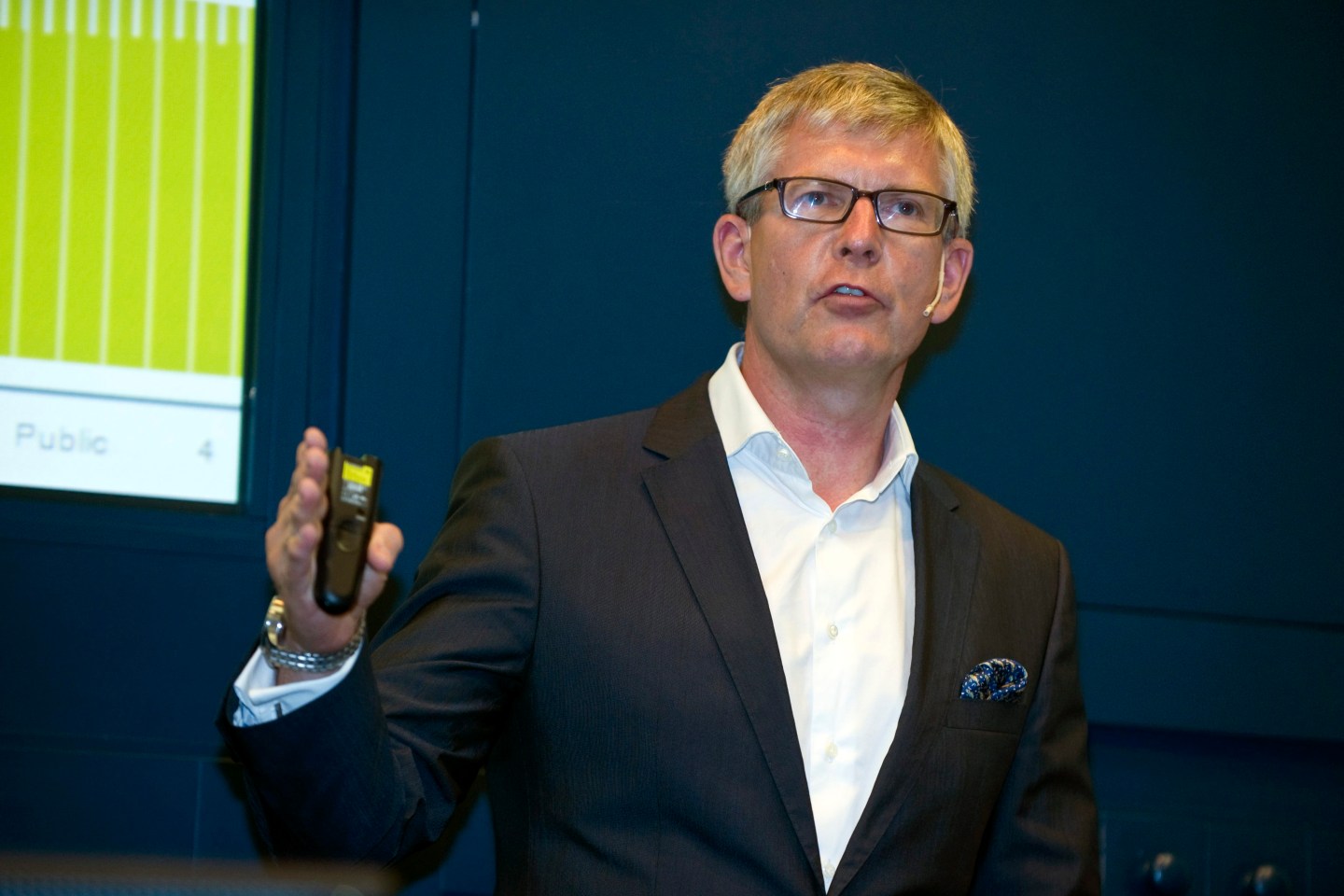 Ten days into his new job as CEO of telecom equipment maker Ericsson, Borje Ekholm on Thursday faced the difficult task of explaining the company’s tough fourth quarter results and outlining a vision for the future.

The Swedish businessman and board member took over the top job six months after the ousting of his predecessor Hans Vestberg and a brief interim stint by former CFO Jan Frykhammar. Vestberg was criticized for poor leadership and excessive pay, not to mention the company’s weak response to sharper competition from Nokia (NOK) and Huawei amid softening market conditions.

Now all those problems are Ekholm’s problems. He plans to focus first on improving profitability by cutting costs, including a difficult decision this week to slash Ericsson’s stock dividend by almost three-quarters to 1 Kronor (or about 11 cents). With revenue down 10% in 2016 and forecast to decline another 2% to 6% this year, the payout had to drop as well, he explains.

“We want to have a strong financial position in order to invest in future growth areas,” he tells Fortune. “And we want to have a new base from which we can gradually grow the dividend.”

For the fourth quarter, Ericsson (ERIC) on Thursday reported a net loss 1.6 billion kronor ($181 million), compared with a 7 billion ($791 million) Kronor profit a year earlier. Revenue was down 11% to 65 billion kronor ($7.3 billion)

Ahead lie the hard decisions that many peers have already made. Some business units must be shuttered so that the company can focus its resources on higher potential growth areas, Ekholm says, without signaling what might stay or go. Analysts say the media broadcast equipment effort started under Vestberg may be cut. It’s the same chop and focus strategy that many tech companies are pursuing, from chipmaker Intel (INTC) to hardware and services behemoth IBM (IBM).

“You need to invest in areas where you can be the market leader because then you get a disproportionate share of the economics when you are,” he says. “So for us, it’s really important that we decide in what areas we are going to play. The areas we’re going to play in we need to win, as well. That’s really our top priority and that will require some tough decisions.”

Ericsson has been hurt by the wireless industry’s slow transition to next generation 5G standards, but a renewed emphasis on speeding up current 4G LTE networks to gigabit speeds could help. “Gigabit LTE will be an important technology evolution because that puts demands on the rest of the network to basically be 5G-ify it,” Ekholm says.

For more on exponential growth of Internet use, watch:

Ultimately, Ekholm is confident that wireless operators will need to spend more on equipment because their customers continue to use ever larger amounts of data.

“The end demand, the growth in traffic, is still growing at an exponential rate,” he says. “We see increasing use of mobile e-commerce, streaming, other types of gaming applications. That’s driving the demand for traffic. Over time, you would have to see operators coming back to build out capacity.”