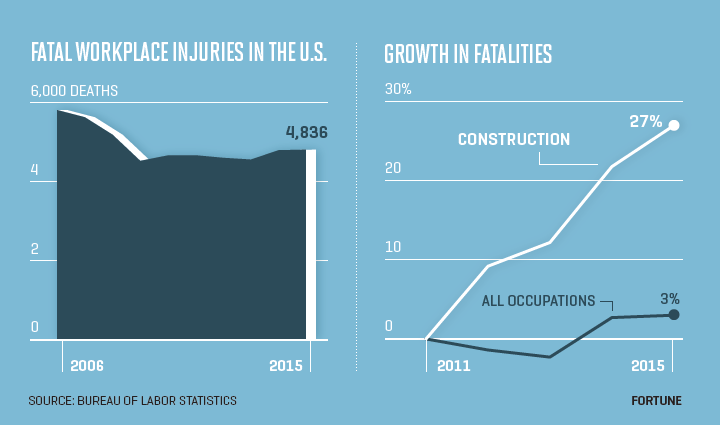 First, the good news in American workplaces: Four decades ago, 14,000 U.S. workers were killed on the job each year. Now, that number is closer to 5,000.

American workplaces have been getting safer for decades, as jobs get safer and safety standards rise. That trend hit a bump in the latest BLS report, with workplace deaths ticking up slightly in 2015. But nonfatal injuries were down for the year—hitting 2.9 million, 48,000 less than the year before, and marking the 13th straight year of decreases.

But not every industry is enjoying a decline in the number of accidents. As the construction industry climbs back toward its pre-recession peak, accidents are rising with it. There were 937 fatal work injuries in private construction in 2015—the highest number since 2008.

While deaths in the construction sector make up a plurality of overall worker fatalities in the U.S., construction work is still not the most dangerous job in the U.S. The profession with the highest rate of workplace accidents was logging, with 133 injuries per 100,000 full-time equivalent workers. And the profession with the highest rate of fatal accidents were truck drivers, with 885 fatal accidents per 100,000 workers.

A version of this article appears in the February 1, 2017 issue of Fortune with the headline “U.S. Workers Are Safer, but Not in All Jobs.”