Note to the Media: Don’t Get Played by the Trump White House 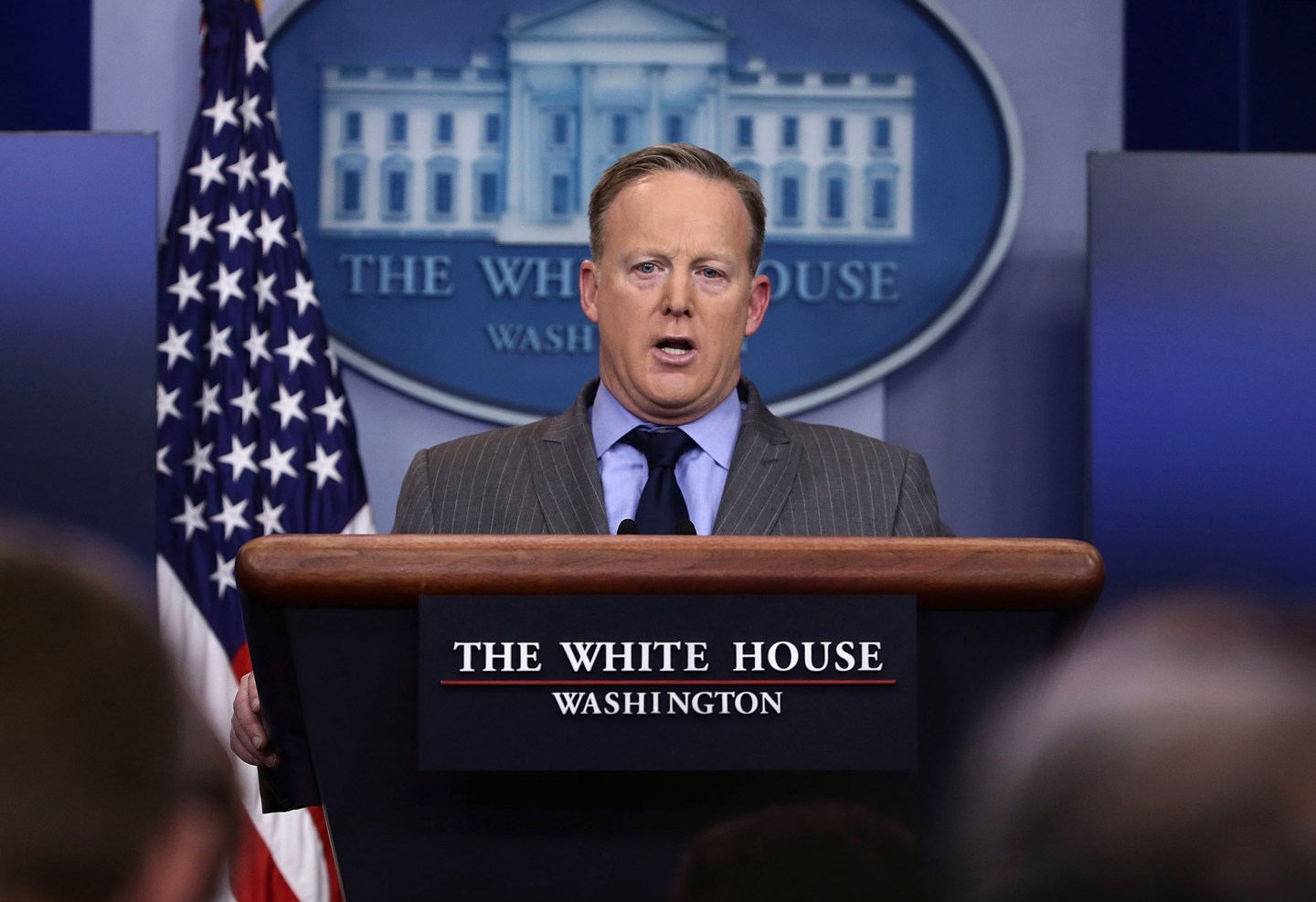 WASHINGTON, DC - JANUARY 21: White House Press Secretary Sean Spicer makes a statement to members of the media at the James Brady Press Briefing Room of the White House January 21, 2017 in Washington, DC. This was Spicer's first press conference as Press Secretary where he spoke about the media's reporting on the inauguration's crowd size. (Photo by Alex Wong/Getty Images)
Photograph by Alex Wong—Getty Images

At the Trump administration’s first official White House press briefing on Monday, press secretary Sean Spicer was clearly trying hard to overcome some of the negative impressions he had created with his performance just a couple of days before, after the inauguration of his boss as the 45th president of the United States. But should we buy this new nice-guy act?

The short answer is no. Trump has made it clear—both during his campaign and since being elected—that he sees the media as untrustworthy and beneath contempt, and Spicer’s attack on the press following the inauguration seemed a lot more sincere than his attempts to apologize for it.

Just to recap, the press secretary went ballistic on Saturday, after numerous reports pointed out that Trump’s inauguration ceremony in Washington drew much smaller crowds than the inauguration of his predecessor, Barack Obama. Photos were posted and shared on social media that confirmed this fact, and the New York Times even wrote a story quoting crowd experts.

Despite this, however, Spicer maintained at a press briefing on the weekend that Trump’s crowd was much larger. “This was the largest audience to ever witness an inauguration,” he said. He added that attempts by the media to “lessen the enthusiasm” of the Trump ceremony were “shameful and wrong.”

Trump spokeswoman Kellyanne Conway went on NBC on Sunday and maintained that Spicer was not telling untruths about the inauguration—he was simply presenting “alternative facts.” And she talked about how the Trump administration was going to have to rethink its relationship with the press because of the attacks. Chief of staff Reince Preibus said they would fight the press “tooth and nail.”

Given this performance, all eyes were on Spicer for his first actual briefing inside the White House on Monday, to see whether he would moderate his behavior or apologize for over-reacting. And many in the press corps seemed pleased when he struck a friendlier tone.

As pleasant as the press secretary may have seemed, however, media organizations should be careful not to let themselves get sucked in by this strategy of criticism followed by apology or back-tracking. It feels a little like the classic abusive-husband approach, with punches followed up by flowers, in order to create a dependent relationship.

In fact, this has been Trump’s strategy from the very beginning of his campaign: Pen the media up during rallies, encourage the crowd to yell at them and remove their accreditation in retaliation for stories you don’t like. Then later, give the accreditation back and single out one or two outlets for interviews.

After the election, Trump and his administration—including Spicer—first stacked the White House briefing room with staff and other lackeys, restricting space for working journalists, and then mused publicly about getting rid of the traditional briefing process altogether. They appear to have back-tracked on that as well, at least for now.

In almost every case, Trump takes two steps backwards and then one step forward, encouraging the media to be thankful for the forward step, because it could have been much worse. And Spicer clearly knows that the White House holds all the cards when it comes to the official press corps—it decides who gets accredited, where they sit, and who gets to ask questions.

That control was subtly reinforced on Monday when Spicer gave the first questions to the New York Post and a religious TV channel, rather than to the top print and TV outlets, as is standard practice.

Statements like the one Spicer just gave are why access journalism does not matter in the age of Trump. Investigative journalism matters.

Despite Spicer’s attempts to mollify the press in his Monday briefing, anyone who wants to keep reporting on the president and his administration—whether it’s from inside the White House or outside it—needs to be aware that the core tendency of the new team in Washington is to attack the press whenever possible, in order to increase the mistrust that Americans have towards it.

Trying to behave properly so that the president and his press secretary don’t get mad at you isn’t any way to conduct real journalism. As Margaret Sullivan said in the Washington Post on the weekend, Spicer’s statement on Saturday “should be seen for what it is: Remarks made over the casket at the funeral of access journalism.”

Over the next few months, it will become obvious who has decided to play the White House’s game in order to get behind-the-scenes access, off-the-record briefings, or invitations to parties at Trump’s Mar-a-Lago estate. When reports draw a false equivalence between the actual facts and the president’s so-called “alternative facts,” then you will know a line has been crossed.