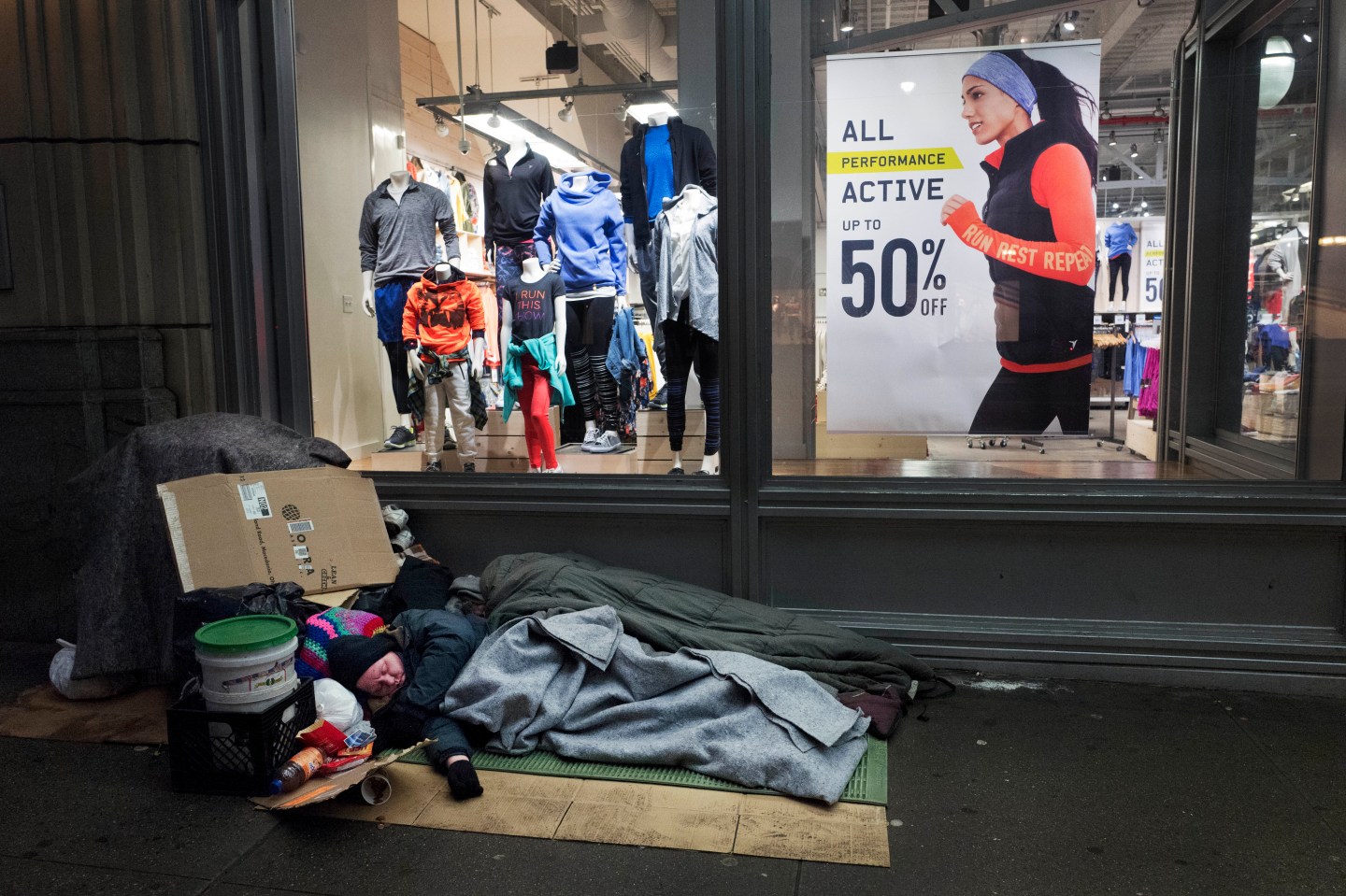 The 2016 presidential election is said to have been won and lost by the working class of America. President-elect Donald Trump spoke frequently on the campaign trail of fighting for the “forgotten men and women of this country”—the working-class men and women who, he argued, were struggling to get by and had been forgotten by their government. But if he wants to reassure America during his inaugural address that he speaks for all of us, then he needs to address a group of hard-working men and women who he didn’t acknowledge on the campaign trail: the homeless.

Homelessness is not without costs. In 2012, the head of Housing and Urban Development (HUD) stated that the cost to taxpayers to provide for a homeless individual on the street was $40,000 (between costly emergency room visits, jail/arrests, and shelters). By contrast, providing supportive housing for the same person is estimated to cost between $13,000 and $25,000 per year.

As the head of Win, New York City’s largest provider of shelter, supportive housing, and services for homeless families and children, I am deeply concerned that Trump’s nominee for HUD secretary, Ben Carson—whose single mother relied on public assistance for a time—has expressed disdain for those who need government support. He has suggested that hard work is the only solution for people in need. While it certainly is a part of the equation, it by no means is the only answer.

Unfortunately, working hard is not enough to prevent or escape poverty and homelessness. As the president-elect and his HUD-designee are well aware, wage stagnation, lack of affordable housing, domestic violence, and illness can all play a role. At any given moment, approximately 51% of Win’s work-eligible moms are employed, and 91% have a history of employment.

Most Win clients report work experience in low-wage industries like retail, food service, cleaning, maintenance, and clerical. While these industries have grown, they are also some of the most likely to have experienced wage stagnation or a real wage decrease.

Real hourly wages have declined most sharply in the U.S. for women without a college degree—many of whom supported the president-elect. Among Win moms, a high school diploma was the highest level of education completed by approximately 36.5%, and 49.3% had less than a high school diploma.

Jobs typically held by homeless mothers are often characterized by unpredictable hours and rigid scheduling that can be difficult to balance with parenting. They make it challenging to juggle children’s schooling, childcare, a second job, and financial planning. Unpredictable hours may make it difficult to fulfill work requirements tied to housing subsidies or other government benefits, limiting already scarce options. These conflicts can result in frequent job changes and periods of unemployment, making it extremely difficult to gain the seniority and experience needed to qualify for jobs with higher pay or better schedules.

The federal government has incredible power to impact homeless policy. Under the Obama administration, it did so to great effect: Since 2010, the total number of homeless people declined by 14%.

HUD also announced agreements resolving discriminatory zoning allegations and housing complaints, and charged landlords with bias against residents with disabilities and banks with unfair lending practices. These initiatives are making a real difference in urban communities, and they create important momentum for the next administration’s efforts.

But the federal government—including HUD and the departments of Labor, Health and Human Services, and Education—must continue to work together with states and cities to combat homelessness by recognizing that it is the acute manifestation of the struggle of working people. It requires that the incoming administration works to not only encourage manufacturers to keep jobs in America, but to embrace the immediate needs of families who are already homeless, including:

Policy solutions must focus on long-term stability by approaching families holistically, and prioritizing housing solutions that emphasize leadership, accountability, and collaboration among federal agencies. The alternative would be devastating to homeless families. The Los Angeles Times notes that President Reagan’s HUD Secretary Sam Pierce “implemented nearly $20 billion in cuts to HUD’s subsidized housing programs,” and that by the end of his presidency, “nearly 10 million additional Americans had fallen below the poverty line and more than 2 million people had become homeless, despite rising federal spending overall and dramatic tax cuts for the wealthy.”

It’s too early to tell whether or not the president-elect is committed to ensuring that this neglect never happens again. But here’s what is clear: The nation will never thrive under the leadership of a politician who pits the working class against itself. Breaking the cycle of homelessness requires us to recognize that the “forgotten face of homelessness” has a lot in common with the “forgotten men and women” who received so much attention this election cycle. Championing one while ignoring the other isn’t populism; it’s tribalism. Our entire nation deserves better.

The president-elect must demonstrate that his fight for forgotten men and women applies to all Americans in need. That’s what he promised. On behalf of the 4,700 people who stayed at a Win facility last night, my strong hope is that he’s as good as his word.

Christine C. Quinn is president and CEO of Win (formerly Women in Need), the largest provider of shelter, permanent supportive housing and services for homeless families and children in New York City. She is also vice chair of the New York State Democratic Party.