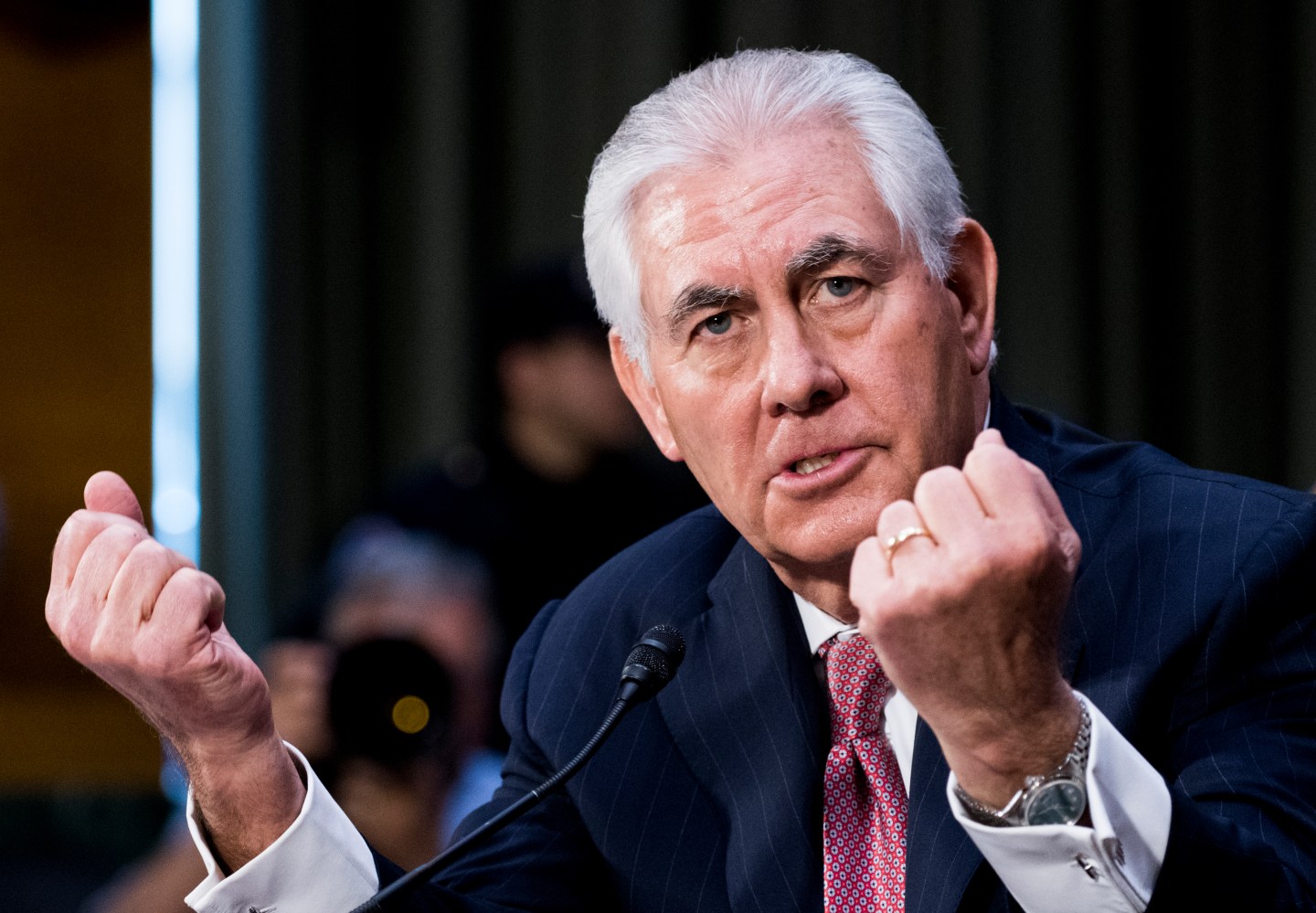 Rex Tillerson, Donald Trump’s pick for Secretary of State, may be able to sidestep an $80 million tax bill in 2017. But the growing possibility that he might not could create a major headache for Tillerson as well as for his former company Exxon.

At Tillerson’s confirmation hearing on Wednesday, the former Exxon Mobil (XOM) CEO got a number of questions about his conflicts of interest. His biggest conflict by far is his huge interest in Exxon, through the direct ownership of about $54 million worth of shares, plus another $175 million in a financial contract called restricted stock units (RSUs). Those units entitle Tillerson to receive Exxon shares in the future for his past years of service. At the hearing, Tillerson reiterated his plan to fully divest himself of his shares and interest in Exxon. He seemed to get little pushback from the Senators on his divestment plan.

Nonetheless, a number of tax attorneys and pay experts are crying foul. They say that the trust set up with the proceeds from Tillerson’s RSUs creates a taxable event, and if Tillerson does not pay what he owes this year, he will be violating the law. Robert J. Jackson Jr., a law professor and executive compensation expert at Columbia University and a former Obama administration Treasury Department official, told the New York Times, “Everything in the trust is his property today, which means he must pay tax on it.”

But that may not be correct. The difference of opinion has to do with two competing sections of the tax code regarding deferred compensation, section 409A and 83. The tax lawyers and pay experts saying Tillerson owes nearly $80 million in taxes—about $70 million in income and another roughly $8 million in Medicare tax— are now siding with 409A. That section requires that you pay taxes for any compensation award that you get, even if the actual payment isn’t going to transfer to your bank account until sometime in the future.

The rub, tax expert Robert Willens says, is that 409A was never meant to apply to restricted stock units, or stock options, where the final payout is at risk. If the stock drops, or the company goes bankrupt, the RSUs could end up being worth a lot less, or nothing at all. That’s where section 83 comes it. It says that in deferred compensation arrangements, if there is a substantial risk of non-payment, then no taxes are owed until the taxpayer actually gets the money. And RSUs are deemed to have a substantial risk of non-payment.

Here’s where it gets a little bit murkier, though. Tillerson’s pay in question is currently in RSUs. But in order to divest himself of his interest in Exxon stock, the oil giant is converting his RSUs and turning them into cash, and depositing them into a trust. Fortune detailed the plan that Exxon and Tillerson put together that allows him to defer his tax bill last week. The trust preserves the same vesting schedule as the RSUs, so Exxon and Tillerson are arguing that the tax treatment should be the same. But now that the money in the trust is in cash and not RSUs, section 409A could kick in, requiring Tillerson to pay upfront.

Willens, the tax expert, says that’s not so. Included in the trust agreement, which is in place for 10 years—two years longer than Trump could ever serve as president—is a clause that says if Tillerson returns to the oil and gas industry, in any capacity, not just as an executive at Exxon, but consultant or lobbyist or whatever for anyone, then he has to forfeit whatever remains in the trust. Willens argues that Tillerson’s main expertise is in the oil and gas business, so there is a real possibility that he will return to the industry in some capacity. And that means, because of the risk of non-payment, the trust still qualifies for treatment under section 83.

Whatever the actual outcome, the continued uncertainty around Tillerson’s tax bill looks bad for Exxon. The oil giant made a giant exception to its compensation rules in allowing Tillerson to cash out. And the questions over whether Tillerson owes taxes or not highlights the lengths to which the company has gone in order to craft a plan that will allow him to lower his tax bill, at least for now. And any extra lengths Exxon goes to on Tillerson’s behalf will also add to the appearance of a conflict of interest, as anything Tillerson does that ends up helping Exxon could be seen, perhaps rightly so, as payback.

If the tax plan has to be defended to the IRS, there will likely have to be some coordination between Tillerson’s tax lawyers and Exxon’s. Any coordination there could draw out Tillerson’s conflict with the company. Tillerson has said he will recuse himself for one year on any issue that has to do with Exxon.

An Exxon spokesperson said, “Rex Tillerson would pay any legal expenses relating to his own tax claims.”

Tillerson has an easy way to rid himself and Exxon of any perceived special treatment: Just pay the taxes now, upfront. It’s a lot of money to come up with, but he doesn’t have to. The trust could be structured so that it pays the tax upfront, from money in the trust, before it ever gets to Tillerson, removing the issue completely. But of course, that would mean Tillerson would have to give up any extra capital gains he would get on the money between now and when the taxes are owed under the current structure. Tillerson would also possibly be giving up the ability to benefit from Trump’s proposed lower income taxes in the future. But it’s not a lot of money and Tillerson is already a very rich man.

My colleague, and boss, Alan Murray, argued in a story that the Tillerson tax issue is not that big of a deal in the grand scheme of issues that Trump’s new administration has to deal with. And Murray is right. Tillerson isn’t dodging any taxes. He will still have to pay the $80 million or more. Whatever benefit he gets from the delay and diversification is real, but small, so small it’s hard to calculate. But if you believe there is a problem with the revolving door in Washington—and given Trump’s victory there is pretty good evidence that a fair amount of Americans do—we should oppose any grease that allows that door to swing any more freely.