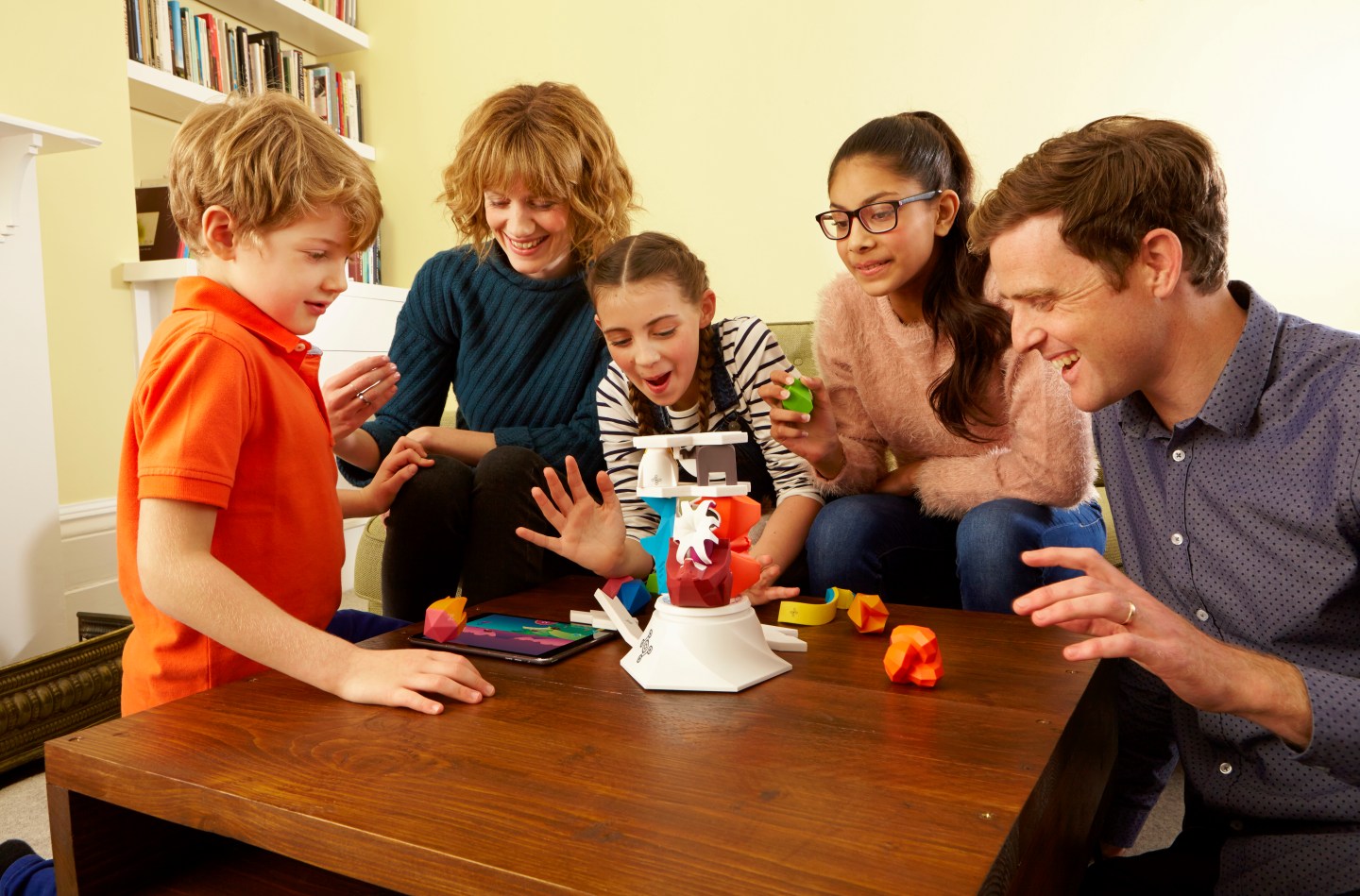 Brio bores my boy. There, I said it.

The little wooden trains — the darling toy of generations of well-meaning parents — can barely hold my 2-year-old son’s attention for fifteen minutes before he tramples the tracks like a giant toddler monster. This is distressing on multiple levels, not the least of which being: What does an overworked guy like me need to do to get some low-impact dad time?

The answer is a dirty little secret parents know all-too-well: Hand your kid an iPad and you’re off the hook. The flashing lights and colors are like digital catnip to kids, and even dangling a smartphone in front of their eyes is enough to snap a melting-down toddler back into line.

Of course, there is the guilt of using a screen to (more or less) sedate your child. But times have changed, and now a bunch of great, new, tablet-connected toys (as well as the American Academy of Pediatrics’ recently-relaxed screen time guidelines), can get you over that angst.

The first app-enabled toy I rolled out for my little one was Sphero’s Star Wars BB-8. When I was my son’s age, I dreamed of having an R2-D2 that could do just half of the tricks this $199 droid can perform. But never in my wildest imagination did I think a phone would be driving its artificial intelligence. Apps? Back then, that’s what we called the popcorn we’d get at the Ground Round before being served meals priced according to our weights. And my toddler has no idea what an app is either.

“A kid doesn’t care if a toy has an app — the kid wants the toy to be fun,” says Adrienne Appell, a toy trend specialist for the Toy Industry Association.

When apps first came onto the scene, there was a big effort to pair them with toys, but this pushed attention (and eyes) towards the screens, not the playthings. A perfect example of this was Disney Infinity, the ill-fated toys-to-life ecosystem that let kids play video games as characters whose physical figurines they (or their parents) bought in stores. But through toys like Sphero’s BB-8 — and this year’s hit robot, Anki Cozmo — the app has faded into the background, keeping the attention on the physical toys and making real world play the focus.

Anki has long held the pole position in app-connected toys. Founded in 2010, three years after the release of the iPhone, the company released Anki Drive in 2013, taking race car games off the screen and plopping them onto the floor in front of you. A sort of slot car racing for the digital age, Anki Drive (and Overdrive, Anki’s newest version featuring a track-dominating truck) was something my son and I have enjoyed together, from arranging the track to watching the vehicles zip around. In this case, the connected device serves as the car’s remote control — and is hardly a ‘screen time’ concern.

Paraphrasing Appell, the thing that makes Anki Overdrive great is “the seamless integration of play, making the experience fun and well-rounded.” The cars and the app is dependent on each other, creating a dynamic experience that never gets old. But the toy is every bit the equal (if not better than) the app.

“The play value has to be inherent in the toy,” says Appell. “Bringing on an app or any kind of element to make the play more enriching, more fun, that’s great. But if the app is more engaging than the toy, then the toy becomes irrelevant.”

There’s another reason app-connected toys are gaining traction. In an increasingly digital world, it’s getting ever harder to give a physical present. These days, all kids want is iTunes gift cards and Spotify subscriptions. But parents and grandparents still want to give toys and share in experiences, says Appell. “Toy play is much more social,” she says, “something that can be shared.”

To that end, board games — which were absorbed by apps en masse in the early days of iPads — can still be great gifts. Beasts of Balance, an app-integrated stacking puzzler, embeds game pieces with computer chips to create unique and interactive on-screen experiences over the course of a game. Requiring players to manipulate the pieces, talk out loud, and use both social skills and spatial recognition, the game is so much more than its app.

But Beasts’ app adds incredible value to this otherwise simple game. Infusing molded plastic with storylines and magic, this game shows what’s possible when you pair toys and tech. The company that makes it, Sensible Object, may be on to something. Imagine playing old-school Dungeons & Dragons with cards packing this technology — and try not to jump when a Hydra roars on the screen.

I have no doubt that almost every hardcore D&D fan winced at reading the previous paragraph, because they’re proof that there is also a downside to tech’s pairing with play. While toys and games now have the ability to be more dynamic and engaging than ever before, toymakers are not only smothering imaginations, they’re also assuming that little ones all have their own tablets or smart devices. While the numbers show that they’re increasingly right, this idea still creates a barrier to entry, or in this case a, barrier to enjoyment. So it’s not time to pack away the Brio trains just yet. Besides, you need to have another toy at the ready when the iPad’s batteries run dry.

This story was originally published on TIME.