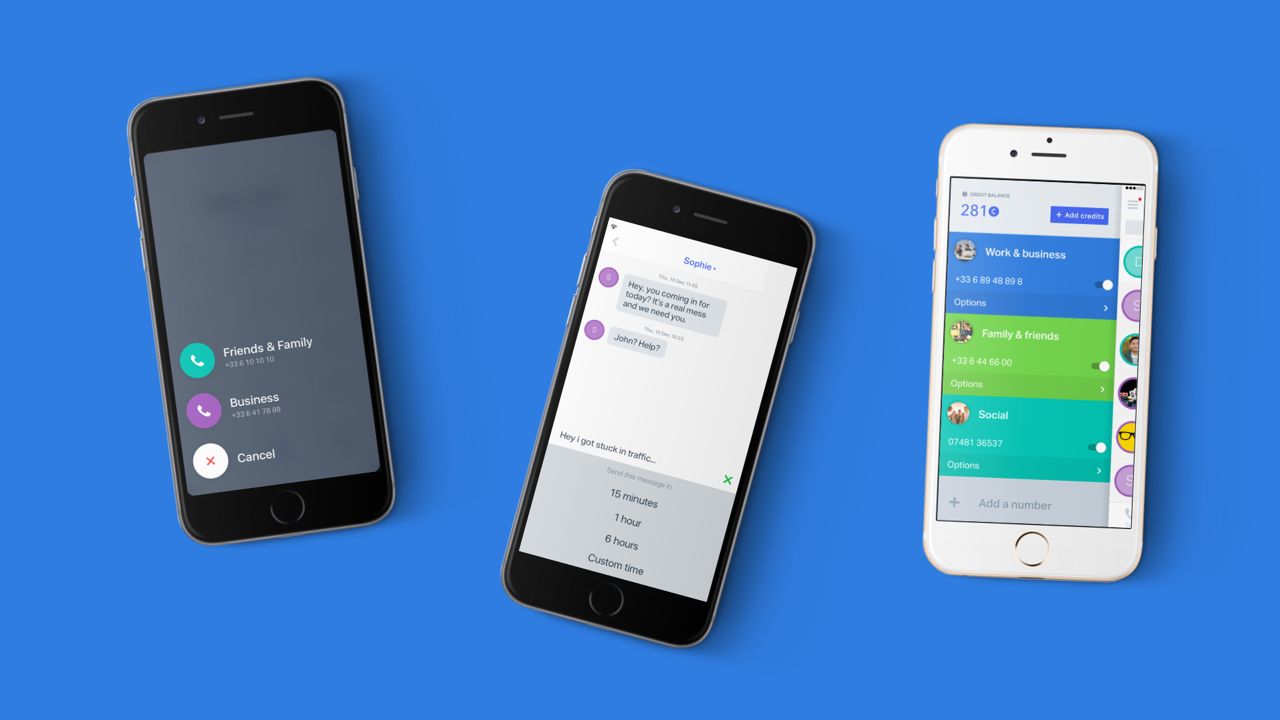 People who like to gab on the phone are about to have two new choices for managing all their calling and texting.

Wireless carrier T-Mobile is rolling out its Digits service next year to let customers have up to five devices connected to one phone number or up to five numbers on one device. And European app developer Taig Khris is bringing his popular “onoff” service to the United States starting on Wednesday, which in some ways offers even more flexible phone numbers.

Both services are cloud-oriented, letting users access voice mails, text messages, contacts, and other data from multiple devices or any web browser. Both also run over the actual voice and SMS phone networks, providing somewhat greater reliability than similar services that run over data networks with voice-over-IP technology.

There have long been services like Google Voice or AT&T’s (T) NumberSync allowing people some flexibility around phone numbers and devices. But the two newest players offer expanded capabilities across different devices, carrier networks, and even global borders.

Khris came to fame winning gold medals for inline skating at the X Games and once jumped off the Eiffel Tower in his skates. But he has been working on onoff for the past four years since an accident that broke both his legs sidelined his athletic careers, later getting him thinking about becoming a businessman. To build the service behind the app, Khris sought and obtained a telecom operating license, the key to offering numbers that behaved like normal phone numbers.

Onoff started service in France last year and expanded to the U.K. at the beginning of 2016, but the United States offers a potentially much larger customer base. In Europe, the app has been downloaded more than 1 million times and has over 250,000 active subscribers. The target audience for onoff is young and chatty, maybe the type who’d want a one-time number to give to someone they just met at a bar. Dismissing the big telecom operators of the world as stodgy and afraid to change, Khris tells Fortune that he aims to become “the Spotify for telecom.”

T-Mobile is going more mainstream. One pitch for Digits is a business that wants multiple employees to be able to answer calls on a single sales line, for example. Another scenario is keeping an old feature phone active in case of emergency.

Both Digits and onoff provide similar core functions by virtually breaking the link between a single SIM card in a phone and a phone number. Users can get extra phone numbers—maybe one for business, one for personal calls—and choose which to use on which device. The numbers work across devices running on just about any carrier. And when calls go out, the recipient sees the chosen number as the caller ID, just like with a regular phone number.

On some phones like the Samsung Galaxy S7, T-Mobile has built Digits functionality into the basic operating system. The regular dialing app offers a choice of a Digits user’s various numbers for calling out or texting. On other smartphones, Digits runs via an app, but T-Mobile is working on integrating with other phone makers. The onoff service works similarly but only from within its own app.

T-Mobile’s service is still in beta, and the company hasn’t said how much it will cost to use Digits. The onoff app is a free download but each phone number costs $3 per month to use.

There are some other key differences. Because T-Mobile’s service is built more deeply into its network, Digits can work on any device that runs off a SIM card. Have any old Motorola Razr phone in the closet? It can run Digits, as can any mobile-enabled tablet, smartwatch, or other connected device. The onoff app, by contrast, runs only on phones and tablets with Apple (AAPL) or Google’s operating systems.

“I just keep an old phone in my glove compartment and it works there,” Evan Feldman, T-Mobile’s product manager for Digits, tells Fortune. “There’s no software required—it just works.” For more modern devices, that also means Digits works beyond the iOS and Android ecosystems, such as on a Samsung watch that runs the simple Tizen operating system.

But because Khris is a small entrepreneur, the onoff service is also more free form. There’s no limit to the number of numbers a user can buy and add to the app. And the app lets users pick specific numbers from many different countries around the world. Have a bunch of friends in London? Grab a local number for them to call without overseas charges.

There’s also some friction between the two services. Khris says he had to delay his U.S. launch because T-Mobile dragged its feet in approving a link to onoff’s network, which is required for onoff to work as a standard voice and texting service. Other U.S. mobile companies had immediately validated onoff via Syniverse, an company that manages interconnections between telecom carriers, Khris says, but T-Mobile waited until after the launch of Digits. The timing seems “crazy weird” to Khris.

T-Mobile’s Digits team wasn’t previously familiar with onoff, Feldman says. The two services are similar but “not quite the same,” he says, because T-Mobile has access to its network at a deeper level than an outside app developer.

Of course, it may be that neither onoff or T-Mobile (TMUS) will win. With smartphone apps like Snapchat, Facebook’s (FB) Instagram, and WeChat, new modes of communication have exploded and phone numbers have never seemed less important. The services also don’t work with Apple’s popular iMessage service, which bypasses the traditional phone network.

But while use of basic texting has plummeted over the past decade, the number of voice minutes used per month has doubled, hitting 240 billion minutes a month in 2015, according to U.S. wireless industry statistics. So for those many people who still prefer their communications speaking person to person, the new options are boundless.