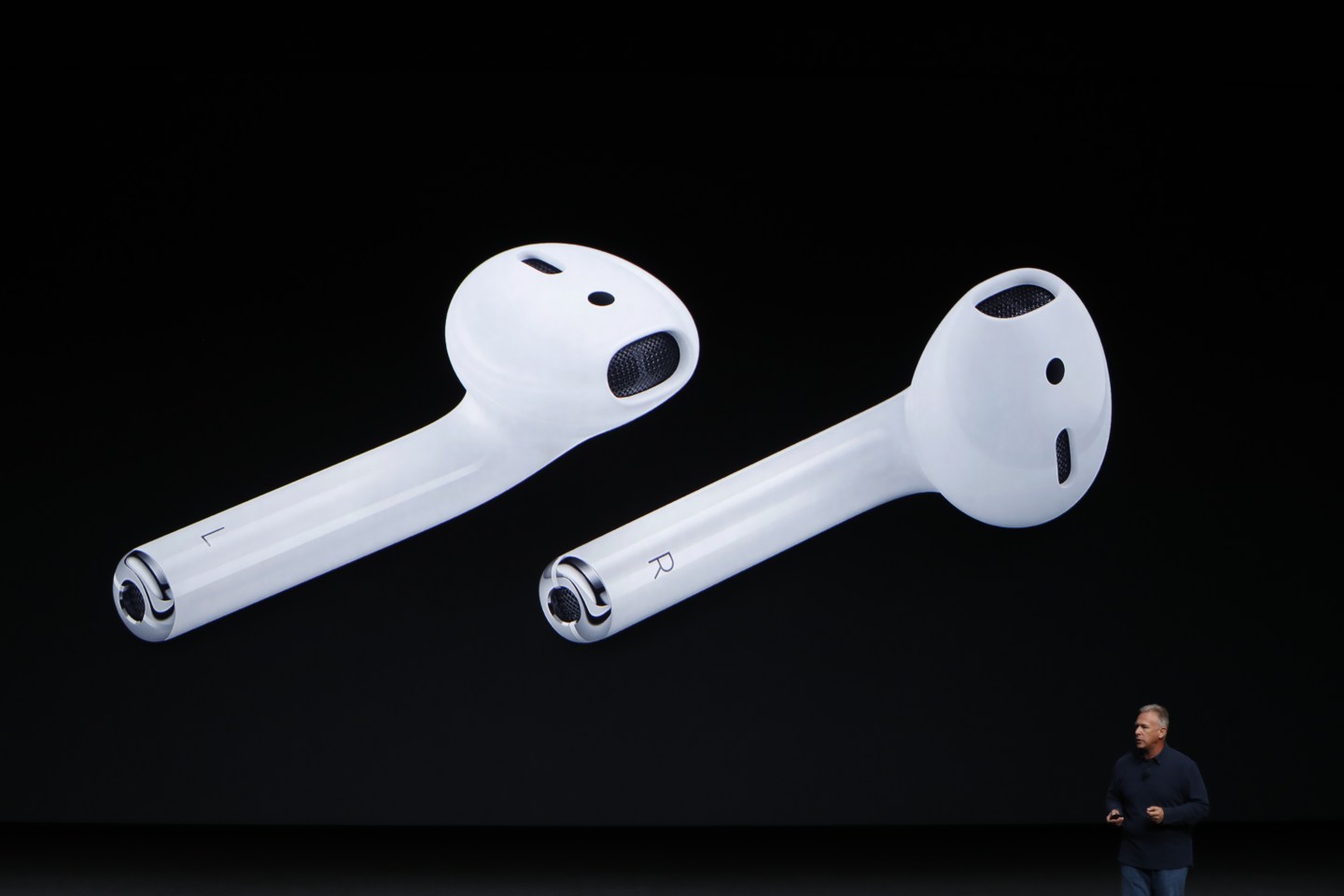 The good: Easy setup, comfortable, Automatically pauses music when you remove a bud
The bad: Expensive, Looks awkward when you’re wearing them, Limited playback controls
Who should buy: Apple fans willing to splurge on tangle-free earbuds

When Apple launched the iPhone 7 this year, one controversial move stood out: The Cupertino, Calif.’s flagship smartphone no longer features a headphone jack. Instead, users connect older headphones to the phone’s port via an adapter, use the included earbuds that connect the same way, or opt for wireless Bluetooth headphones.

Using Bluetooth headphones, however, can be a pain. Pairing them can be a nightmare, and signals sometimes drop in the middle of a call or a song. Apple’s attempt to fix those problems is now available in the form of AirPods, $159 wireless headphones that, thanks to the company’s unique technology, instantly pair with a nearby iPhone. AirPods also have sensors allowing them to automatically mute a song when one bud is removed, while two taps on the side activate Siri, Apple’s digital assistant.

After an uncharacteristic delay that lasted over a month, Apple’s AirPods went up for sale in early December. I’ve been using them for several days, and have found that they offer a reliable and consistent wireless experience, but little else that make them worth the price.

Here’s a closer look at what it’s like to use Apple’s AirPods:

The AirPods’ most compelling feature, as I wrote in September, is how simple they are to set up. As soon as I opened the case’s lid, a small window appeared on my iPhone’s home screen indicating that the earbuds had successfully paired with my phone. This pop-up also shows the remaining battery life in each bud, as well as in their case, which has an internal battery that extends the AirPods’ lifespan. The graphic appeared almost instantly whenever I flipped open the AirPod’s case while on the home screen, but I noticed some sluggishness when my iPhone was locked. Still, the near-instant pairing makes Apple’s AirPods stand out from the other Bluetooth earbuds on the market today.

Apple’s new headphones are just about as comfortable as its traditional wired buds, save for one important difference: they’re actually enjoyable to wear during a run. I usually hate wearing any type of earbud while exercising — no matter how tightly I insert them, they always feel loose and tend to pop out. This wasn’t the case with the AirPods, which I wore during a 40-minute run without having to adjust a single time. I also find them to be more comfortable for extended use than most in-ear headphones, which are meant to be worn deeper in the ear canal and block more external noise.

As with Apple’s traditional buds, the AirPods don’t include multiple tips in different sizes. That means buyers can’t adjust their fit to match their ear size and shape — so if Apple earbuds tend to be uncomfortable for you, the AirPods probably won’t work well either. If that’s a deal breaker, try checking out the Powerbeats3, which also include the Apple chip that allows for instantaneous connections. (Read our list of alternative wireless earbuds here.)

Comfort is important, of course, but when it comes to anything worn on your body, so are aesthetics. That’s where the AirPods fall short. The bottom portion of the AirPods stem out from the ear when being worn, resulting in an awkward look that you might find uncomfortable. If AirPods take off and become more common, of course, this weirdness factor may wear off.

Of course, sound is the most important quality for any audio equipment. Apple’s AirPods are sure to please casual listeners looking for a reliable pair of wireless earbuds. Unless you’re a hardcore audiophile, the rich, clear sound quality will be more than satisfactory. Through the AirPods, music sounded well-balanced, with just enough bass to add depth without feeling overwhelming.

Importantly, the sound never cut out, which is a problem reviewers have cited with other wireless headphones. This also held true whenever I answered a phone call wearing the AirPods, even if my iPhone was stored in a back pocket. This could be thanks to Apple’s W1 chip, the tech that also enables the lightning-fast pairing.

Still, the audio quality wasn’t much better than what Apple’s wired EarPods offer, which come included with the iPhone 7 and iPhone 7 Plus for no extra charge. In fact, the standard EarPods sounded a bit louder than the AirPods during my testing. I also noticed that the Apple’s wireless headphones produce some white noise when the microphones are activated, which can be distracting during a phone conversation.

Still, the audio was loud enough to efficiently drown out most of the noise on a crowded subway platform. These aren’t true noise-cancelling headphones, so look elsewhere if you’d like that kind of experience. But I didn’t find myself struggling to hear music in crowded spaces while wearing the AirPods.

A common knock against Apple’s wired EarPods is that they don’t last very long. After a few months of heavy use, one of the buds will sometimes stop working. Hopefully, more premium and costly earbuds like the AirPods shouldn’t have that issue, but I haven’t used them long enough to find out.

A big advantage the AirPods have over Apple’s standard wired buds is in their ability to detect when they’re in an ear, and when they’re taken out. This makes it possible to automatically pause music by removing a single bud, which can be handy when you need to quickly listen to what’s happening in your environment, whether it’s an unexpected announcement from your train conductor or a tourist asking for directions.

Two quick taps of either AirPod, meanwhile, will activate Siri, Apple’s digital aide. I found that two quick taps often worked best; if there’s a longer pause in between presses, Siri wouldn’t answer. You can ask Siri the same types of questions and issue similar commands as you would using EarPods, such as skipping a song, getting directions home, and asking it to play a specific playlist. Microphones on the AirPods help Siri hear your requests while your phone is tucked away. This double tap command can also be configured to play or pause music instead of summoning Siri, but unfortunately, you can’t have both.

The AirPods’ carrying case, which is about the same size as a pack of dental floss, charges the buds, meaning I didn’t have to worry about them running out of juice. After four full days of use, the case was down to 12%. I never listened to the AirPods for more than an hour at a time without returning them to their charging holster, so the headphones’ battery level was usually between 90 and 100% during my testing. Apple claims the AirPods should be able to offer five hours of playback before their battery depletes.

With the AirPods, Apple has created a pair of wireless headphones without significant compromises, provided you’re not obsessed with top-quality sound. Certain features, like the quick-pairing and removing a bud to pause audio, show that Apple focused on practical ways to improve the earbud experience.

But I wish the AirPods did more for the price. It’s asking a lot to pay $159 for headphones that offer a similar experience in terms of audio quality and Siri functionality as the EarPods that come with every new iPhone. (Apple will charge you another $69 for a replacement AirPod if you happen to lose one.) Yes, $159 is cheaper than most wireless earbuds, like Samsung’s Gear Icon X ($199.99), and the Bragi Dash ($299). But both of those devices offer more functionality, like fitness tracking, more playback controls, and internal storage for playing music when your phone isn’t nearby. While I enjoyed using the AirPods, I would have loved them if I could tap them to skip a track or adjust the volume. That small addition would make the AirPods just about perfect, especially for the price.