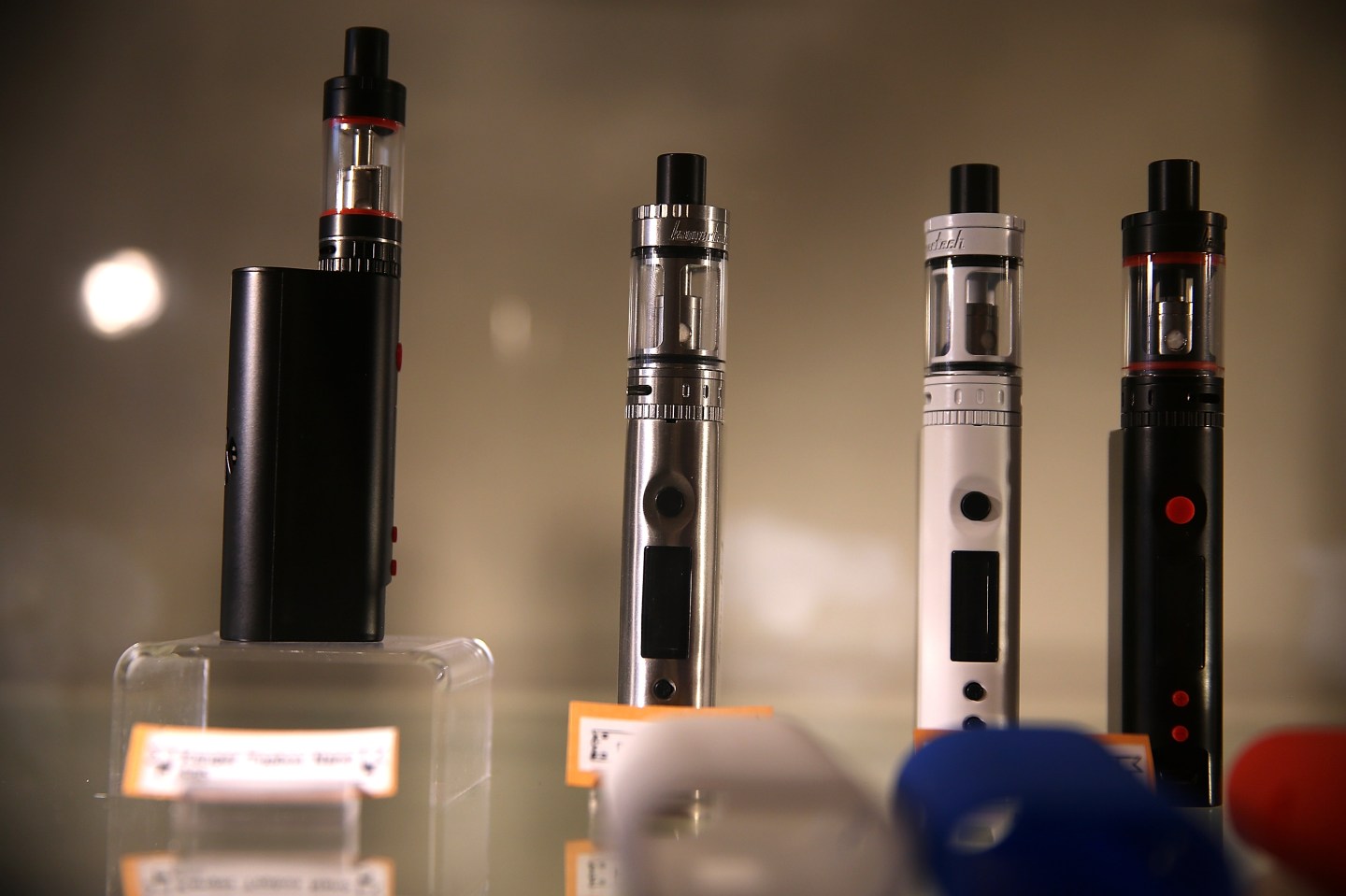 E-cigarettes are displayed at Gone With the Smoke Vapor Lounge on May 5, 2016 in San Francisco, California. The U.S. Food and Drug Administration announced new federal regulations on electronic cigarettes that will be the same as traditional tobacco cigarettes and chewing tobacco. (Photo by Justin Sullivan/Getty Images)
Justin Sullivan—Getty Images

The U.S. surgeon general on Thursday called for action to reduce the use of e-cigarettes among young people, noting they have overtaken cigarettes to become the most commonly used tobacco products among this group.

The nation’s top doctor, Vivek Murthy, weighing in on the subject for the first time since e-cigarette use took off, said young people are more vulnerable to the negative consequences of nicotine exposure than adults.

“These effects include addiction, priming for use of other addictive substances, reduced impulse control, deficits in attention and cognition, and mood disorders,” he said in a preface to the report.

The report recommends that e-cigarettes be incorporated into existing smoke-free policies, including preventing youth from accessing e-cigarettes, implementing price and tax policies that discourage use and encouraging federal regulation of e-cigarette marketing.

“We know a great deal about what works to effectively prevent tobacco use among young people,” the report says. “Now we must apply these strategies to e-cigarettes.”

The report is likely to infuriate those who argue that e-cigarettes are considerably less dangerous than cigarettes and that a refusal to recognize that removes an opportunity to help reduce the burden of death and disease from smoking.

Between 2011 and 2015, use of e-cigarettes among U.S. middle school students rose to 5.3 percent from 0.6 percent, according to the Centers for Disease Control and Prevention.

But as use of e-cigarettes has risen, traditional smoking has gone down. Between 2011 and 2015 the use of combustible cigarettes among U.S. middle school students fell to 2.3 percent from 4.3 percent.

There is no proof that the drop in cigarette smoking was caused by increased e-cigarette use. Neither is there conclusive data to support claims that e-cigarettes are a gateway to the use of regular cigarettes.

“More studies are needed to elucidate the nature of any true causal relationship between e-cigarette and combustible tobacco product use,” the report said.

Even so, because research related to e-cigarettes is so new, the report says, a “precautionary principle” should be employed to help prevent e-cigarette use among young people.

“This principle supports intervention to avoid possible health risks when the potential risks remain uncertain and have been, as yet, partially defined.”

The report comes as the overall smoking rate in the United States fell in 2015 to a record low of 15 percent. Public health experts fear those gains could be lost if young people become addicted to nicotine via e-cigarettes and progress to using more damaging conventional cigarettes.

Reynolds American, Altria Group, and Fontem Ventures, a subsidiary of Imperial Brands Plc, are among the leading manufacturers of the devices. Their use has grown quickly in the past decade, with U.S. sales expected to reach $4.1 billion in 2016, according to Wells Fargo Securities.

However, use of vapor devices in general–including tanks and other vaping systems – has stalled in the United States as more Americans question their safety, according to an online Reuters/Ipsos poll released in May.

On Tuesday, Marlboro maker Philip Morris International filed the first U.S. application to market an electronic tobacco product with a claim that it is less harmful than cigarettes. The device, called IQOS, contains real tobacco which is heated but not burned.

The heat produces a vapor which the company says contains less than 10 percent of the harmful chemicals contained in the smoke produced when cigarettes are burned. The company already sells IQOS in dozens of countries, including Japan, Switzerland and Italy. (Editing by Matthew Lewis)