Donald Trump Doubles Down With China Attacks After Taiwan Call 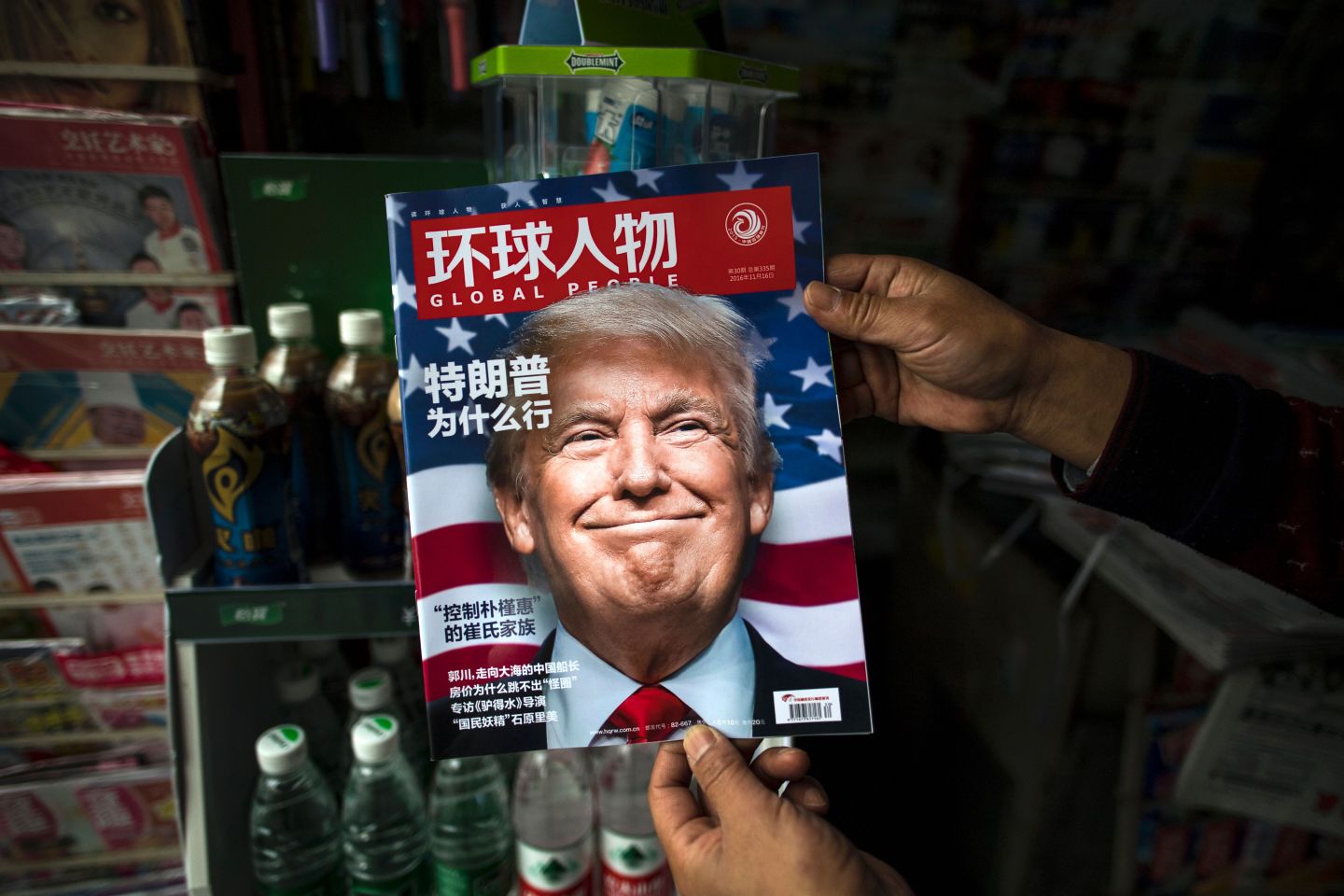 TOPSHOT - A copy of the local Chinese magazine Global People with a cover story that translates to "Why did Trump win" is seen with a front cover portrait of US president-elect Donald Trump at a news stand in Shanghai on November 14, 2016. Chinese President Xi Jinping and US president-elect Donald Trump agreed November 14 to meet "at an early date" to discuss the relationship between their two powers, Chinese state broadcaster CCTV said. / AFP / JOHANNES EISELE (Photo credit should read JOHANNES EISELE/AFP/Getty Images)
Johannes Eisele — AFP/Getty Images

Donald Trump attacked China over the weekend on Twitter on everything from its currency, the South China Sea, to tariffs. Many experts in turn criticized the president-elect’s moves.

The tweets followed the reporting of a call between Trump and Taiwanese president Tsai Ing-wen on Friday.

The call broke nearly four decades of diplomatic protocol between the U.S. and China of no direct communication between a U.S. president and Taiwanese leaders following the U.S.’s move in 1979 to recognize Beijing as the sole government of China. The diplomatic response was largely negative.

Evan Medeiros, the Asia director at the White House National Security Council, told the Financial Times: “The Chinese leadership will see this as a highly provocative action, of historic proportions. Regardless if it was deliberate or accidental, this phone call will fundamentally change China’s perceptions of Trump’s strategic intentions for the negative.”

“Unfortunately, President-elect Trump has waded into the thicket of U.S.-Taiwan relations without any apparent briefings by senior State Department officials intimately familiar with this long history,” wrote Jeffrey Bader, a three-decade diplomat who last served at the National Security Council. “The Chinese, unfortunately, are likely to see this as threatening a cornerstone of the edifice on which U.S.-China relations are built.”

The President of Taiwan CALLED ME today to wish me congratulations on winning the Presidency. Thank you!

Interesting how the U.S. sells Taiwan billions of dollars of military equipment but I should not accept a congratulatory call.

With criticism of the call continuing through the weekend, Trump went back to tweeting on Sunday.

“Did China ask us if it was OK to devalue their currency (making it hard for our companies to compete), heavily tax our products going into their country (the U.S. doesn’t tax them) or to build a massive military complex in the middle of the South China Sea?” Trump said on Sunday. “I don’t think so!”

The Sunday tweeting attracted more criticism. For one, it’s been clear lately that China has been furiously trying to support the yuan from further decline which could lead to further capital outflows out of the country, weakening its already vulnerable economy.

“China is propping its currency up, NOT devaluing it,” wrote Paul Haenle, a former National Security Council director for China, Taiwan, and Mongolian Affairs. “[Trump] needs to take his intel briefings & start learning [from] professionals at Treasury Dpt.”

Trump’s weekend tweeting made clear of that.

Now China and the world are left guessing what he may do next.