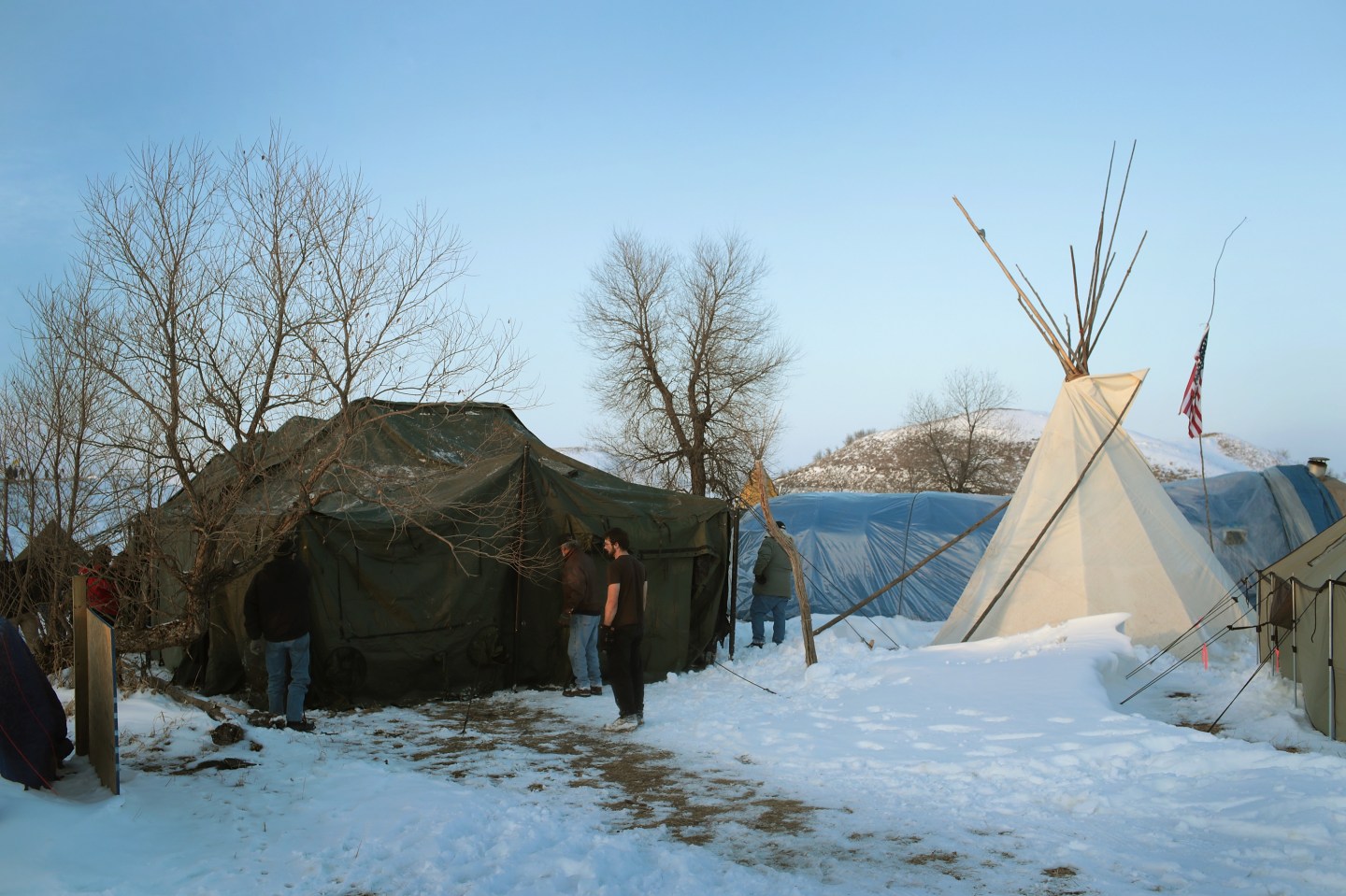 CANNON BALL, ND - DECEMBER 03: Military veterans build a tent at Oceti Sakowin Camp on the edge of the Standing Rock Sioux Reservation on December 3, 2016 outside Cannon Ball, North Dakota. As many as 2,000 veterans are expected at the camp this weekend to participate in non-violent protests against the construction of the Dakota Access Pipeline. Native Americans and activists from around the country have been gathering at the camp for several months trying to halt the construction of the pipeline. The proposed 1,172-mile-long pipeline would transport oil from the North Dakota Bakken region through South Dakota, Iowa and into Illinois. (Photo by Scott Olson/Getty Images)
Scott Olson Getty Images

In the back reaches of the Dakota Access Pipeline protest camp, U.S. military veterans, armed with saws, hammers and other tools, are quietly building barracks, an infirmary and a mess hall.

Despite the bitter cold and an evacuation order from the U.S. Army Corps of Engineers, the veterans hope to erect enough space to house at least several hundred peers making their way into the Oceti Sakowin Camp here in Cannon Ball.

Veterans interviewed by Reuters gave a plethora of motives for traveling here. Some felt it was their patriotic duty to defend protesters, especially since Native Americans have historically had an active presence in the U.S. military.

For others, coming here offers a sense of purpose they have lacked since returning to civilian society. For all, the camaraderie with those who have also shared military service was important.

“Our commitment has not expired because we took off the uniform,” said Charles Vondal, 51, an Army veteran and Native American from Turtle Mountain, N.D. “We understand what it means to put our lives on the line.”

The response last month to a call for 2,000 veterans to act as a barrier between activists and law enforcement was much swifter than expected – with organizers having to stop accepting volunteers.

The veterans arriving say their presence will make it less likely that police will resort again to aggressive tactics, after water cannons and tear gas were used on a group of protesters in sub-freezing temperatures two weeks ago.

More than 500 activists have been arrested over the last several months.

“I felt it was our duty to come and stand in front of the guns and the mace and the water and the threat that they pose to these people,” said Anthony Murtha, 29, from Detroit, who served in the U.S. Navy from 2009 to 2013.

Local law enforcement said the specter of having thousands of military-trained veterans in the area was of concern, but they were not expecting any melees.

Hundreds of United States Armories Are Contaminated With Lead

“If (veterans) come to this area and they want to protest peacefully, if that’s what they want to do and have their voice heard, then there’s absolutely no issues with that,” Kyle Kirchmeier, sheriff for Morton County, North Dakota, where the pipeline is routed, said in an interview Saturday.

Some veterans groups are unhappy with those coming to support the protesters, saying they are standing up for illegal behavior. They also note that many law enforcement officers are veterans. North Dakota’s state veterans coordinating council, in a letter last week, asked the veterans who want to stand with the protesters not to come.

But veterans at the camp say pictures and video of water hoses used against Native Americans spoke to their concern of heavy-handed tactics used by law enforcement.

The U.S. Army Corps of Engineers has yet to grant a permit for Energy Transfer Partners to drill under Lake Oahe, a reservoir that is part of the Missouri River.

For more on veterans, watch:

This one-mile stretch represents the last unfinished portion of the line in North Dakota, which will stretch as far as Illinois.

“It’s symbolic for people who stood up for this nation’s freedom to stand up for the first inhabitants of this nation,” said Dave Archambault II, chairman of the Standing Rock Sioux, on Saturday.

Veterans Stand With Standing Rock, which organized this weekend’s rally and other events, has warned veterans they could experience flashbacks to combat experience.

“We’re under constant surveillance with helicopters and planes flying over. There is a military boundary with barbed wire,” said Angie Spencer, 34, a clinical psychologist from Seattle who has worked with veterans.

The surroundings, she said, mean counselors are vigilant for signs of post-traumatic stress disorder.

On Friday, the rally organizers met with law enforcement on the Backwater Bridge, the site of two of the most heated confrontations between police and protesters in the last several weeks. They said they were there to protest peacefully.

The chances that the pipeline will be stopped at this point seem slim. President-elect Donald Trump last week voiced support for the project, which has been delayed twice since September by the U.S. Army Corps of Engineers.

Opposing the pipeline, standing with the Standing Rock Sioux tribe, was an opportunity to again find a personal mission, some said.

“You kind of lose your purpose when you’re out (of the military),” said John Nelson, 25, from San Diego, who spent seven years in the Navy. “I think that’s why it’s so easy for so many veterans to jump on board.”