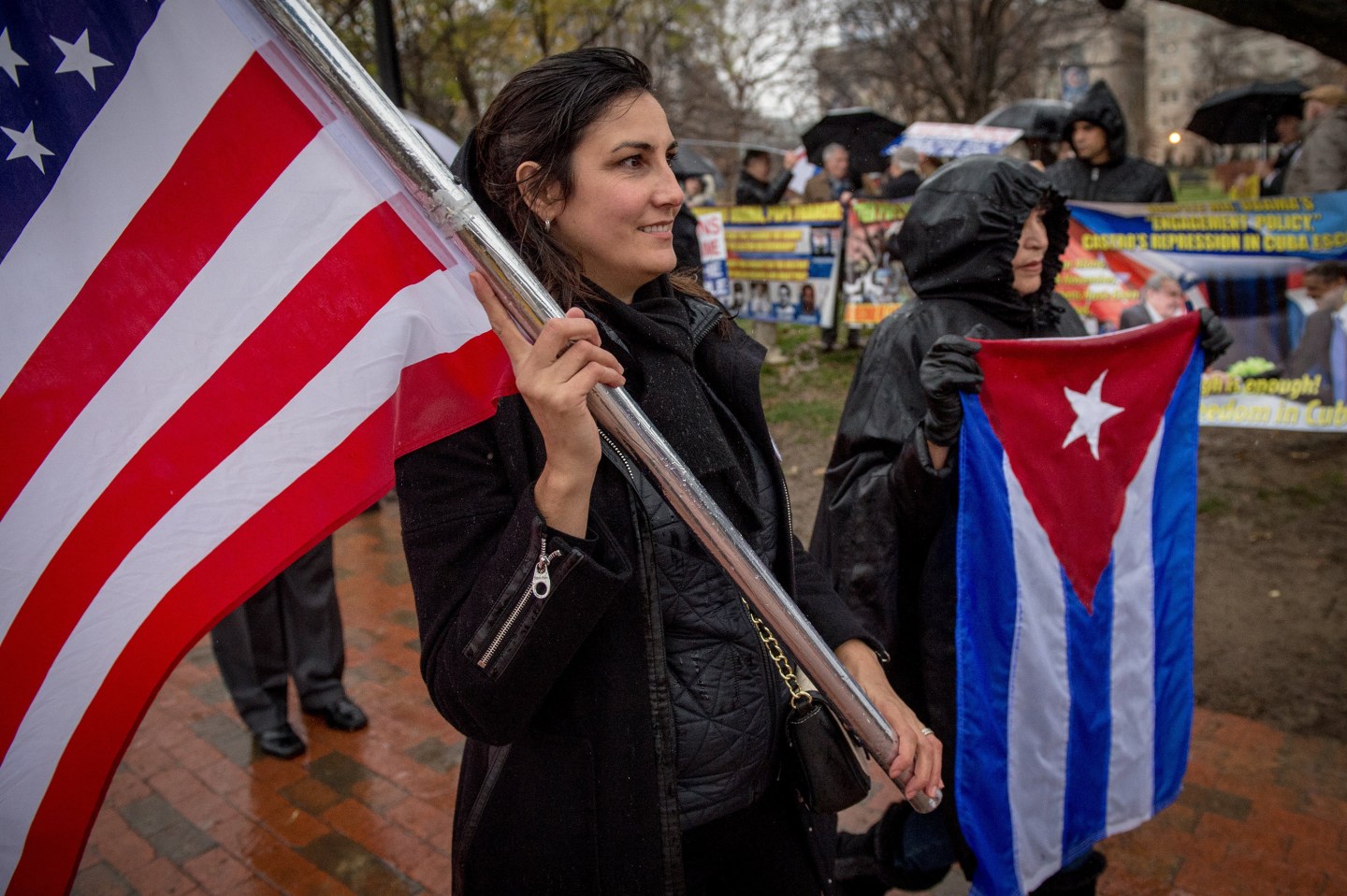 Ley Salcedo, of New York, carries an American flag next to other supporters from New Jersey, Florida and Illinois who are carrying Cuban flags, banners and signs in front of the White House hoping to raise awareness of continued oppression and human rights abuses by the Castro regime during a rally in Washington, D.C., on Thursday, Dec. 17, 2015. (Ken Cedeno/McClatchy DC/TNS via Getty Images)
McClatchy DC TNS via Getty Images

Cuban-Americans carry hefty political clout in the United States—they vote more frequently than any other Latinos; they have a strong presence in Washington with three senators, two of whom were serious contenders for the presidency; and only one non-Cuban has been Miami’s mayor since 1985.

Much of this is a legacy of Fidel Castro, the longtime Cuban leader who died Nov. 25. His communist revolution in 1959 not only sent thousands of Cubans to the U.S. but engendered in them a fervor to resist communism at the height of the Cold War—an issue that resonated heavily in their adopted country and helped transform them into a potent force in its politics.

The clout Cuban-Americans now enjoy comes as no surprise to Lorenzo Rodriguez, a 41-year-old Miami real estate agent who grew up, like many people of Cuban heritage, in households where politics are a passion and people are eager to participate in a democracy after fleeing the communist island.

“Because America gave us this platform, I think Cubans utilized it,” he said days after Castro died at age 90. “The fact that America took them in is a debt they feel they can never repay.”

Cubans have been coming to America for about 200 years. Census figures show that the year before Castro took power in 1959, about 125,000 lived in the U.S. In the waves of migration since the communist revolution, that number is now about 2 million, government estimates show.

That’s about 3.7% of the total Hispanic population in the U.S., according to the Pew Research Center. Two-thirds of Cuban-Americans live in Florida, with most concentrated in the three major South Florida counties, giving them a powerful political base, said Dario Moreno, a Florida International University political science professor who specializes in Cuban politics.

Florida’s role as a perennial swing state in presidential elections gives Cuban-Americans an outsize role in those campaigns, Moreno added. In addition, more than two-thirds of Cuban-Americans regularly turn out to vote, compared with about half of the nation’s Latinos as a whole.

“They are paid a lot of attention because of their concentration,” Moreno said. “They turn out for the presidential election, and they also turn out for local elections. That’s how you get so many Cuban politicians. Cuban-Americans are very politically attuned and savvy.”

For more on Cuba, watch:

Cuban-Americans also have been able to win immigration rights enjoyed by no other nationality, a reflection of the struggle between Havana and Washington that dates to the Cold War. Any Cuban who reaches U.S. soil is likely to be allowed to stay, while those intercepted at sea are generally sent back under the “wet foot, dry foot” policy.

Yet it’s not just about voter turnout and geographic concentration. Unlike most other Hispanic immigrant groups, Cubans came to this country in large measure to escape oppression or persecution rather than for economic reasons.

For many, family members were killed or jailed, the Castro government took their property and possessions, or they made the risky Florida Straits crossing in flimsy watercraft. Many have relatives still in Cuba.

Such stories are staples of Cuban-American dinner conversations and family gatherings, reminders to the younger generation of what exile parents and grandparents endured, Rodriguez said.

“You look at your children today, it’s important for them to value that struggle,” he said. “We try to pass it down as much as possible to never let it go.”

Those hardships, triggered by a political revolution led by Castro, have given Cuban-Americans perhaps a greater appreciation of the role of politics. Instead of an abstraction, politics for them is all too real — and many Cuban-American elected officials say they represent people still on the island almost as much as their constituents in this country.

“I’m also here in representation of my grandfather, who was in political prison for 12 years and was tortured,” said U.S. Rep. Carlos Curbelo, a Republican who represents a chunk of South Florida stretching to Key West. “We are in many ways representing people who cannot be here.”

That sentiment was echoed by former U.S. Sen. Mel Martinez, who came to Florida from Cuba alone as a teenager along with 14,000 other unaccompanied children under the Operation Pedro Pan program from 1960 to 1962. Martinez, who was U.S. Housing and Urban Development secretary under President George W. Bush, didn’t see his family until 1966 — which he credits as forcing him to become independent.

“It’s the story of so many other Cuban families and the trauma that we went through,” Martinez said in a speech promoting his book about the experience.

It’s not hard to understand why politics is personal to most Cuban-Americans and why they turned out by the thousands in Miami’s Little Havana for a spontaneous celebration when Castro’s death was announced.

“That’s why it is such a loud, boisterous community down here,” Rodriguez said. “It just hits such a raw nerve for so many.”