U.S. Veterans to Meet with Tribe Elders in Pipeline Protest 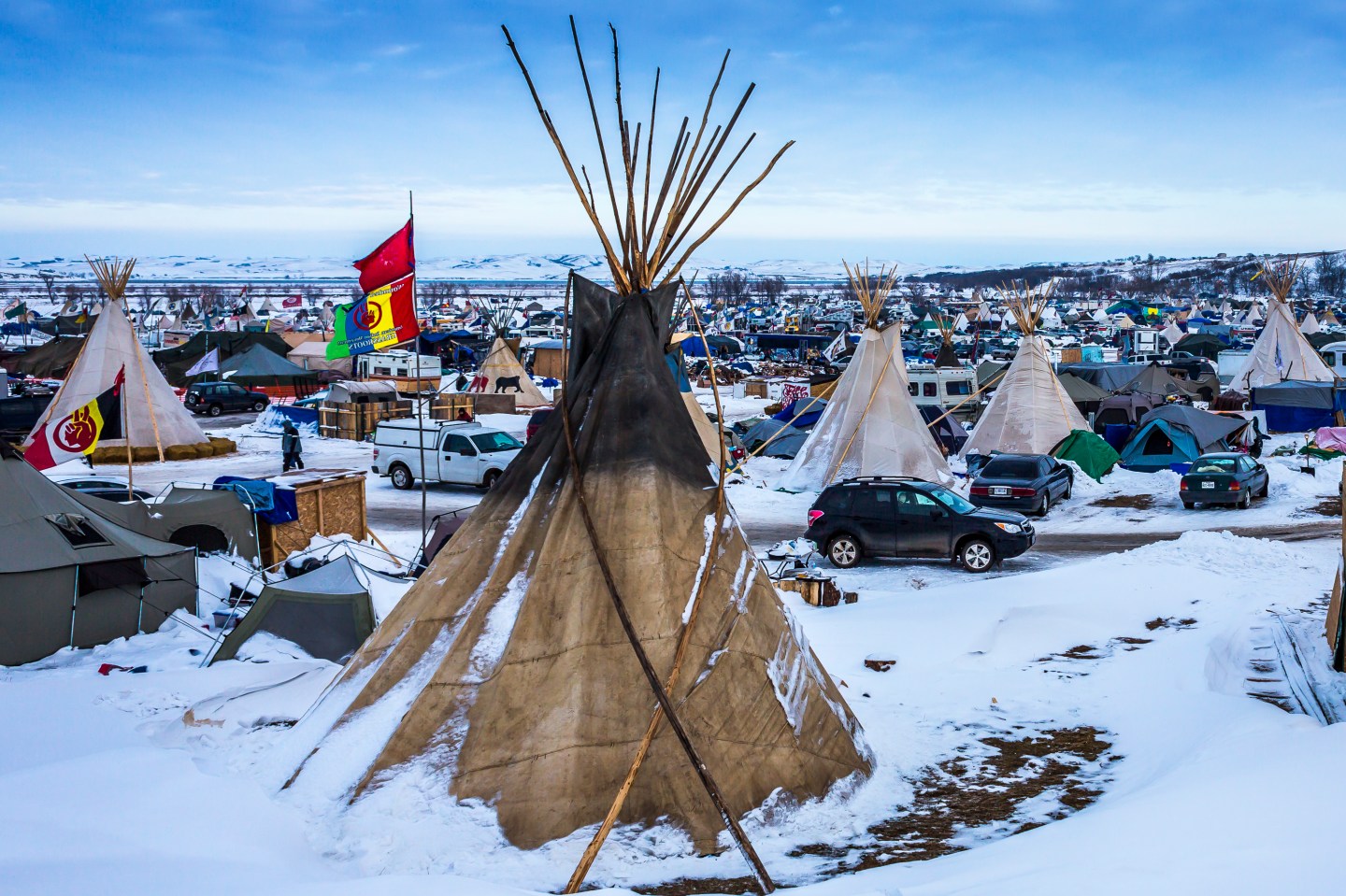 OCETI SAKOWIN CAMP, CANNONBALL, NORTH DAKOTA, UNITED STATES - 2016/12/02: An estimated ten thousand water protectors, both indigenous and non-native allies, are now occupying The Oceti Sakowin Camp in Cannonball, North Dakota. The fight to stop the 3.8 billion dollar Dakota Access Pipeline, which will pump half-a-million barrels of crude a day beneath the Missouri river if completed, has been going on for months. (Photo by Michael Nigro/Pacific Press/LightRocket via Getty Images)
Photograph by Pacific Press—LightRocket via Getty Images

U.S. military veterans will meet with tribal leaders on Saturday as they continue to entrench themselves in a North Dakota camp where thousands of activists are protesting a multibillion-dollar pipeline project near a Native American reservation.

Veterans Stand for Standing Rock members will meet with Standing Rock Sioux elders to determine how the potentially 3,500 veterans arriving over the weekend can aide protesters who have spent months demonstrating against plans to route the Dakota Access Pipeline beneath a lake near the tribe’s reservation.

The group of veterans are also expected over the weekend to complete building a barracks and mess hall near where they constructed a headquarters at the Oceti Sakowin camp about 5 miles (8 km) north of the small town of Cannon Ball.

Wesley Clark Jr, a writer whose father is retired U.S. Army General Wesley Clark, met with law enforcement on Friday to tell them that 3,500 veterans may join the protest and the demonstrations would be carried out peacefully, protest leaders said.

Tribal leaders asked the veterans, who aim to form a wall in front of police to protect the protesters, to avoid confrontation with authorities and not get arrested.

There have been violent confrontations near the route of the pipeline with state and local law enforcement, who used tear gas, rubber bullets and water hoses on the protesters, even in freezing weather.

“I felt it was our duty and very personally more of a call of duty than I ever felt in the service to come and stand in front of the guns and the mace and the water and the threat that they pose to these people,” said Anthony Murtha, 29, a Navy veteran from Detroit, at the Oceti Sakowin camp.

Some 564 people have been arrested, the Morton County Sheriff’s Department said.

The number of protesters in recent weeks has topped 1,000. State officials on Monday ordered them to leave the snowy camp, which is on U.S. Army Corps of Engineers land, citing harsh weather, but on Wednesday they said they would not enforce the order.

Morton County Sheriff Kyle Kirchmeier spoke by phone on Friday with U.S. Attorney General Loretta Lynch, but assistance for law enforcement and a timeline for a resolution to the situation were not offered, the sheriff’s office said.

Lynch said in a statement that the U.S. Department of Justice has been in communication with all sides in an effort to reduce tensions and foster dialog.

The 1,172-mile (1,885-km) pipeline project, owned by Texas-based Energy Transfer Partners LP, is mostly complete, except for a segment planned to run under Lake Oahe, a reservoir formed by a dam on the Missouri River.

Protesters, who refer to themselves as “water protectors,” have been gearing up for the winter while they await the Army Corps decision on whether to allow Energy Transfer to tunnel under the river. The Army Corps has twice delayed that decision.