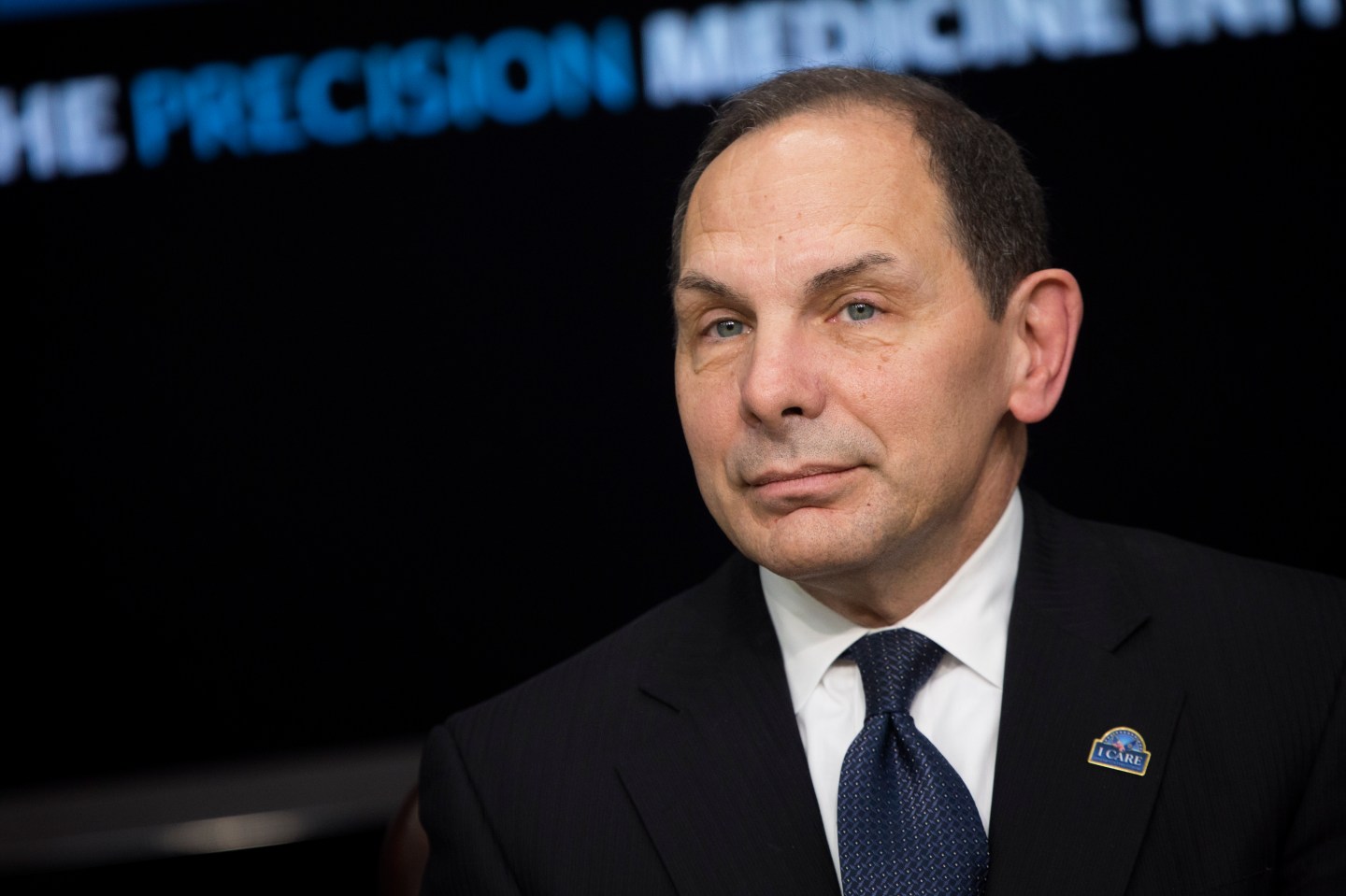 Bob McDonald, the Secretary of Veterans Affairs, is a rare breed in the Obama administration: An official who brought top-level corporate executive experience to the job. As the former Procter & Gamble CEO makes way for a president who’s only ever worked in business, Fortune sat down with McDonald to discuss the promise and pitfalls of a private-sector approach. Obama recruited McDonald in July 2014 after the eruption of a scandal over the wait times veterans faced for medical care shook the department to its core. McDonald has overseen a turnaround evident in dramatically improved consumer-satisfaction marks — proof, he says, that the federal government’s second largest bureaucracy can and should be run like a business. Yet after a fact-finding mission that launched his tenure, McDonald also believes wholesale privatization of the VA would spell disaster for veterans and the American medical system broadly. McDonald sat down with Fortune to discuss the progress he’s made and the work that remains. A transcript condensed and lightly edited for clarity follows:

We typically think about people coming from business to occupy positions in the administration that have a particular oversight or much more direct daily interaction with the business community itself. But not in this case.

The unique thing here is that President Obama decided this was a department whose purpose was serving customers. Those customers happen to be veterans. So when it came time to find someone, my understanding is they looked for the intersection between having run a large company, a business person, and someone who was a veteran.

Why do you think the department deserves to be run as a business?

Well, it’s an organization that serves 21 million veterans, 9 million roughly get some kind of benefit or connection, 6-plus million get their health care, and if you took our budget as it if were revenue, we would be Fortune 9. And Fortune 9 in revenue, but if you look at number of employees, 360,000 employees, that’s more than everybody on the Fortune 9 list with the exception of Wal-Mart. So what we’ve been doing is treating it like a business and training people in how to provide better customer service. Our vision is to be the best customer service organization in the federal government. And we’re making progress. We have put in place measures of effectiveness, ease, and emotion that lead to trust, and our trust number has gone from 47%, was the first measure, to the current measure is about 60%.

You started doing those measurements?

Yes. It’s the first benchmark we have that matters. The one I’m most proud of, frankly — I’m proud of the trust — but the one I’m really proud of is ease. That’s gone up 20 index points. Now why am I proud of that? Because it used to be to sign up for VA care, you needed to sign a bunch of papers and you needed what the government calls a “wet signature.” And now you can sign up for VA care using the Internet or a phone. It takes like 20 seconds.

What we’ve done is open up access. We’ve done that by opening up 4 million new square feet of space, by hiring over 1,200 new doctors, hiring over 2,300 new nurses. So it’s just like running a business, right? You take actions, you get results.

How do you square that with the conclusion you came to after the fact-finding tour when you came in, looking at what it would mean to privatize and deciding it would be disastrous not just for the department but for the entire American medical system?

When I came in as a businessperson, I had a couple of Senators say to me, “Why don’t we just privatize the VA and give out vouchers?” So I did an analysis.

Were you agnostic on it at that point?

Well, I was uneducated, so I guess I was agnostic. And what I discovered was not only do veterans need the VA, but American medicine needs the VA and the American public needs the VA. Think of the VA for American medicine the way you think of what the space program did for technology in this country. And here’s what I mean: There’s a three-legged stool. Leg one is R&D. We spend $1.8 billion a year on R&D. VA invented the first implantable cardiac pacemaker; VA created the concept of taking an aspirin a day to ward off heart disease; VA did the first electronic medical record; VA did the first moveable prosthetic device based on implanting a chip in your brain.

The second big area is training. We train 70% of the doctors in the country. We are the largest employer of nurses in the country, so we obviously have a big training role there. And the third leg of the stool is clinical work with veterans.

Where were you struck that a private sector approach didn’t work?

Government and private sector are different for many reasons. I have an axiom I use when I train leadership, and I say, “Organizations are perfectly designed to get the results they get.” There are a lot of things in government that limit the ability of the leader in, for example, making personnel calls. I can’t just reach into the organization and promote somebody to a position. They have to go through a board of peers. And the reason for that is rather obvious: The civil service code is designed to not foster patronage.

Is there some measure of civil service reform you think would make it easier to run this department and others more efficiently?

You told our magazine in 2013, reviewing your tenure as P&G CEO up to that point, “As I look back, I wish I’d had the benefit of hindsight and done the things we’ve done recently earlier.” What did you learn from your time at P&G that informed you here?

The quote’s still applicable. If you talk to any CEO or any Secretary, they’ll tell you, anything you try to do takes longer than you expected it to, and you wish you would have done it sooner. I’ll give you an example. At the VA, 14 of my 17 top leaders are new since I’ve been here. So, in two and a half years, we’ve been able to change 14 of our 17 top leaders. So you’d have a hard time convincing me that in government you can’t make these kinds of changes.

[That quote] was about was a recognition that times had changed for the Procter & Gamble company. Before 2008, when the economy was growing 3, 4, 5%, many of the businesses we bought, even though they were slow-growth brands, the growth of the company hid some of the slow-growth brands. And so in maybe 2014 I announced a $10 billion restructuring program some of which was divesting slow-growth businesses. And the company has continued that with most recently selling the cosmetic business and selling some of the other businesses. With the advantage of hindsight, we probably would have gone further, faster. But I don’t think anybody expected the economic decline we had in 2008 and how long that stuck with us. We’ve not had a quarter in this country of over 3% economic growth since 2008, since the crisis.

How do you apply that to this job?

To what extent do you think your experience here has been a writ small version of what the Obama administration experienced, inheriting a crisis and making measurable progress but not fast enough that people have felt it?

You talk about “against leadership” and it’s hard not to think about the presidential campaign, in which the winner bashed this department, a man who dodged military service himself, disparaged the service of one of our most honored veterans, Sen. McCain, and engaged in a flamewar with a Gold Star family. And yet exit polls show he carried veterans, 60-34; Romney won them by 20 points, McCain won them by 10. What do you make of that?

My point of view is very simple, which is veterans have served this country. They deserve to have the very best service. And everything I’m going to do and everything I want this organization to do is to look at every issue from the lens of the veteran rather than the lens of the bureaucracy. And I think the numbers are suggesting we’re starting to do that, but we still have a ways to go, and I’d be the first one to say that we still have a ways to go. So I’m hopeful that whoever the next Secretary is, that they will keep this progress going.

You’ve been critical of the “charismatic model of leadership,” which the president-elect seems to embody more than most people we’ve seen on the scene in a long time. Does that give you any pause?

I still believe in the model of leadership I learned at West Point, which is about values, which is about choosing the harder right rather than the easier wrong, about homogeneity of character, about a leader’s character is their identity. Those are the things we learned at West Point, they’ve served our nation well since 1802, and I don’t think I’m ever going to change my point of view on that.

How’s the transition going? How confident are you in the team that’s coming in?

From our standpoint, it’s going very well. President Obama has been very clear: He wants to have the best transition ever done. The transition team leader is a fellow named Mike Meese, a West Point graduate. So we all speak the same language.

I’m hoping that the transition team will see what’s gone right here and continue it but also be quick to point out what they think we need to do differently. And we’ll tell them where we’ve not delivered on something we aspired to deliver and try to build that into the plans.

There’s growing alarm among veterans service organizations about plans that the incoming administration has for the department and their interest in possibly privatizing critical functions in whole or in part.

You’ve been a victim of your own success insofar as more people are choosing to get more of their care at the VA. Is the answer to that simply a bigger budget?
President Obama in his first year in office got the biggest budget increase in the history of the VA. And over his seven-plus years, the budget’s gone up by 86%, so that’s quite a large increase. But the average veteran [enrolled in VA health care] uses the VA for 34% of their care, only 34%. And if that 34% becomes 35%, we need a $1.4 billion increase in budget. As you improve the quality of the care, more and more people come, in part because the reimbursement rates for the VA are no copay. What we’re seeing is more appointments per veteran and also more veterans coming into the system.

Is that why wait times have gone up?

What are you doing next?

I’m too purposeful to be totally retired. My purpose is to improve the lives of others. The new Secretary has not been announced yet. I’m open to all options. And we’ll see.

Does that include staying on?

I’ve not been asked. I’d have to be asked first and then I’d have to discuss it with my family. But I want to continue to make a difference wherever I can.

What background should the next Secretary have?

Running an organization with 360,000 people where health outcomes is the determinant, you would sure think that anybody who would be chosen or would be in the running would be somebody with experience running a large organization. IN a consumer-based organization. The President pretty much had it right. I think it’s important to have a veteran, because you’ve got to have credibility with your customer base. And then secondly somebody who has experience running a large organization that has served others. What we brought here is the training of human-centered design, the training of Lean Six Sigma, strategic focus, the creation of a vision. Those are things you learn over a period of time running large organizations.