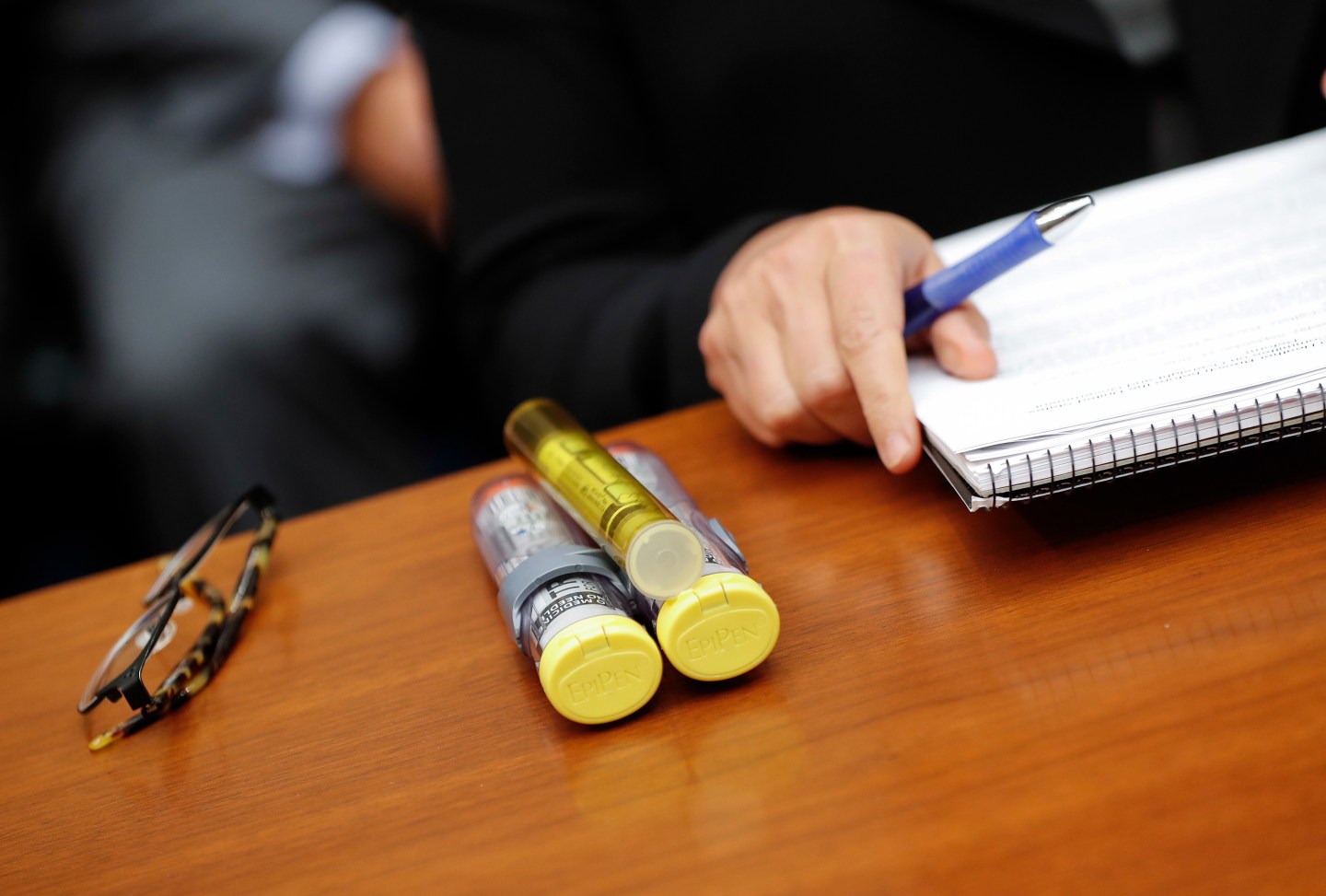 EpiPens that Mylan CEO Heather Bresch bought with her are seen on Capitol Hill in Washington, Wednesday, Sept. 21, 2016, as she testified before the House Oversight Committee hearing on EpiPen price increases. Bresch defended the cost for life-saving EpiPens, signaling the company has no plans to lower prices despite a public outcry and questions from skeptical lawmakers. (AP Photo/Pablo Martinez Monsivais)
Pablo Martinez Monsivais — AP

Mylan (MYL) CEO Heather Bresch has offered an… interesting take on her company’s widely-slammed decision to hike the price of the live-saving EpiPen by more than 400% over a decade: You’re welcome.

“I absolutely believe that if EpiPen had to be the catalyst to show this window of what families are facing in a high-deductible plan…then it would have been worth it,” the controversial big pharma chief told attendees at the Forbes Healthcare summit on Thursday. Bresch also said that she and her company take “full responsibility” for the price hike.

But responsibility and remorse are two very different things. And Bresch still hewed to the defensive tone she previously employed while testifying on the issue before the Senate Judiciary Committee in September, this time going so far as to assert that the whole episode was actually a good thing because it shed light on how insurers have been shifting drug costs onto their customers.

Some might argue that those comments are tone deaf and amount to passing the buck. After all, Mylan acquired the EpiPen from another company, and while Bresch insists that significant improvements have been made to the epinephrine-delivering product itself, she also admitted on Thursday that a big part of the price increase rationale was to fund marketing and awareness efforts for the device. But her underlying point isn’t totally invalid—the furor over drug price hikes like Mylan’s is forcing legislators and private companies alike to finally confront the issue head-on, and highlighting just how difficult the disparate and largely opaque American medical financing system makes it to address these problems in a serious way.

There’s still plenty of uncertainty about whether or not Congress will actually take steps on substantive legislative reforms that limit drug prices. In fact, pharma even won a big victory on election night in deep-blue California by defeating that state’s price cap popular referendum.

But the threat of a runaway PR fiasco that continues to infuriate consumers (and, in turn, may convince even reticent lawmakers to endorse more pricing regulations) is also causing major players to take their own actions—or at the very least to reconsider their thinking. Just compare Bresch’s comments to those of another Forbes summit attendee, Allergan (AGN) CEO Brent Saunders. Saunders insisted at the event and in an op-ed for the publication that biopharma should be prepared to act proactively to make their medicines more affordable, even under a Trump presidency and GOP-controlled Congress.

“The outcome on November 8 didn’t change the fact that many Americans are angry about the rising cost of healthcare and their medicines,” he wrote. “This anger will fuel the discussion about affordability well into the future,” adding, “Limit your price increases before we all face the impact of government regulation that stifles innovation and patient care.”

Saunders has previously pledged a “social contract” with Allergan customers promising fair drug prices following numerous high-profile scandals surrounding Martin Shkreli and Valeant Pharmaceuticals (VRX). And he built on that concept on Thursday, announcing that his firm will bolster its patient assistance programs for more than 40 drugs, including by helping people who make up to four times the federal poverty level buy their treatments for free.

Other pharma CEOs have endorsed a similar approach to pricing. Novartis (NVS) chief Joe Jiminez has been touting a pricing model that incorporates drugs’ real-world outcomes for years, stressing the importance of placing patients before profits; Regeneron (REGN) head honcho Len Schliefer had some tough words for fellow panelists from Eli Lilly (LLY) and Pfizer (PFE) (who argued that media reports about their own continued reliance on price increases to drive revenues is misleading) during Forbes’ event. “The real reason we’re not liked, in my opinion, is because we as an industry have used price increases to cover up the gaps in innovation,” he said. “That’s just a fact.”

As Bresch noted, drug pricing is a complicated issue, and the entire medical sector has a part to play in it. There’s a chain of events separating a drug’s topline list price, what benefits managers and insurers pay, and what customers ultimately wind up paying. And it’s hard to tell exactly what is driving up Americans’ medical costs at any given time because of the sheer number of players involved and a lack of easily available pricing information. But as these recent fiery debates within the drug industry underscore, pharma’s price hike tactics, now under constant public scrutiny, may well lead to more far-reaching change—whether imposed by legislation or by biopharma companies upon themselves.