Will Francois Fillon Save France From the Far Right? 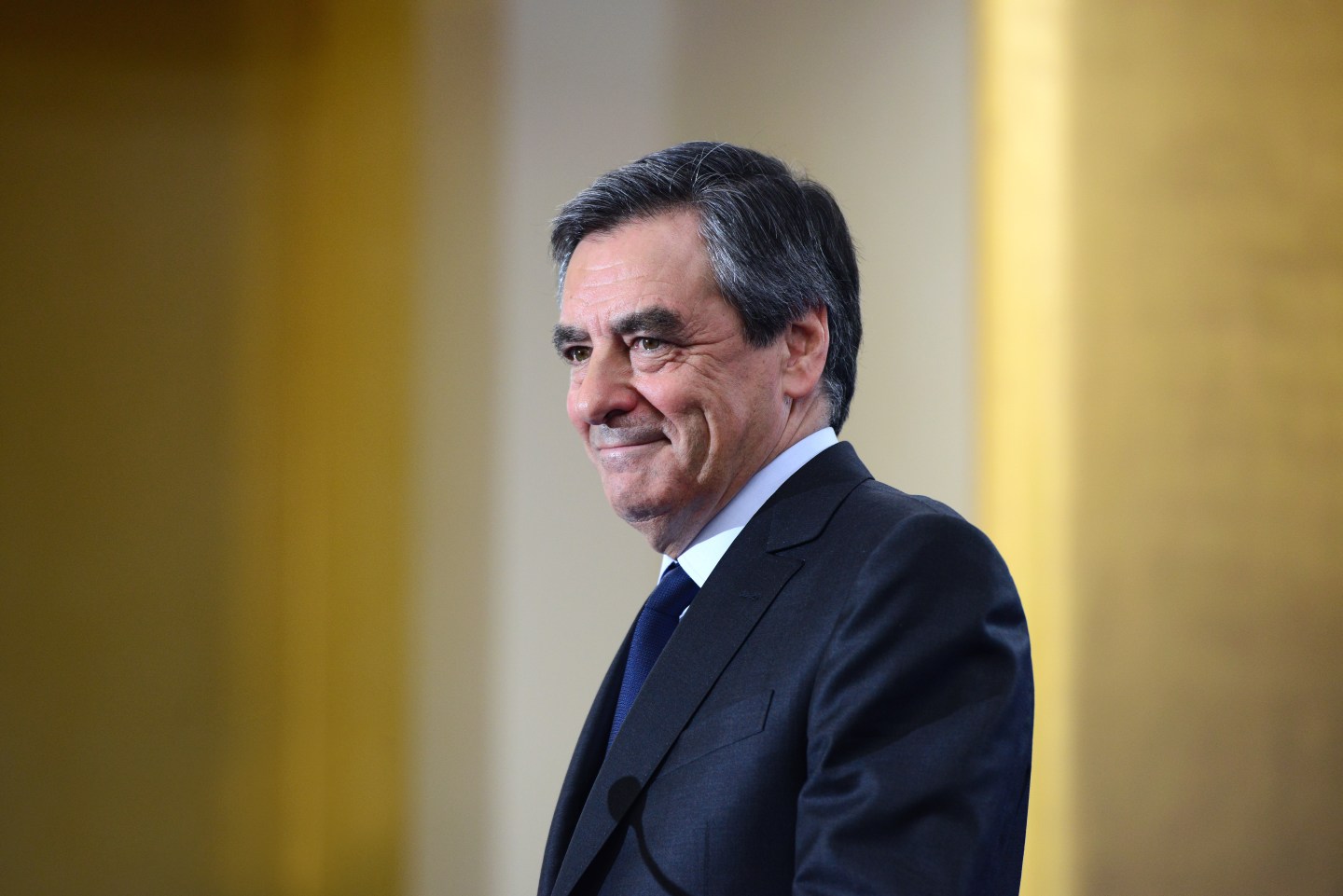 Marine Le Pen can already chalk up her first moral victory in the race to become France’s next President.

The race for the Elysée, which culminates in May, has already for months been overshadowed by a national preoccupation with stopping the Front National’s leader and the march of right-wing populism across Europe. On Sunday, France’s biggest center-right party, the Républicains, chose Francois Fillon. A staunch conservative who shares some of Le Pen’s anti-immigrant, anti-Muslim views, Fillon is seen as less extreme and therefore most likely to protect France from a far-right presidency.

Under French law, the presidential elections is held over two rounds, with the two top candidates in the first round progressing to a run-off. Almost all opinion polls this year have predicted that Le Pen will win the first round, so the key question has been who would be her opponent in the second. The Républicain candidate has seemed best positioned, because the ruling Socialist Party is hopelessly split between hard left and centrist factions, and led by a President, Francois Hollande, with the lowest ratings in history.

In a country traumatized by a string of high-profile terrorist attacks over the last two years, Fillon’s win perhaps shouldn’t have been surprising, but it caught many off guard: Only a month ago, Fillon was trailing badly behind rivals Nicolas Sarkozy and the veteran centrist, Alain Juppé. On Sunday night, Fillon defeated Alain Juppé, who had campaigned on a more consensual, socially inclusive ticket, by a resounding 2-to-1 margin.

A religious Catholic, Fillon has said he wants to deport foreigners suspected of links to Islamic terrorist groups without the niceties of a trial, and he thinks the state should dictate what swimwear Muslim women use. He’s also markedly more relaxed about leaving Russia and Vladimir Putin a free hand in Syria and Ukraine, and he also wants to break the Left’s grip on France’s educational system.

He doesn’t like gay marriage and wants to restrict adoptions by homosexual couples.

By making the most likely run-off a choice between Fillon and Le Pen, has the center of gravity of the elections lurched to the right? That depends on what you call ‘left’ and ‘right’.

Fillon may convincingly promise to satisfy the biggest single demand of the French electorate–security–but he also represents an economic model which French voters have rejected every time they’ve been asked: the kind of small-state, free-market liberalism championed by Ronald Reagan, Margaret Thatcher (whom he openly admires) and, more recently, Donald Trump (whom he doesn’t openly admire). Some may think if that as ‘right-wing’, but in French politics, as often as not, ‘right-wing’ means the kind of Gaullist dirigisme that left the ‘commanding heights’ of the economy (including, crucially, the currency) under state control. Le Pen, not Fillon, is the heir to that tradition.

Fillon has said he wants to cut public spending by 100 billion euros a year ($106 billion) to end France’s chronic budget deficits. This will involve cutting 500,000 jobs in France’s highly-unionized and famously battle-ready public sector. If Fillon gets his way, those that remain will have to work–gasp!–39 hours a week, instead of the 35 hours that has been the limit since the 1990s. Even worse, Fillon wants to raise the state retirement age to 65 from as little as 62 today. At the same time, he’s promising tax cuts and a bonfire of red tape, especially for small businesses and the self-employed.

Fillon already spent five years as Prime Minister under Nicolas Sarkozy trying to deliver much the same agenda, and failing. Making France more like the U.S. and Britain has never been an election-winner, and Fillon’s free-market tendencies leave him open to the risk of losing votes to Le Pen on the traditional Left, even as he wins them away from the FN on security and identity issues.

In a Fillon v Le Pen run-off, the kind of French voter who likes a strong state and strong labor protection, who mistrusts foreign innovation, may will be more inclined to vote for Le Pen.

Already, Le Pen is pushing the buttons once monopolised by the Socialists, branding his platform as “the worst program of social destruction that has ever existed.” Accusations of being in thrall to a German fetish for budget balance will surely follow.

The real question is therefore whether Fillon’s surge in popularity can last, or whether he has peaked too early. Fortunately for him, the Socialists are so divided as to make him a near shoo-in for, at least, second place in the first round: Hollande still hasn’t ruled himself out, Prime Minister Manuel Valls can’t declare until he does, and the young reformist Economy Minister Emmanuel Macron has already left the government to run as an independent. A Harris poll at the weekend put Fillon 11 points clear of his nearest Socialist challenger, Jean-Luc Mélenchon, who represents the hard left wing of the party.

That’s a big enough margin to suggest it will be a “Right” vs “Far Right” run-off next May, even allowing for the failings of the polling industry. The same Harris poll yesterday suggested that he would beat Le Pen in the run-off as comfortably as he did Juppé. It’s unlikely to get any better for him, but right now, the Elysée looks like Fillon’s to lose.