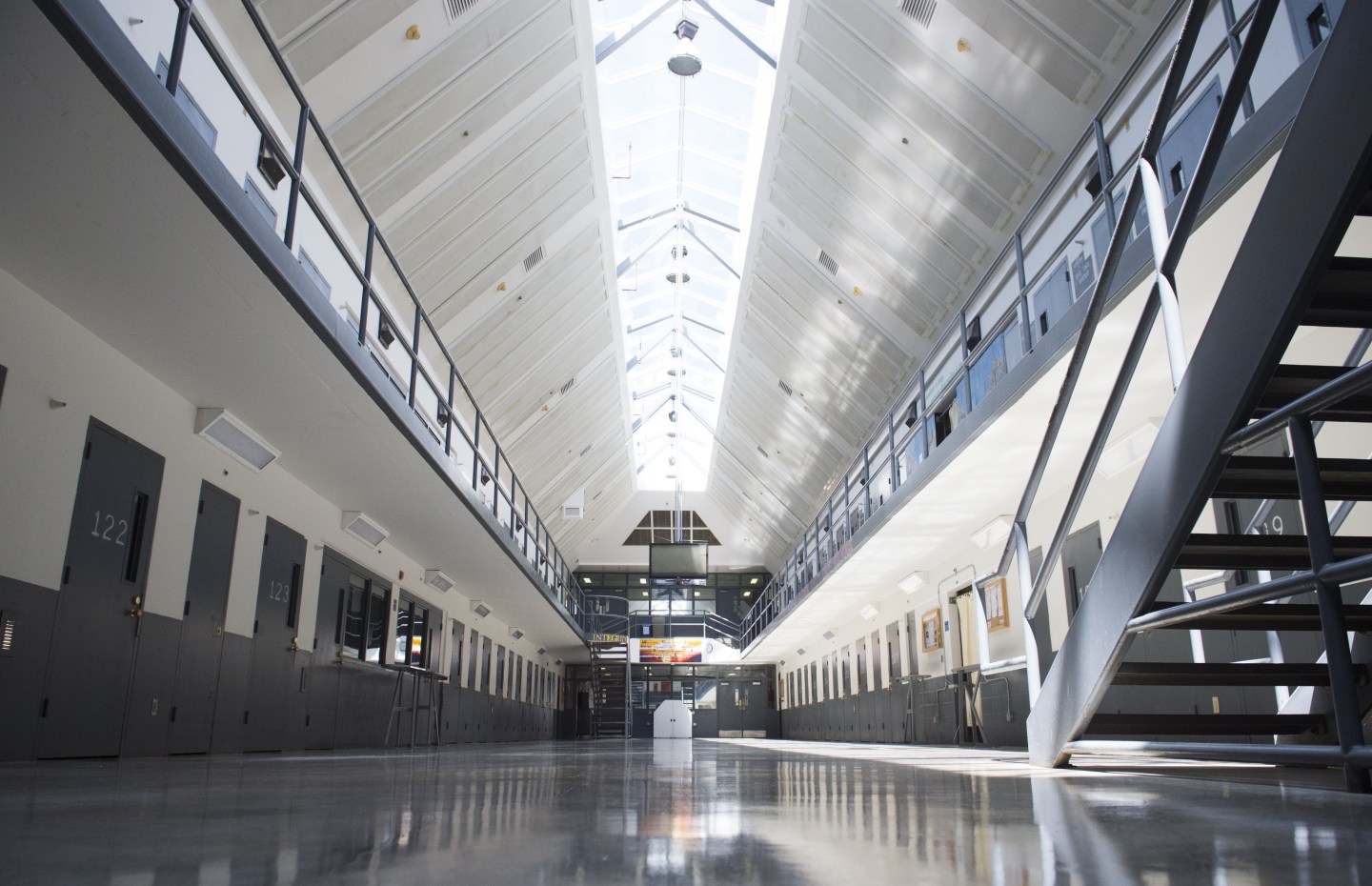 A prison cell block is seen following a tour by US President Barack Obama at the El Reno Federal Correctional Institution in El Reno, Oklahoma, July 16, 2015. Obama is the first sitting US President to visit a federal prison, in a push to reform one of the most expensive and crowded prison systems in the world. AFP PHOTO / SAUL LOEB (Photo credit should read SAUL LOEB/AFP/Getty Images)
SAUL LOEB AFP/Getty Images

Overseeing chronically overcrowded, rapidly deteriorating facilities, Oklahoma’s prison director is seeking to triple his department’s budget in hopes of reversing decades of deferred maintenance and neglect that has jeopardized a linchpin of public safety.

“We’re not a listing ship. We are a sinking ship,” Department of Corrections Director Joe Allbaugh said after the state Board of Corrections approved his nearly $1.65 billion budget request for the fiscal year that begins July 1 and sent it to state lawmakers for their review.

“I’ve had several legislators ask me if I’m serious. I’m deadly serious about this,” Allbaugh said. “Corrections is a core function of state government. Our No. 1 priority is public safety, and public safety at our facilities is currently at risk.”

The budget request seeks about $10 million to pay for a 5% salary increase for corrections workers to help recruit and retain staff and more than $123 million to repair defective equipment and structures at 17 state prisons and six community corrections centers. It also looks ahead, seeking almost $850 million to build two 2,000-bed medium security prisons to accommodate what the Oklahoma Justice Reform Task Force estimates will be 25 percent growth over the next decade—more than 7,500 inmates—to an already-overcapacity population of almost 27,000.

“The Oklahoma taxpayer has a right to know what kind of shape their property is currently in,” Allbaugh said. Among other things, the electronic panels that control locking devices on individual cells “malfunction all the time,” Allbaugh said.

“Our turnover rate with correctional officers is about 39% annually. We have a sizable proportion of our population that have mental health issues.”

But state lawmakers and Gov. Mary Fallin say the request is unrealistic following successive years of budget shortfalls due to declining revenue largely from low energy prices. Another $600 million shortfall has been projected for the 2017-2018 fiscal year.

Fallin said Allbaugh has correctly pointed out “that for many decades his department’s needs have been neglected, which has left our prisons with old buildings and overcrowding.

“However, with a two-year downturn in the energy industry, it has been difficult to make many of the changes Oklahoma needs,” Fallin continued. “Despite these economic challenges, I approved $27.6 million of emergency funding earlier this year to the Department of Corrections, which helped prevent drastic cuts that would have jeopardized the safety, security and operations of our prison facilities and our citizens.”

For more on prison, watch:

Allbaugh, who took over in January and was director of the Federal Emergency Management Agency under President George W. Bush, said a critical concern is that the underfunded, understaffed condition of state prisons could lead to loss of life in a violent incident that threatens inmates, correctional officers and the public alike.

“It’s not if we’re going to have one, it’s just when,” Allbaugh said.

Part of the reason the prison population has swelled is the recent adoption of sentencing guidelines that require many offenders to serve at least 85% of their sentences before they are eligible for parole. The Justice Reform Task Force, established by Fallin to conduct a comprehensive review of the state prison system, projects that women and nonviolent offenders will be the bulk of the growth in the next 10 years—both of whom already comprise a large portion of the prison population.

“We’ve got to have shorter sentences,” said Rep. Bobby Cleveland, R-Norman, vice chairman of the House Public Safety Committee that oversees the state prison system. “This 85% thing has got to change. That’s keeping our prisons full.”

Correctional policy professionals said they agree that state’s prisons need a massive infusion of money to stop their downward spiral.

“I don’t think they’ve always gotten it over at the Capitol,” said Sean Wallace, policy director for the Oklahoma Public Employees Association. “If you don’t tell them the real needs, you won’t get the real help.”

Former Republican state Rep. Gus Blackwell, who is now director of government relations for Oklahoma Corrections Professionals, which represents state corrections and Pardon and Parole Board workers, believes the state “fiscally starved DOC to death because we’ve basically kept appropriations the same while the number of inmates has gone up drastically.”

Starting pay for a correctional worker is $12.78 an hour—lower than what many convenience store workers earn—and about one third of that workforce qualifies for food stamps, Blackwell said.

“Across the board, pay is low. And they are part of law enforcement,” he said. “It all falls apart without them.”