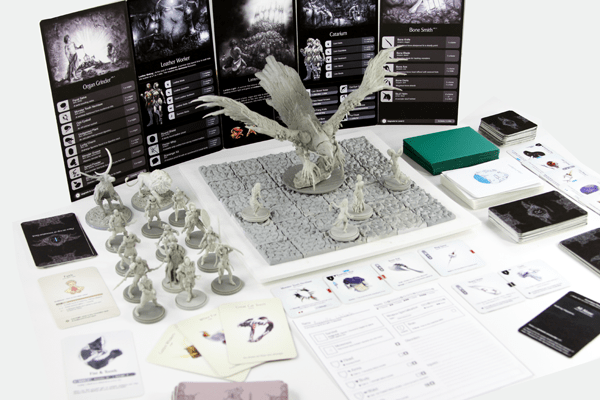 A Kickstarter for the reprint of a fantasy-horror board game called Kingdom Death: Monster has raised nearly $5 million dollars since launching November 25th. As of this writing, with more than 40 days left in the fundraising campaign, the tracking site Kicktraq says the campaign is trending towards an eye-watering final total of more than $72 million.

The tabletop game lets groups of players “hunt intelligent monsters and develop your settlement through a self-running campaign,” and includes a huge array of detailed (and frequently disturbing) playing-pieces. It’s described as a “boutique” product, and the most popular pledge level for the campaign is $300.

It’s unlikely the campaign will quite fulfill Kicktraq’s astronomical prediction. Kicktraq’s trend calculations are not terribly refined, and tend to skew high in the early days of a campaign, because that’s when the bulk of pledges come in.

But the tally could still be staggering. Past data shows that 45-day campaigns generally raise around 10% of their total backing in their first two to three days, suggesting Kingdom Death could realistically top $50 million. That would still dwarf the totals raised by Kickstarter’s previous biggest projects, the Pebble Time watch ($20.3 million) and the Coolest Cooler ($13.3 million).

Kingdom Death was helped by the fact that this is its second time around. The game was originally developed following a Kickstarter campaign that raised just over $2 million in 2013. It became something of a cult phenomenon, while a limited production run led to copies frequently selling for upwards of $500 on Ebay. It also stirred up controversy over what some claimed were sexist and misogynistic depictions of female characters.

For more on crowdfunding, watch our video.

Kingdom Death’s second campaign becoming the most successful Kickstarter ever would be a punctuation mark on a much broader trend. Kickstarter has ushered in a golden age for tabletop boardgames, with campaigns for games about dungeons, aliens, and mutants fairly routinely raising two or three million dollars.