This Company Delivers Honey Bees Straight to Your Home 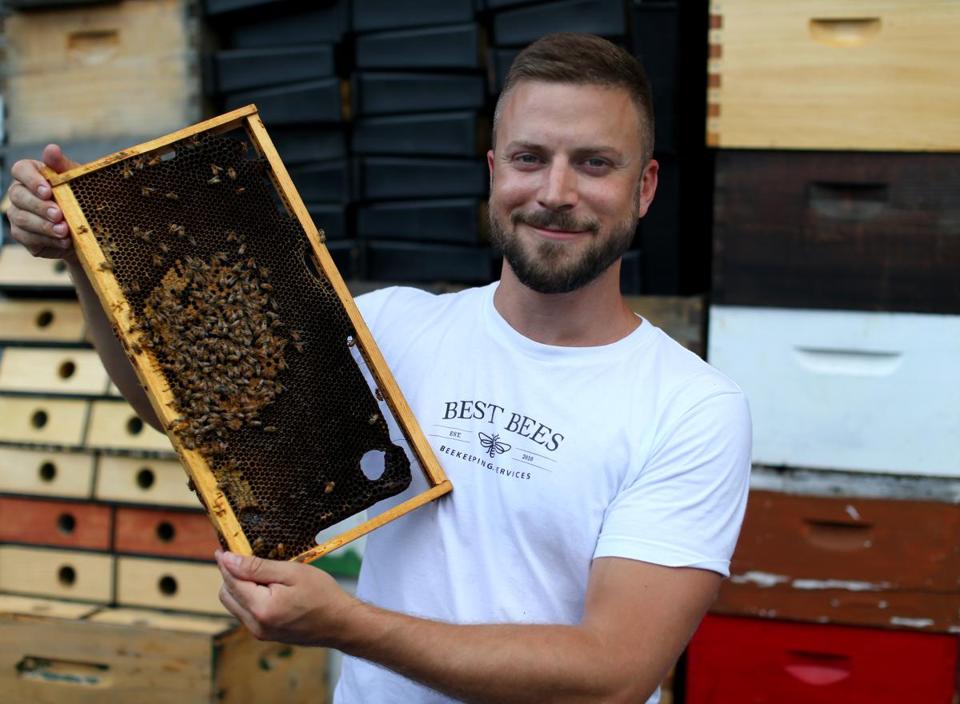 In my hooded white suit, I must look like an astronaut who has crash-landed on the green roof of the Solaire, a residential building in Manhattan.

The reality is less strange, if not by much: The suit is to protect against stings. In front of me, beekeeper Tom Whitburn is slowly levering off the lid of a wooden box. Inside, I can see hundreds of golden honey bees crawling sleepily over the waxen honeycombs, waggling their antennae. Whitburn slides out an interior panel, and hands it to me. Coated in dense, dark honey, it’s surprisingly heavy.

Whitburn works for Best Bees, a Boston-based startup that installs on-demand beehives. Founded in 2010 by bee researcher and enthusiast Noah Wilson-Rich out of his South End apartment — the company’s first customer was his landlord — today it operates 660 beehives in and around nine U.S. cities, including Chicago, Los Angeles, New York, Seattle and Washington, D.C.

At first glance, Best Bees’ very existence reads like a parody of the increasingly specialized on-demand economy: for $1,000 a year ($1,625 for businesses), the company delivers a classic Langstroth hive box, equipped with a colony of bees, plus an egg-laying queen. Included in that price: checkups from a local beekeeper who stops by once a month to make sure the hive is thriving and harvests the honey, which customers get to keep.

Airbnb, for example, has four hives installed in its San Francisco office; it uses the honey in its kitchen. So do a number of top hotels in Boston, New York and Denver.

That Best Bees aligns with this desire to eat locally, an increasingly popular trend in urban centers, has helped it grow into a sustainable business. It’s been profitable for three years, and expects to make $1.3 million in 2016. It recently added Portland, Oregon to its service area, and also plans to bring Hawaii on board in the coming months.

But it’s not just about the money. The company also has a social purpose: save the bees.

Between 2015 and 2016, the U.S.lost nearly half of its honey bee colonies, according to Bee Informed Partnership, a bee industry research group. Prior to that, millions more hives disappeared due to a mysterious situation called colony collapse disorder, where entire bee communities simply disappeared, without leaving any bodies behind. While the spread of parasites, increased pesticide use, and loss of natural habitats likely contributed to the decline, experts still can’t fully explain the drop off. Best Bees’ hives are subject to some of the same alarming national trends, with 37.5% of its urban hive population and 60% of non-urban hives dying off or disappearing over time. The company replaces dead and sick hives.

“We explain to our clients that this is why we do what we do,” Wilson-Rich says. Through its connected non-profit research entity, called the Urban Beekeeping Laboratory, the company is using its hives to do some detective work. Each time Best Bees employees check up on a hive, they use a mobile phone app, designed by the company, to record data like honey production, bee health, and colony size. The information is then analyzed, in hopes of determining causes for the decline. “Each beehive is a data point, and we manage them in a uniform way,” Wilson-Rich says.

Related: Meet the Woman Working to Make Delivery-by-Drone a Reality

Already, there have been some surprising findings. For example, beehives in urban environments produce two to three times as much honey compared to their counterparts in areas with less development, likely because city parks and gardens provide a wider diversity of plants and flowers.

As is the case for most studies, however, determining a causal effect is difficult. Catherine Tucker, a professor of management science and marketing at MIT’s Sloan School, worries the scientific data Best Bees collects may be skewed, as the hives typically will wind up in affluent areas, where people can afford the annual hive maintenance fee.

Wilson-Rich has thought of this, too. Recently, Best Bees launched a program through its nonprofit that allows donors to sponsor hives in less affluent neighborhoods, for example at schools, libraries and community gardens. Nearly 50 have been donated so far.

“From a social justice perspective, we want everyone to have access to bees,” Wilson-Rich says.