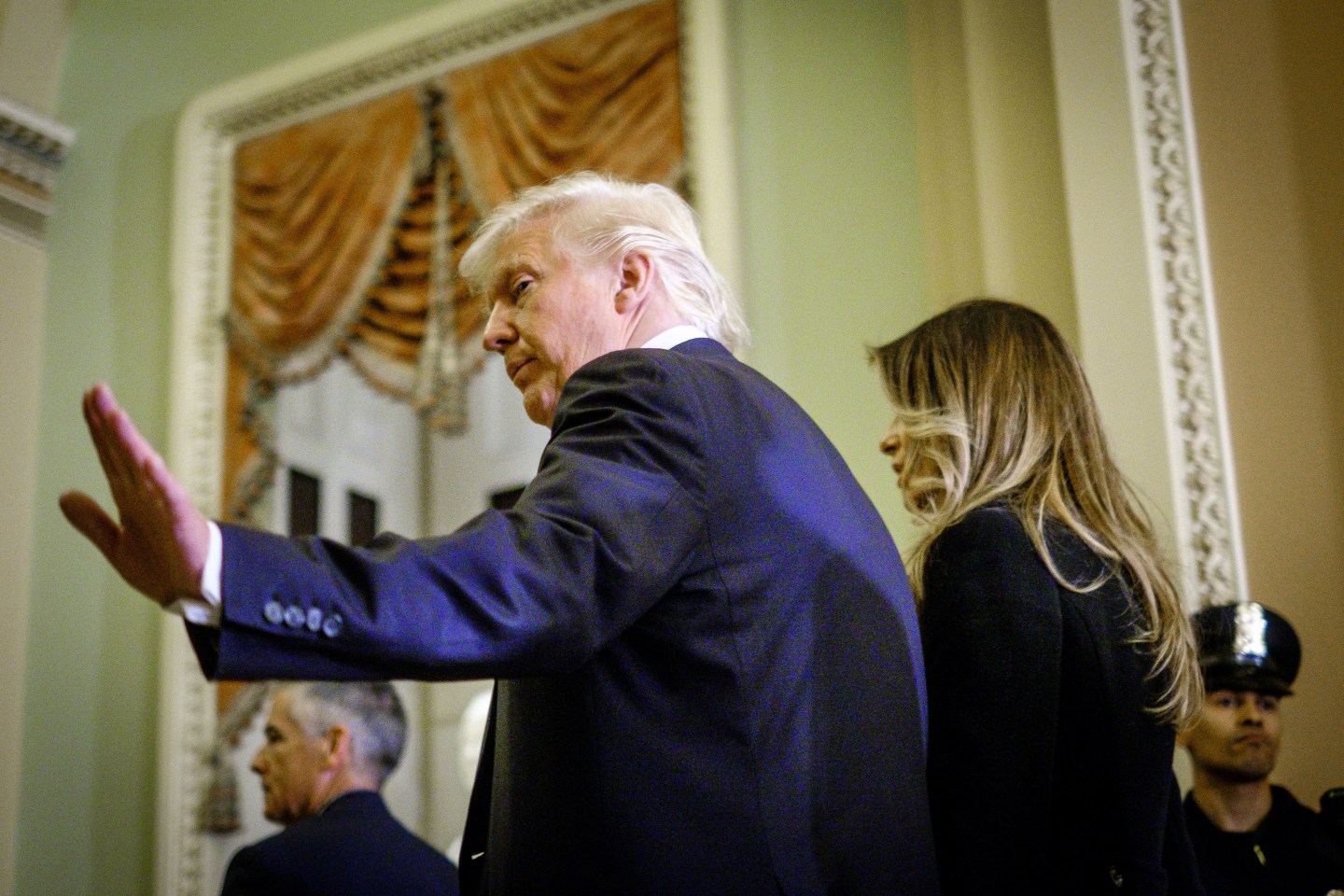 U.S. President-elect Donald Trump, left, and First Lady-elect Melania Trump exit after a meeting with Senate Majority Leader Mitch McConnell, a Republican from Kentucky, not pictured, the U.S. Capitol in Washington, D.C., U.S., on Thursday, Nov. 10, 2016. Trump's first visit to Washington since winning the Nov. 8 election is a key step toward bridging the nation's painful divisions before he takes the oath of office in January. Photographer: Pete Marovich/Bloomberg via Getty Images
Photograph by Pete Marovich—Bloomberg via Getty Images

President-elect Donald Trump has promised to “drain the swamp” of what he calls the corrupt Washington DC establishment. As he prepares to take power, those who voted for Trump—as well as some who didn’t—are hoping that his distance from the Beltway will allow him to deliver on this promise.

Trump may be tempted to double down on his status as the ultimate political outsider by filling his administration with fellow Washington neophytes, but that would be an awful mistake. He must rely on outsiders enough to retain the populist image so central to his political image, but not so much that his staff lacks the knowledge of how to actually get things done in the capital. Trump’s first personnel choices show him trying to strike a sensible balance: Reince Priebus as chief of staff will be able to draw on the insider insights afforded by his time as chairman of the Republican National Committee, while the appointment of former Breitbart News head Steve Bannon as chief strategist continues to position Trump as an insurgent.

During the campaign, Trump managed to remain aloof from Republican political professionals to a remarkable degree, and that choice turned out to serve him well. He has good reason to be skeptical of a Republican establishment that has been unpopular among voters for over a decade. The party’s mid-2000s Jack Abramoff–related scandals and complicity with special interests earned it a stinging rebuke in the 2006 congressional elections and made President George W. Bush historically unpopular by the end of his time in office. The following two Republican candidates, John McCain and Mitt Romney, positioned themselves as continuous with Bush-era Republicans, and arguably paid a political price for doing so. So Trump’s (and Bannon’s) understandable instinct may be to see offers of help from old hands of the Washington scene as Trojan horses.

Before Trump decides to spurn them, though, he should ponder the example of Jimmy Carter. Carter, too, sold himself to the American people as a real DC outsider, emphasizing his identity as a peanut farmer and born-again Christian whose only political experience was a single term as Georgia’s governor. And he stayed true to his roots after his victory over President Gerald Ford in 1976, staffing his White House with a close-knit group of associates that came to be known as the “Georgia Mafia,” including Budget Director Bert Lance, Attorney General Griffin Bell, Press Secretary Jody Powell, and his closest advisor, Hamilton Jordan. Meanwhile, he reduced the size of the White House staff by a third.

None had experience in Washington, and it soon showed. Carter’s administration quickly bungled its relationship with powerful Democratic House Speaker Tip O’Neill and other key members of Congress by making sure everyone knew that the new White House wanted no part of the economy of favors that had kept relations smooth in Washington. There were also a number of minor snubs, such as seating the speaker’s family near the kitchen at the inaugural ball, which led to animosity for Carter on Capitol Hill.

More importantly, a couple of months into his term, Carter put out a “hit list” of pork barrel projects he vowed he would never sign, which included a number of projects dear to O’Neill. Carter showed he wouldn’t just accept business as usual, but soon reneged on parts of his promise, undercutting his credibility. Congress retaliated at the Georgia Mafia’s high-handedness by refusing to pass administration priorities, including key parts of their consumer protection and tax plans. Before long, the country had formed the fair impression that Carter was acting like an amateur and out of his league in Washington, an image the president was never entirely able to shake.

So if Trump wants to succeed, he and his new team must understand that governing requires a coalition encompassing many established parts of the Republican Party and staff his government accordingly. Otherwise, he’s more likely to get stuck in fruitless political infighting than to enact sudden and lasting reforms. A one-term presidency like Carter’s—or worse, given the free-flying talk of impeachment these days—could result. Trump’s choice of Priebus as chief of staff indicates that the president-elect is attuned to this potential difficulty.

But if there are perils in being too much of an outsider, that hardly means that Trump has an easy path to a successful and widely accepted government by staffing his administration like just another conventional Republican. His promise of a clean break with the Bush-era party was central to his primary success, as was his self-portrayal as a winner who can change everything by driving a hard bargain. Settling in to business as usual could turn the American public deeply cynical of Trump’s presidency from the start. Bannon’s central role in the new administration suggests that Trump understands this, too.

Trump is sure to find that running a government is a good deal harder than selling his message on the campaign trail. While skepticism as to whether he can manage the transition is warranted, his first staffing decisions show good instincts toward striking a balance that will allow him to govern effectively.

Philip Wallach is a senior fellow at the Brookings Institution.