Racist Incidents Are Up Since Donald Trump’s Election. These Are Just a Few of Them 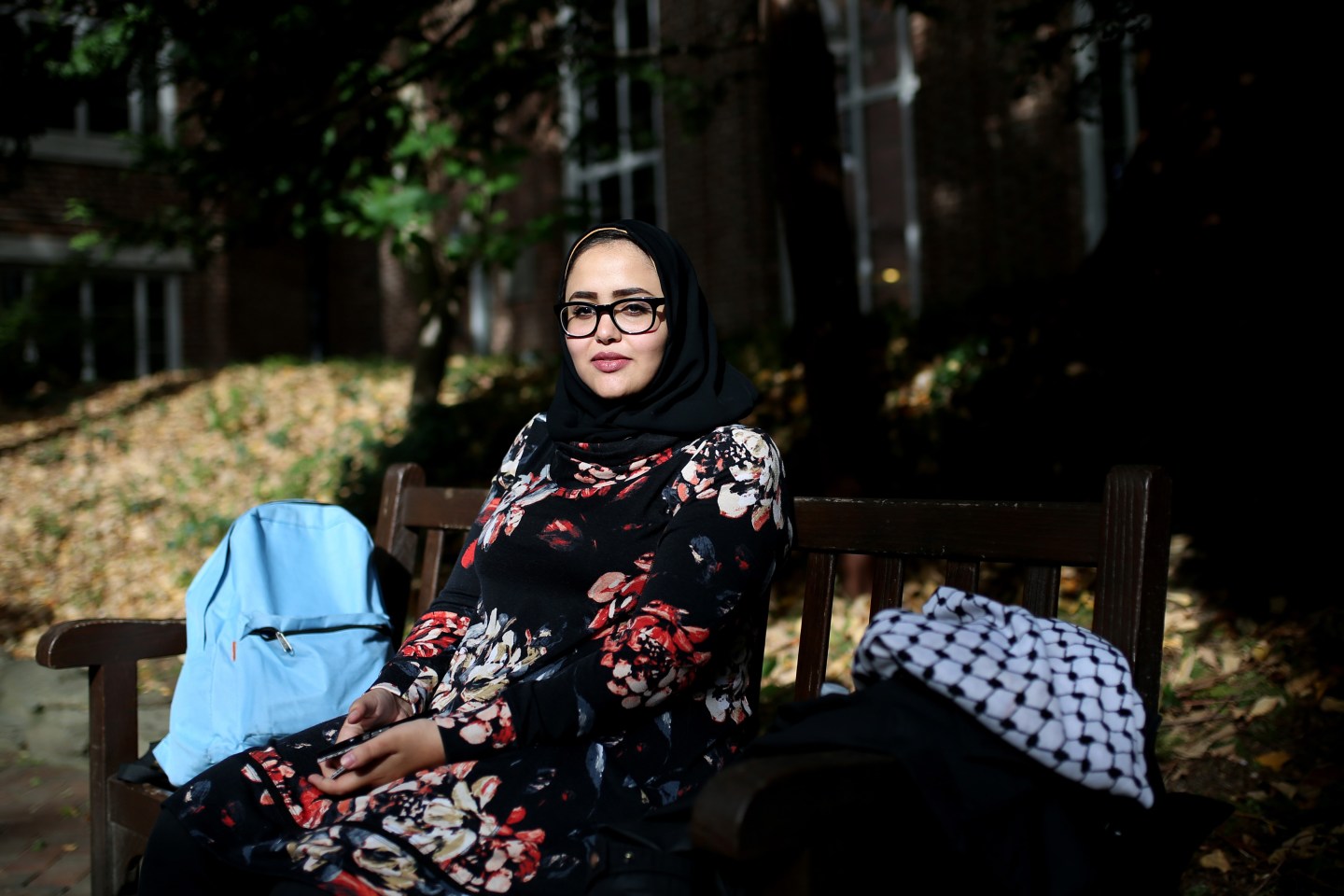 NEW YORK, UNITED STATES - OCTOBER 26: A Muslim woman, Sarah A. Aly, Mentorship Coordinator at Network for Arab American Professionals, poses for a photo during an exclusive interview for "Anadolu Agency (AA)" on raising hate speech and islamophobia ahead of the US presidential elections in New York City, NY, USA on October 26, 2016. In a part of interview Aly said, "For me, Trump is not the source or the epitome of my marginalization as a Muslim woman in this country. My first interaction with the state was at 15 years old, when the FBI came knocking at my door in connection with a Facebook status they deemed suspicious. It has continued since, the most recent being an undercover cop at my school, Brooklyn College, posing as a girl named Mel, inserting herself in circles of friends and spaces I organized in, for four years. It has become increasingly hard for me to form bonds and friendships with people, because I don't know how to trust anymore. For a very long time since, I've felt a longing to move back to Egypt, where my father is from. A lot of my friends and cousins don't really get it. I tell them I don't feel welcome in the states and they assume its because of incidents in the streets or racist comments and they tell me that I should get over that because I will still have a much better life in America than in Alexandria. But it isn't just the slurs or dirty looks. My discomfort here is not just a result of the shouts "go back to your country" that I can just joke about, saying I don't think I can go live at Lutheran Medical Center, where I was born. My discomfort is more constant, because the state has made it clear I don't belong here, clear that they viewed me as a criminal long before I even had any political views. It didn't take Trump for me to realize this. I've seen in in the home raids and the deportations of innocent family friends and I've seen it in hate crimes, and I've seen it in laws passed by Obama that strip a certain type of people, people that look like me, of our rights in the interest of "national security." In some ways, I'm actually glad that Trump is so bluntly xenophobic. He makes our reality much more obvious. The people who believed America was "post-racial" or colorblind are having a reality check, and he exposes America for what it is, and what it always has been: founded and built on racism." (Photo by Mohammed Elshamy/Anadolu Agency/Getty Images)
Anadolu Agency Getty Images

In the days since the presidential election, states across the country have seen increased incidents of racist or anti-Semitic vandalism and violence, many of which have drawn directly on the rhetoric and proposals of President-elect Donald Trump.

The Southern Poverty Law Center has counted more than 200 complaints of hate crimes since Election Day, according to USA Today.

“Since the election, we’ve seen a big uptick in incidents of vandalism, threats, intimidation spurred by the rhetoric surrounding Mr. Trump’s election,” Richard Cohen, president of the Southern Poverty Law Center told USA Today. “The white supremacists out there are celebrating his victory and many are feeling their oats.”

Many advocacy groups have called on Trump to condemn such attacks and threats, but the President-elect has yet to do so.

Here are a few examples:

When the rector at the Episcopal Church of Our Saviour in Silver Spring, Maryland opened the church on Sunday morning, he found that a sign advertising Spanish services had been ripped and vandalized with the words, “TRUMP NATION WHITES ONLY.” The same message was written on a brick wall near the church’s memorial garden.

Our Savior, Hillandale and St. David's, Bean Blossom were both vandalized in the name of Trump. They are Episcopal parishes in MD and IN.

Henley said other churches in the area, especially those with large Latino congregations, have been targeted in similar ways, and she worries the community will see more incidents of racism in the future.

“A year ago, it wasn’t possible to be a racist bigot and get elected president,” she said. “People now feel free to say racist things that they wouldn’t have said before.”

Swastikas were drawn on several doors in a residence hall at the New School in New York City on Saturday. Three Jewish women live in the suite where one of the swastikas was drawn, according to a tweet from one of the students who lives there.

We woke up to this on our door, in a dorm at @TheNewSchool, where 3 Jewish women live. @ShaunKing @deray @parsonsdesign pic.twitter.com/tK1IpXA1ae

“That someone would attempt to create fear amongst us is inexcusable. This is not what we as a community stand for, nor is it something we will tolerate,” New School President David E. Van Zandt said in a statement, calling the vandalism an “illegal, inflammatory and hurtful influence on our campus.” He said the New York City Police Department is investigating the incident, and campus security has been increased.

“Hate speech is reprehensible, and has no place in NYC. To the affected, we stand with you. To the perpetrators, we are better than this,” New York City Mayor Bill de Blasio said.

A residence hall at SUNY Geneseo was also vandalized with a swastika and the word “Trump” on Friday, the Genesee Sun reported.

Anti-Semitic graffiti—including a swastika and the words “Heil Trump”—appeared at a bus stop at the University of California at San Diego on Thursday. In a statement, Hillel of San Diego said it worked with the office of Vice Chancellor of Student Affairs, Campus Police, and the Anti-Defamation League to ensure the graffiti was removed.

Journalist Rob Burgess shared photographs of the Saint David’s Episcopal Church in Bean Blossom, Indiana of a Sunday incident in which the church walls were vandalized with swastikas, as well as the words “Heil Trump,” and a homophobic slur that, presumably, refers to the Episcopal Church’s stance on gay marriage.

Black students at the University of Pennsylvania were added to a racist GroupMe message on Friday that included violent threats toward them. The messages were sent by someone using the name “Daddy Trump,” and the group was named “MudMen,” Philly.com reported.

Screenshots of the account shared on social media showed messages with racial slurs, a calendar invite for a “daily lynching” and old images of African-American lynchings.

It also included references to Trump’s comments about grabbing women by the genitals without consent.

A man threatened a Muslim student at the University of Michigan on Friday, demanding that she remove her hijab or be set on fire with a lighter, the Detroit Free Press reported.

Police in Ann Arbor, Mich., are investigating the incident, and the Michigan chapter of the Council on American-Islamic Relations condemned it.

“Our nation’s leaders, and particularly President-elect Donald Trump, need to speak out forcefully against the wave of anti-Muslim incidents sweeping the country after Tuesday’s election,” Dawud Walid, the chapter’s executive director, said in a statement.

In a separate incident on Thursday, students at Royal Oak Middle School in Royal Oak, Mich., chanted “build that wall!” during their lunch period, echoing Trump’s promise to build a wall on the Mexican border to prevent illegal immigration.

“In responding to this incident—indeed in responding to this election—we need to hear each other’s stories, not slogans, we need to work towards understanding, not scoring points, and we need to find a way to move forward that respects and values each and every member of our community,” Superintendent Shawn Lewis-Lakin said in a statement.