A Trade War With China Is Likely Under Donald Trump 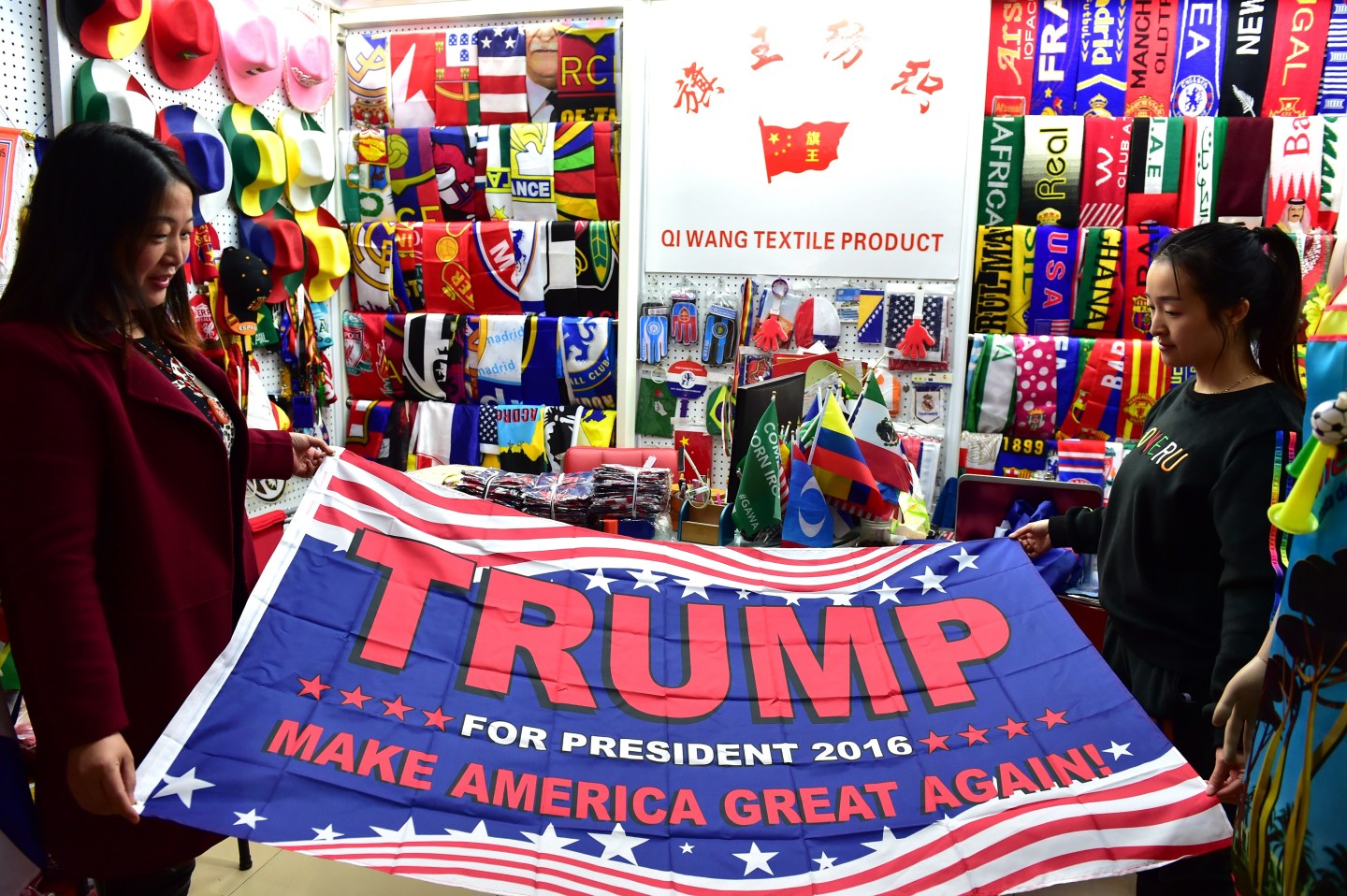 U.S.-China relations, doubtlessly the world’s most important bilateral ties, are about to get a stress test.

Among many potential foreign policy challenges facing the administration of president-elect Donald Trump, a rapid deterioration in the relations between Washington and Beijing will have profound – and decidedly negative – consequences for global peace and prosperity. The most immediate trigger of a downward spiral of U.S.-China relations, which have been carefully nurtured by both Republican and Democratic administrations over decades, is almost certain to be a trade war with China. A centerpiece of Trump’s winning campaign strategy is trade protectionism. To gain the support from blue-collar manufacturing workers in the American heartland, Trump has vowed, among other things, to abrogate trade agreements and impose unilateral tariffs. In the case of China, he has floated the idea of slapping tariffs as high as 45% on imports from China.

If Trump carries out his campaign pledge, China’s exports to the U.S., worth $483 billion in 2015, could collapse. Needless to say, American exports to China, estimated at $116 billion as of 2015, will plunge as China retaliates. The economic consequences of such a trade war will not be restricted only to the U.S. and the Chinese economy. Since 35% of China’s exports in 2015 was “processing trade” (China imports components from other countries and then assembles them for exports), $169 billion of Chinese exports to the U.S. in 2015 actually represented imports from Japan, South Korea, Taiwan, and others. Obviously, these economies, all critical trading partners of the U.S., will be collateral damage.

Besides a potential trade war, U.S.-China economic relations could suffer another blow during a Trump administration: more restrictions imposed on Chinese investments in the U.S. Trade protectionism is likely to be extended to restrictions on Chinese acquisition of American technologies and companies because of fear that they could endanger American jobs. The prospect of concluding a U.S.-China bilateral investment treaty (BIT) now looks very dim.

As trade and investment constitute the most important foundation of U.S.-China relations, the dismantling of this foundation will cause spillover effects in other areas, most critically East Asian security.

Despite its recent muscle-flexing in the South China Sea, Beijing’s security policy in East Asia has always been constrained by its economic interdependence with the U.S. As the mutual bond of commerce unravels under a Trump administration, China could be much less restrained in challenging American security interests in East Asia.

Should Chinese leaders decide to do so, they would be encouraged by Trump’s campaign rhetoric about reducing American security commitments to its allies in Asia. In all likelihood, Beijing may want to test whether a Trump administration will honor long-standing American security guarantees to its friends and allies in East Asia. In light of the near certainty that Trump will scrap President Barack Obama’s strategic “pivot to Asia” (which includes the Trans-Pacific Partnership, or TPP, as its economic pillar), Chinese leaders will be especially emboldened to challenge American presence in Asia.

Of the potential regional flash points that could bring U.S. and China face to face in a dangerous military confrontation, two stand out – the South China Sea and Taiwan.

Under President Barack Obama’s administration, the U.S. has consistently opposed China’s unilateral claims to sovereignty over much of the South China Sea. If Trump believes that the South China Sea is none of Washington’s business, Beijing will likely further escalate its activities, such as building military facilities and drilling for oil, thus escalating risks of conflict with Vietnam and the Philippines. As more than $5 trillion worth of commerce transits through the South China Sea each other, a military conflict or acceptance of China’s de facto control of the area will gravely undermine American security interests.

The other flash point is Taiwan. In January this year, the pro-independence Democratic Progressive Party decisively won the presidency and the legislature of the self-governing island, which China also claims. Relations between Taiwan and China are deteriorating. Washington maintains a delicate “One-China policy,” which maintains official ties with Beijing but also honors its commitments to Taiwan’s security. One obvious danger is that Trump, who has no knowledge or experience in this area, could say or do something that Beijing perceives as reflecting a fundamental policy shift. In particular, Trump’s aversion to maintaining American security commitments in East Asia could be interpreted by China as his willingness to abandon Taiwan.

Such a reading could encourage Beijing to engage in military intimidation against Taiwan to test Trump’s resolve, thus precipitating a crisis.

Before Trump’s stunning victory on Wednesday, the conventional wisdom was that Hillary Clinton would take a tougher policy toward Beijing than Trump. Now that Trump is headed for the White House, it is worth noting that his China policy, to the extent there is such a thing, consists of trade protectionism on the one hand and abandonment of long-standing security commitments on the other. If anything, this is a recipe for conflict.

Minxin Pei is a professor of government at Claremont McKenna College and author of China’s Crony Capitalism.