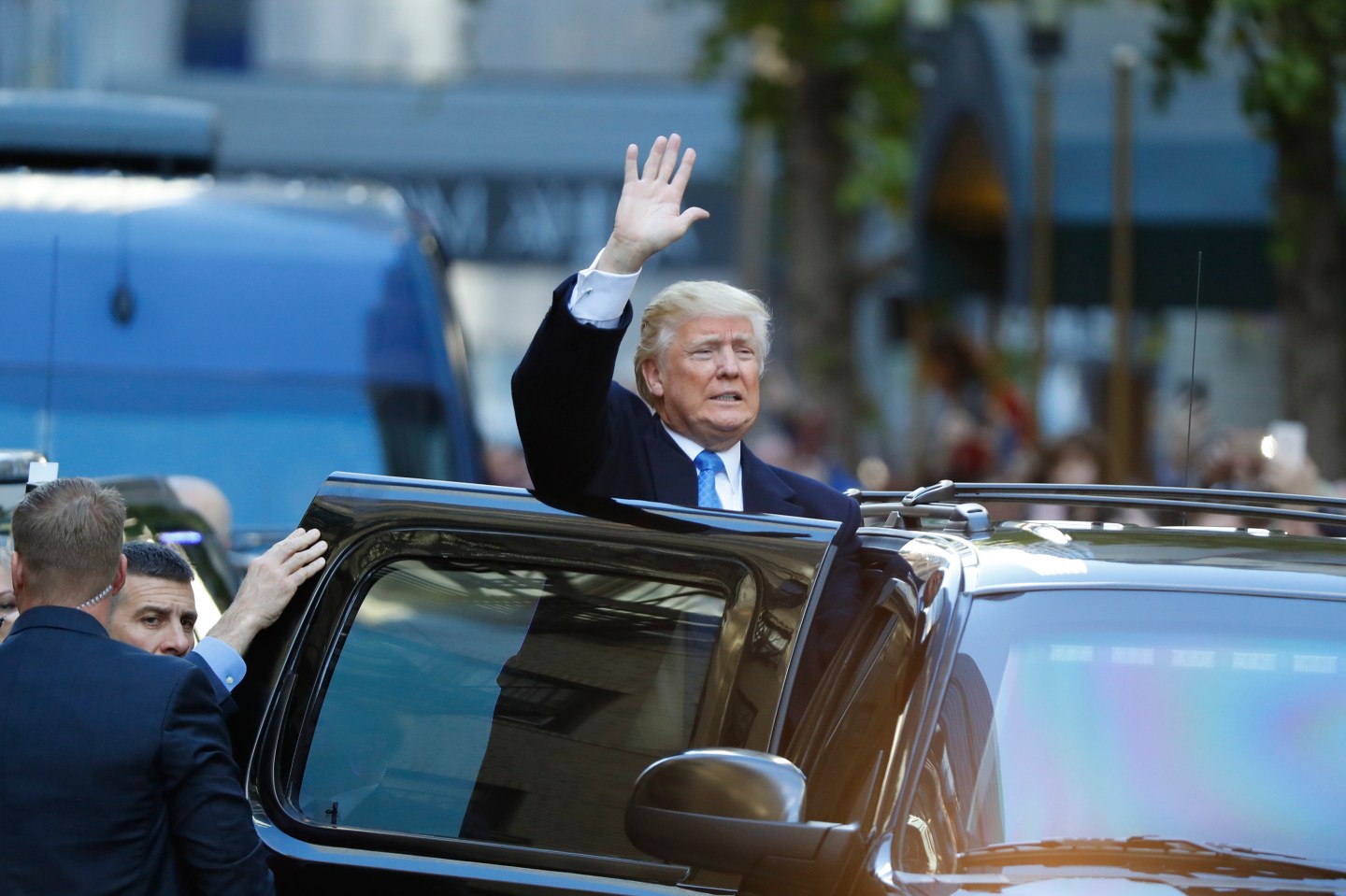 Robert Brooker is as surprised as everyone else about Donald Trump’s upset victory over former Secretary of State Hillary Clinton on Tuesday night. And the chairman and owner of software company WIN-911 Software, based in Austin, says he’s now worried about the future of his 40-employee company.

For the past few years, half of his company’s revenue growth has come from overseas sales, to places including China and Mexico. Now, with the billionaire businessman’s victory, much of that is in question.

“It is very hard for me to separate my feelings as a business person from my feelings as a citizen,” Brooker, a Clinton supporter, says. “On the business side, it seems like there will be so much chaos and uncertainty with a Trump administration, and a majority Republican Congress.”

Defying odds that his populist and frequently fear-mongering campaign could capture the electorate, Trump sailed to a decisive electoral college win yesterday. And in his victory speech, Trump struck a conciliatory note for the often divisive presidential campaign, as he vowed to rebuild the country and renew the American Dream.

“I’ve spent my entire life and business looking at the untapped potential in projects and in people all over the world,” Trump said in his victory speech. “That is now what I want to do for our country.”

Yet business owners have often said they’ve gotten short shrift during a long and bruising election season that has tended to avoid issues, and instead veered toward the sensational.

There’s plenty they care about, ranging from tax and immigration reform, to health care and free trade. And with a Republican majority in Congress, many of Trump’s plans are likely to be passed, political analysts say.

“One of the first things that will happen is the Affordable Care Act will be repealed,” John Hudak, a senior fellow in governance studies at the centrist Brookings Institution, says. “Anyone who thinks otherwise is underestimating the passion among Republicans to get rid of this.”

Here are some of the major economic policies Trump has laid out that affect small business.

Trump has said he plans to repeal the ACA, and let states deal with health-care issues for their residents. That could include changing regulations to let states buy and sell insurance across state lines. He favors giving individual consumers access to federal health savings accounts, and making monthly premium payments fully deductible at tax time. These proposed changes appeal to Kathy Mills Chang, founder and chief executive of KMC University, a healthcare reimbursement and compliance consulting company based in Lone Tree, Colorado. The company has nine full time employees.

“Every day we deal with doctors who are trying to navigate the regulatory waters of the current healthcare system, which is almost impossible because it’s such a moving target,” Mills Chang, a registered Republican who voted for Libertarian candidate Gary Johnson, says. “I believe [Donald Trump] plans to simplify things.”

Donald Trump has said he will slash taxes and compress the tax code to three brackets from its current seven. Under his plan, top earners will pay taxes of 33%, as opposed to the current top individual rate of 39.6%. He’d also decrease corporate taxes to 15 percent. S-Corps and other pass-through entities like LLCs, would also have a top tax rate of 15%. Trump would go easy on companies that have been stashing cash overseas. Owners would be allowed to repatriate earnings, which would be subject to a one-time 10% tax. He would also close inversion loopholes that let corporations defer taxes by banking funds overseas. Instead, companies would pay taxes on income at the time it is earned.

While Brooker, whose company is an S-Corp, would stand to benefit, he’s opposed. “We have a more balanced society where things are today than with the dramatic decrease of taxes proposed by Trump,” Brooker says.

Dean Baker, co-director of the Center for Economic and Policy Research, in Washington, D.C., says Trump’s tax reform will benefit big corporations and the rich more than small businesses.

“There is fairly broad bipartisan support for the idea of lowering the corporate income tax rate and getting rid of most of the loopholes,” Baker says. “The problem has been that all the loopholes have major lobbies. I can envision a scenario in which we get a bill that lowers rates and only gets rid of a few trivial loopholes.”

Trump has said he’d round up and deport the millions of undocumented immigrants in the U.S., which some conservative economic experts have said would said would have catastrophic consequences for the economy and small business, potentially reducing the GDP by 5.7% and costing nearly $1.6 trillion to enforce. Just as controversially, he has said he’d place a ban on Muslims who want to enter the country. He’d also build a nearly 2,000-mile wall along the southern border with Mexico, and try to make Mexico pay for it. He’d also scuttle federal funding to cities, known as sanctuary cities for undocumented aliens, if they don’t comply with new immigration laws.

Says Stan Veuger, a resident scholar and economist at the American Enterprise Institute, a conservative think tank in Washington, D.C., Trump is likely to start by nixing President Obama’s 2014 executive order. The order would provide a path to citizenship for an estimated 7 million undocumented immigrants.

Trump has proposed a moratorium on all new regulations. Small business groups, such as the National Federation of Independent Business, say 45% of business owners consider regulations a very serious business problem today. That is up from 17% in 2001. With that in mind, expect our participation in things like the Paris Agreement, to limit emission of greenhouse gases worldwide, to go out the window, Veuger says.

Trump says he wants to rebuild the U.S.’s manufacturing base. He has consistently taken a protectionist stance that would punish China and Mexico with new tariffs of 45% and 35%, respectively. He’d nix the pending Trans-Pacific partnership, and also potentially roll-back old agreements like NAFTA. He has also suggested he would penalize U.S. companies that move jobs overseas.

Economic experts are dubious about how helpful that would be. “The factories that left will not come back if we repeal NAFTA,” Baker says. “I can imagine him formally withdrawing and then agreeing to a new pact that leaves most of NAFTA in place.”