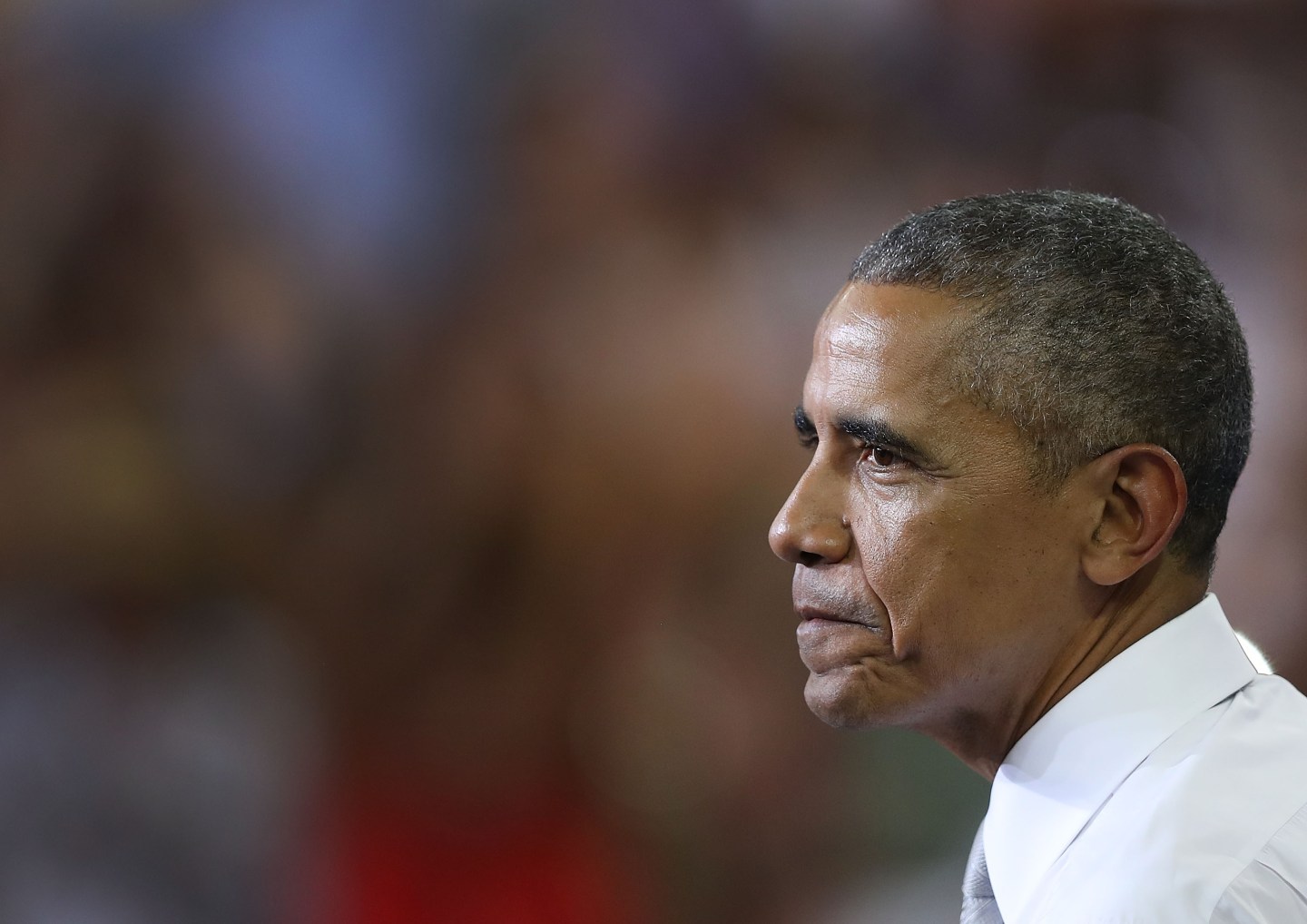 ORLANDO, FL - OCTOBER 28: President Barack Obama speaks as he attends a campaign rally in support of Democratic presidential candidate Hillary Clinton at the University of Central Florida on October 28, 2016 in Orlando, Florida. Election day for the presidential candidates is 10 days away. (Photo by Joe Raedle/Getty Images)
Joe Raedle—Getty Images

At about one-third of U.S. companies—both public and private—when you accept a job offer, you’re asked to sign a non-compete agreement, which bars you from quitting to work for a direct competitor for a particular period of time. That could change if President Obama has it his way. Last month, the president issued a “state call to action” to stop companies and workers from entering non-compete agreements.

This is a bad idea. In states with poorly educated workers who have little or no employment history, non-compete agreements give employers incentives to hire and train unskilled workers, free from the worry that a nearby competitor will swoop in and hire away the best workers shortly after they’ve received the valuable training and work habits provided by their original employer. Hiring unskilled workers without non-compete agreements turns employers who do provide valuable training into suckers.

Moreover, states already have sensible rules that fit the particular needs of their populations. This is an area of law in which it makes sense for different states to experiment with different rules, and for diversity among the states that do enforce reasonable agreements not to compete be not merely tolerated, but applauded.

It is true that non-compete clauses are often used in low-wage jobs, such as those held by fast-food employees and warehouse workers. But what the data do not show is how many fewer workers are hired—how much less training is given in jurisdictions that decline to enforce non-compete agreements.

There is a solid economic reason for this: A worker’s value to his employer increases over time as he develops skills and experience on the job. Even low-skill jobs require some skills and knowledge, particularly as fast food restaurants, warehouses, and other low-skill job venues become more automated. Even truck drivers and Uber drivers learn better work habits, not to mention valuable rush-hour shortcuts on important routes, such as to a local airport or central business district.

In the absence of enforceable covenants not to compete, employers will invest less in on-the-job training, a critical job perk for under-educated workers. If, as the Obama plan envisions, a worker could simply jump ship after a two-week training period for a few cents more an hour or slightly better working conditions, employers would not be able to afford much training.

The Treasury Department has found that jurisdictions with lower-wage workers tend to enforce non-compete clauses. This is sensible, because employers in such states are facing a relatively large supply of untrained workers for the jobs that are available in the jurisdiction. That’s why the wages are low in the first place; it is a simple matter of supply and demand. Enforcing non-compete clauses is necessary to induce employers to take the costly and risky step of hiring untrained workers who must be trained before they can become fully productive.

Some scholars have argued that non-compete agreements cause low wages, and the Obama administration appears to have bought this specious argument lock, stock, and barrel. Though covenants not to compete are correlated with higher unemployment and lower wages, they do not cause unemployment or low wages.

Restricting workers from jumping ship and going to work for a nearby competitor will exert upward pressure on wages, not downward pressure. It simply makes no sense to assert that giving employers broader powers makes them less likely to hire workers. The opposite is true.

As with so many of government’s ideas, state-sponsored efforts to “help” low-wage workers by invalidating agreements not to compete does not provide succor for the poor. It is welfare for the rich. High-paid workers who bring an array of skills and a broad educational background with them to the workplace benefit from being allowed to change jobs freely. Scholars have demonstrated that California’s long-standing refusal to enforce non-compete clauses has boosted the economy, specifically in Silicon Valley, by enabling new startups to attract top engineers and designers from established firms without a legal hassle.

The existing empirical studies focus on executive—not ordinary—workers. But this “evidence” is transposed from highly educated, white-collar workers to everybody else, seemingly without considering how different the markets are for top executive talent and fast food and warehouse workers.

Far from being used to exploit workers, agreements not to compete for unskilled laborers give potential employers stronger incentives to take the risk of hiring and training workers who are unskilled and have no work histories to recommend them. States including Delaware, Colorado, and Texas, for example, severely limit the applicability of covenants not to compete directed at physicians. Apparently motivated by an agreement not to compete at a restaurant chain that prevented employees, including delivery drivers, from working at a competing business within two miles of any of its restaurants, beginning on January 1, 2017, the Illinois Freedom to Work Act will make agreements not to compete for all employees earning less than $13 an hour—or the minimum wage required by applicable federal, state, or local minimum wage law—illegal. While the restaurant had not enforced the agreement not to compete, political points could be scored by restricting workers’ contractual freedom (by declining to enforce agreements not to compete), and so they were. The Illinois statute is so strict that it will prevent an employee from agreeing to refrain working even for a directly competing establishment that is next-door to the business that provided the low-wage worker with her initial job.

Low-wage workers are precisely the group that will benefit from signing agreements not to compete, because they are the ones most in need of the training and life skills that a first job can provide. Thus, while the Illinois legislature did the popular thing, it did not do its low-wage workers any favors.

Covenants not to compete may sometimes be a good idea for some highly skilled executives and tech workers in some situations. But taking this notion and ramming it, unstudied, down the throats of working people is not doing them a favor. In fact, looking at this proposal, one begins to wonder whether all of those folks without college educations who are voting Republican are really as crazy as my liberal colleagues tell me they are.

Mr. Macey is Sam Harris Professor of Corporate Law, Securities Law and Corporate Finance at Yale Law School and a professor in the Yale School of Management.