How the Chicago Cubs’ World Series Hopes Have Slipped Away 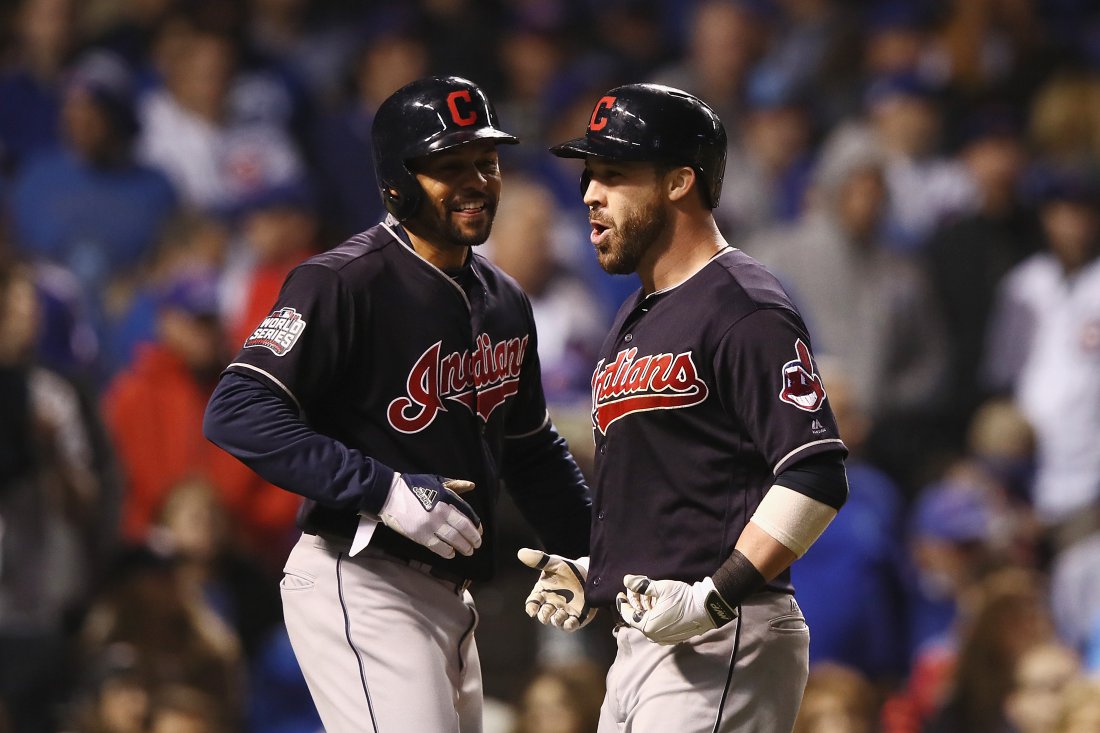 CHICAGO, IL - OCTOBER 29: Coco Crisp #4 (L) and Jason Kipnis #22 of the Cleveland Indians celebrate after Kipnis hit a home run in the seventh inning against the Chicago Cubs in Game Four of the 2016 World Series at Wrigley Field on October 29, 2016 in Chicago, Illinois. (Photo by Ezra Shaw/Getty Images)
Ezra Shaw Getty Images

Linda Medo calls herself a “rookie.” After all, she has only been attending Chicago Cubs games on a regular basis for twenty years now. Many of her fellow Wrigley Field bleacher dwellers have been at it for five or six decades.

Before Game 3 on Friday night, the first World Series game at Wrigley Field since 1945, the Chicago-born Medo was downright giddy, jumping up and down in her seat a half hour before first pitch, shaking her fists. The Cubs lost that one, 1-0, to the Cleveland Indians, giving the Indians a 2-1 series lead. On Saturday night, the Cubs trailed 4-1 in the top of the seventh. The once ecstatic bleacher regulars weren’t making much noise. Then the Indians’ Jason Kipnis—who went to high school some 20 minutes away from Wrigley and grew up a die-hard Cubs fan—ripped a three-run home run into the right field seats, giving his team a 7-1 lead and essentially sealing the Game 4 win. Cleveland now leads the series 3-1. The Cubs sit one game from elimination.

“I didn’t see it,” Medo said to no one in particular after Kipnis’ blast. “It didn’t happen.”

It did. Chicago waited 71 years for this? Two straight home losses in the World Series, in which the team’s vaunted offense performed like double-A players? The team won 103 regular season games, best in the majors, and rocked Chicago just a week ago by clinching its first pennant in more than seven decades. But Wrigley Field is still waiting for its first World Series win since the Truman administration. “We needed today,” says John Stutz, 46, while leaving Wrigley before the final out. Might as well beat the stampede out of the stadium, since a Cubs loss was inevitable. “I thought we had today. Right now, all the air has gone out of the balloon. It’s just a giant kick in the stomach.”

Stutz, a lifelong Cubs fan, runs a youth baseball academy in the Chicago suburbs. One of his star pupils: Kipnis, the Windy City’s hometown tormentor.

Cleveland is relishing its role as spoiler. Sure, the Indians haven’t won a World Series since 1948. But Americans have rallied around the Cubs: 1908, the last year the Cubs took the title, is implanted in the the national psyche. “The pressure’s all on them,” says Indians outfielder Rajai Davis. Following Cleveland’s 1-0 win on Friday night, in which four pitchers—starter Josh Tomlin, and relievers Andrew Miller, Bryan Shaw, and Cody Allen—combined to befuddle the Cubs, the Indians returned with their ace, Corey Kluber, on Saturday. Kluber led Cleveland to a 6-0 shoutout victory in Game 1.

Kluber gave up a run in the first, but the Indians quickly bounced back an inning later: Carlos Santana hit a solo shot, then Kluber helped himself with an RBI infield single that gave Cleveland a 2-1 edge. Chicago couldn’t catch up with Kluber. Since injuries have decimated Cleveland’s starting staff, Kluber, winner of the 2014 Cy Young award—and a favorite for his second Cy Young this season — was throwing on only three days rest. “I don’t think people appreciate how hard it is to do that,” says Kipnis. “He reminded everyone that he’s still Corey Kluber, that he still has that Cy Young.”

With his shot in the seventh, Kipnis became the first visiting player to hit a three-run home run in Wrigley since Babe Ruth in 1932. “I never thought I’d be in the same sentence as that guy,” Kipnis said afterwards.

For many at Wrigley, hope’s fading all too fast. The Cubs, naturally, are trying to stay upbeat. Jon Lester, one of the best pitchers in all of baseball, will start Game 5 on Sunday. Jake Arietta, last year’s Cy Young award winner, and winner of Game 2 of this year’s World Series, would throw in a Game 6. And if the Series somehow reached a deciding Game 7 in Cleveland on Wednesday, Kyle Hendricks, who had the lowest ERA in the majors this year and has surrendered one run in his past three postseason starts, would start for Chicago.

“There’s never a time I go out on the field with this group that I don’t feel confident,” says Chicago Cubs catcher David Ross, who will be behind the plate for his good friend Lester in Game 5. “We’re in the World Series, what better place to be, right? There are lot worse things. There are a lot of guys at home wishing they were down 3-1, going into a World Series game in Wrigley Field.”

“All we have to do is just chill, and have a little more fun,” says Miguel Montero, Ross’ fellow Cubs catcher. “That’s all.”

Medo, the bleacher “rookie,” hasn’t lost all faith. “You have to enjoy what you have,” says Medo, an inventory manger who now lives in northern New Jersey. “I’m still glad I came out for this. But everyone back in the office knows that if the Cubs lose, I won’t talk to them for a month.”