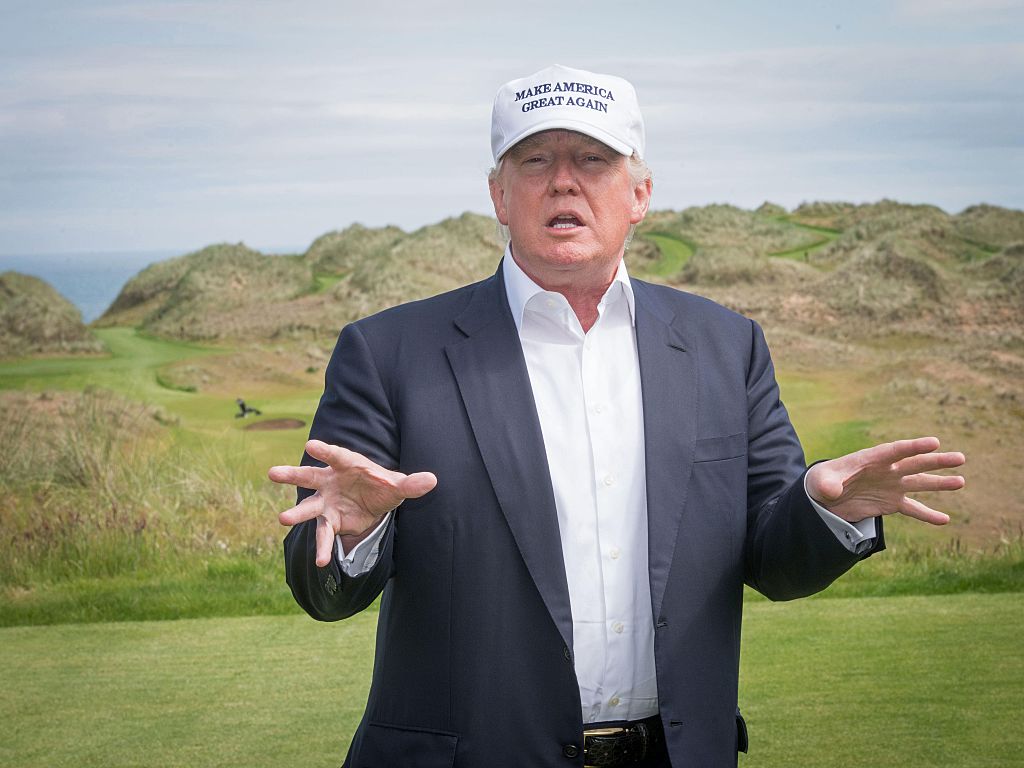 With less than two weeks to go before the election, a British documentary director wants to show America the real Donald Trump.

On Friday, director Anthony Baxter released his latest film, You’ve Been Trumped Too, a sequel to an earlier film that aired on the BBC in 2012. Both films deal with the GOP nominee’s controversial development of a luxury golf course on the east coast of Scotland, in Aberdeen, and what has become a years-long battle between the real estate mogul and a group of local residents.

Baxter’s first film (You’ve Been Trumped) introduced the world to Michael Forbes, a part-time fisherman, and his 92-year-old mother, Molly, who are neighbors of the Trump International golf course in Scotland. The Forbes family (no relation to Steve Forbes, the American publishing scion) refused to sell their property to Trump and vehemently opposed the construction of the course. Trump retaliated by calling their home a “pigsty.”

Now, Baxter claims in his latest doc that the Forbes have been without working water for several years after the Trump Organization accidentally shut it off during the construction of Trump’s golf course.

Watch a trailer for the film here:

Baxter’s doc You’ve Been Trumped Too has a limited release in Los Angeles and New York, but the director launched a Kickstarter campaign to finance the release of the film in a digital format ahead of the election.

Baxter spoke with Fortune earlier this week about his new documentary, Trump’s ongoing battle with local residents in Scotland, and his hopes to reach a wide audience ahead of Election Day. The following conversation has been condensed and edited for clarity.

Why was it so important to you to bring this movie to America?

Trump was saying that he was going to champion the ordinary people in America, and here he was essentially trampling on the lives of ordinary people here in Scotland. He came to Scotland promising 6,000 jobs. On the day he announced he was running as a presidential candidate, he said “I will be the greatest jobs president that God has ever created.” The facts speak for themselves in terms of what he says and what he does. Because, in Scotland he’s created just 95 jobs at his golf course in Aberdeenshire, not the 6,000 that were promised.

At the same time, he’s trashed a very unique, environmentally sensitive stretch of coastline, and the golf course remains not the economic boon that was ever envisaged by Trump—and, of course, he managed to woo the Scottish government to allow that to happen.

What was the most surprising thing you learned during the making of the sequel?

Most remarkably, I suppose, is when I discovered that Molly Forbes was still without a working water supply after the Trump Organization had first cut it off, back in 2010, accidentally, while they were building the golf course. And, they said they were going to restore the Forbes’ water supply and make it the best they’d ever had. And, essentially, nothing was ever really done.

[Forbes] has had to take water from a nearby stream in a bucket, cart it up in a wheelbarrow, and wash and bathe with bucket water because Donald Trump has failed to essentially put right something that was promised back in 2010. And, I thought that was utterly appalling and I felt that was a story that ordinary Americans should see and know about.

Trump has sold his candidacy in part on his business experience. But there have also been stories about contractors who alleged he stiffed them. This film seems to fit into this idea that he’s not the businessman he claims.

Yeah, I think nowhere in the world does a story capture [as much as this one] the exact reality of what Trump does, as opposed to what he says. Not only has he failed on the economic promises he set out in 2008 when he came to Scotland, but he has also made the lives of ordinary people hell.

And, the idea that people would be casting their votes without knowing that, and knowing how he has treated a 92-year-old woman who he says reminds him of his mother…It’s such a telling example; we really feel it’s a story that needs to be taken in by as many people as we can bring it to before Election Day.

How do people in Scotland now view Trump?

If you were to do a poll now of what people in Scotland think of Trump, I think it would be something like 98% would be disapproving of him. There are always officials, particularly in Aberdeen, who have been wooed by these promises of his and still remain convinced that he’s going to deliver on them. But, [the fact] that Michael Forbes was voted “Scotsman of the Year” in a national poll, would suggest that nobody has any time for Donald Trump anymore.

They’ve seen through his false promises because they can see that, not only has he failed to deliver on the economics of it all, but he’s also bullied and harassed residents in a way that just doesn’t go down well in Scotland at all. So, I don’t think he’s welcome at all, given the results of the petition that was held a year ago, or so, to ban him from the U.K. on hate speech grounds.

Trump tweeted some insults, calling you a “stupid fool,” after your first documentary a few years ago. He also claimed the controversy improved business at his golf course. Looking back, what do you think about those comments?

It’s nonsense, of course. Because, if you actually go to the Trump golf website and try to book a game tomorrow, you’ll see there’s a tee-off time just about every single slot available. It isn’t successful. It’s losing millions of pounds, according to the latest figures. His operation in Scotland is a big loss-maker, it failed to deliver on the jobs promised. It’s not a success.

Have you heard anything from Trump about your latest film’s release?

No, I haven’t at all. They put out a statement to a couple of newspapers about the film, and they said they have no interest in seeing it.

Have you faced any legal action from him?

No. He threatened the BBC with legal action if they showed You’ve Been Trumped, but they did show it and he didn’t follow through on any legal action at all.

What are your release plans for You’ve Been Trumped Too?

We’ll run it here in New York as long as we can, and as long as people are willing to come see it, obviously. We want to roll it out to as many theaters as we can throughout the country and have as many free screenings as we can. We want to bring it digitally to people so as many Americans as possible can see it ahead of the election on the eighth of November.

Fortune reached out to a Trump campaign spokesperson about Baxter’s new film and we will update this article with any comment or response.