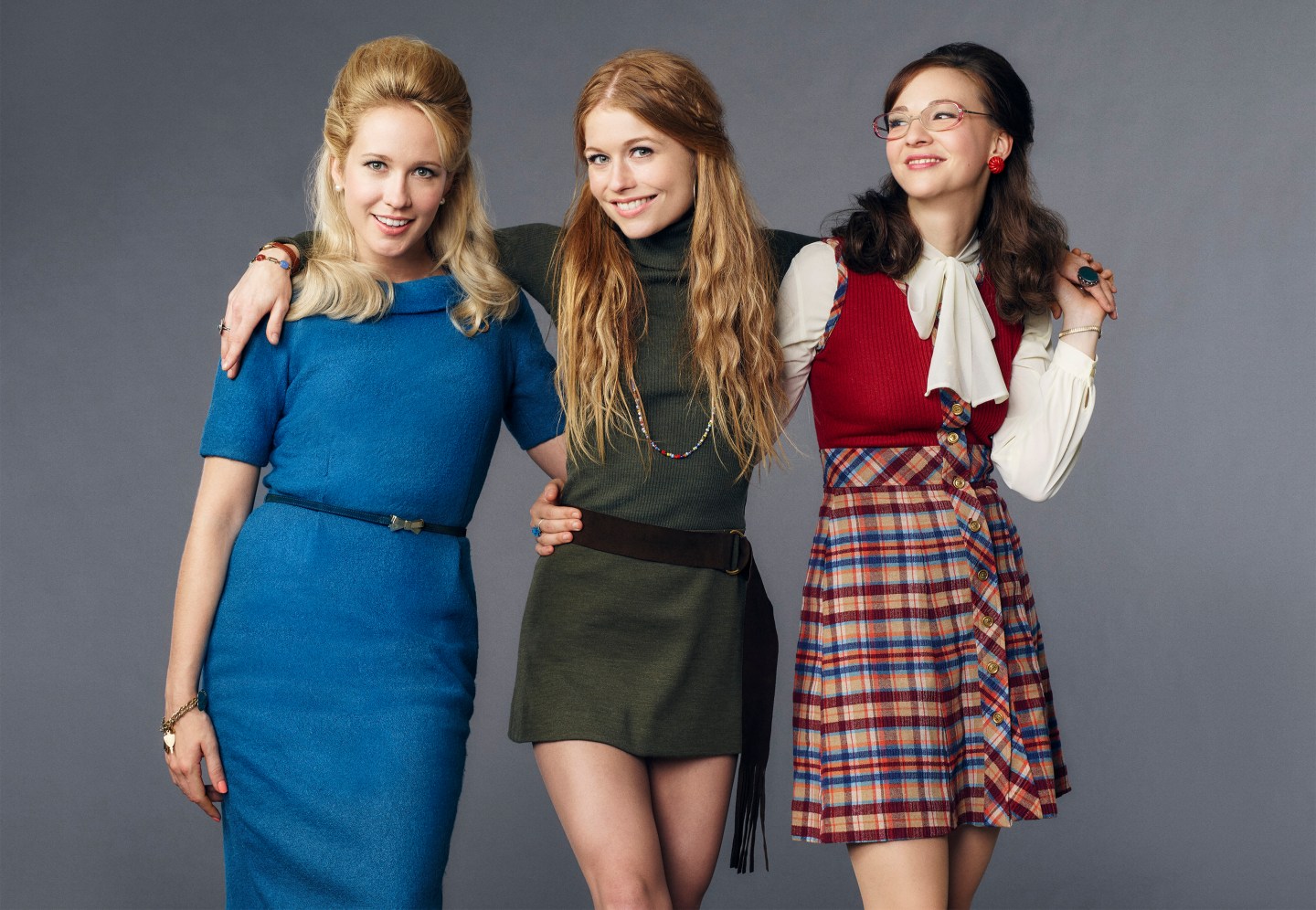 In the late 1960s, only 53% of Americans said they’d vote for a woman for president if she were “qualified in every other respect.” There was no concept of “sexual harassment,” and many employers openly advertised jobs as for men only.

Amazon’s new series, Good Girls Revolt, begins just at the end of this “Mad Men” era, in 1969. But unlike AMC’s hit show, Good Girls Revolt tells the story from the point of view of the women, focusing on a group of bright, young journalists as they have a feminist awakening and then push for change at work and at home.

The series is based on a non-fiction book of the same name. That book, by Lynn Povich, chronicled how a group of women, relegated to dead-end researcher jobs at Newsweek, organized and announced the first female class-action lawsuit alleging employment discrimination in 1970–the same day Newsweek’s cover story on “women’s lib” hit the stands. Women at other media organizations were inspired to follow suit. ACLU attorney Eleanor Norton Holmes was their lawyer (she later became the first female chair of the Equal Employment Opportunity Commission).

Starring Anna Camp (Pitch Perfect), Erin Darke (Still Alice), and Genevieve Angelson (House of Lies), the show depicts a world where unwanted sexual advances and office trysts are commonplace, and women have to grapple with how to be ambitious in a workplace made for men. At a time when Donald Trump’s hot-mic comments about groping women have been seared into the national consciousness, the lack of women in Silicon Valley and pay inequity in Hollywood seem like intractable problems, and Fox News’s Roger Ailes resigned amid sexual harassment claims, Good Girls Revolt is attracting buzz for seeming weirdly—and depressingly—relevant.

“It is surreal, how far we’ve come, yet how little has changed, and how difficult it is for things to change,” says Dana Calvo, the show’s creator. She added that in 2002, when she was a Los Angeles Times reporter, her bosses urged her to quit so that she could follow her then-boyfriend, now husband, to his new posting for the paper.

Povich’s book was published in 2013, and other producers had tried unsuccessfully to get the rights to the material. Lynda Obst, Good Girls Revolt’s executive producer, said she ultimately won over Povich because she was an acquaintance, had also been a journalist in the 1970s, and promised to fictionalize certain characters. (Disclosure: Lynn Povich was my boss in the early 1990s when she was editor of Working Woman magazine.)

The Amazon series gives a prominent role to writer/director Nora Ephron (in reality, Ephron worked only briefly at Newsweek and played no role in the suit) and Eleanor Norton Holmes. The main protagonists, all fictionalized, are depicted as sexy, smart women who just want to have the same opportunities as the men they love.

Obst said that was a goal of hers—to puncture the myth that feminists are angry, man-hating women—so that more of them adopt the cause of feminism. In 2016, when the first woman running for president on a major party ticket is called a “nasty woman”, as Clinton was by Trump, that might be as timely a message as ever. “I wanted people to see the sexy fun version of feminism that we lived then [in the 1970s],” Obst says. “My idea was that if [people] saw what a liberated feminism was, they’d realize that feminism was just the inability to do what we wanted.”

Still, the show may be a bit out of step when it comes to reaching millennials, especially. Good Girls Revolt has one person of color on the writing staff, and the first season of the show gives very little airtime to the black characters. In one particularly tone-deaf moment in the show, the Eleanor Norton Holmes’ character browbeats a young black woman into joining the class-action lawsuit, telling her that “all second class” citizens need to stand together. Is this a message that will resonate with Millennials, who have seen mainstream white feminists as unwilling to acknowledge the need for intersectionality, and the interplay of race and gender? (Then again, that may be asking a lot for a show about the 60s and 70s.)

Either way, the series, with its laser focus on a late 60s, early 70s workplace run for and by men, puts a smart spotlight how much further we have to go. As Calvo put it, “Locker room talk happens because there are no women in the room. Let’s open the doors and let the women in.”