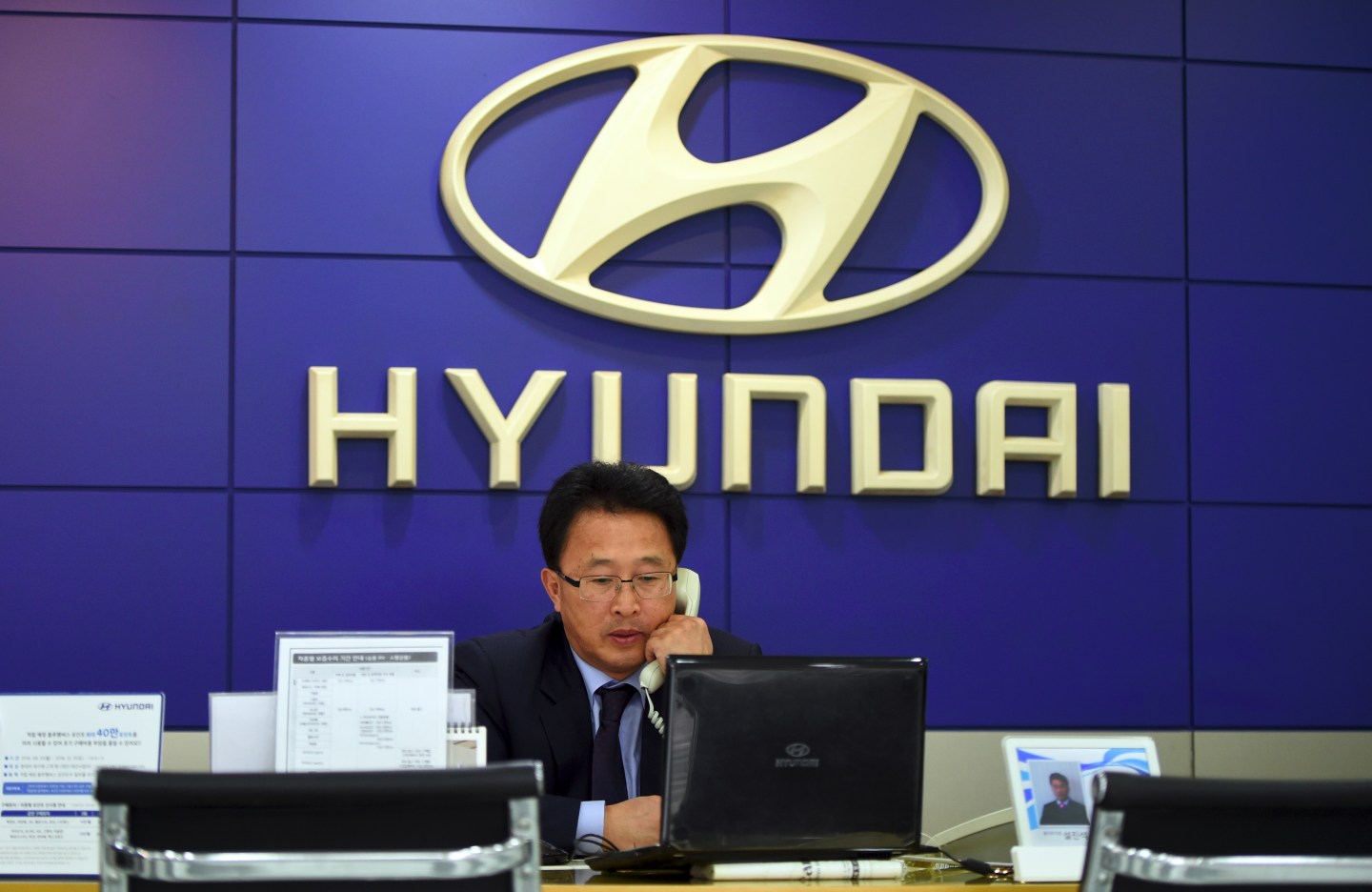 A car salesman speaks on the phone at a dealership of Hyundai Motor in Seoul on October 26, 2016. South Korea's Hyundai Motor on October 26 announced a sharp fall in profits for a third quarter, hit by lengthy industrial action that also took a toll on the national economy. / AFP / JUNG YEON-JE (Photo credit should read JUNG YEON-JE/AFP/Getty Images)
Photograph by Jung Yeon-JE/AFP/Getty Images

Hyundai Motor’s quarterly net profit skidded to its lowest level in more than four years on a protracted strike at home and weakness in emerging markets, and it warned it may miss its sales targets for a second straight year.

Falling far short of consensus estimates, the results come just a day after the South Korean automaker said about 1,000 executives will take a 10% pay cut amid a severe slump that also reflects slower growth in more developed markets.

Hyundai also replaced the heads of both its South Korean and China operations this month, after market share losses in both key markets.

Its woes have only exacerbated pain for South Korea, which has seen its economy take a hit from a major phone recall crisis at Samsung Electronics (SSNLF) and the collapse of Hanjin Shipping.

Net profit at the carmaker fell 10% to 1.06 trillion won ($935 million) for the third quarter ended September, down for an 11th consecutive quarter. It was far below a consensus forecast of 1.3 trillion won derived from 19 analysts polled by Reuters.

Earnings fell even though the comparison period a year earlier was weak – in third-quarter 2015, profit slid nearly a quarter on slack China sales.

The firm said global shipments dropped 3% to 1.085 million vehicles for the third quarter from the same period a year earlier, also squeezed by weak demand at home after tax breaks on new car purchases expired in June.

“The uncertainty surrounding the automotive industry is expected to persist for the time being because of a slowdown in advanced markets and a slump in emerging countries,” Hyundai Motor said in a statement.

The automaker’s domestic factories were hit by sporadic strike action from July to September in what was its worst-ever labor dispute.

Management and union leaders reached a deal to resolve the issue earlier this month – but not before Hyundai lost output of about 140,000 vehicles, worth around 3 trillion won in potential sales.

Hyundai shares ended down 0.4% after the earnings announcement, versus a 1.1% fall for the broader market.