What to Know About President Obama’s Half-Brother, Malik Obama, Who Is Attending the Presidential Debate 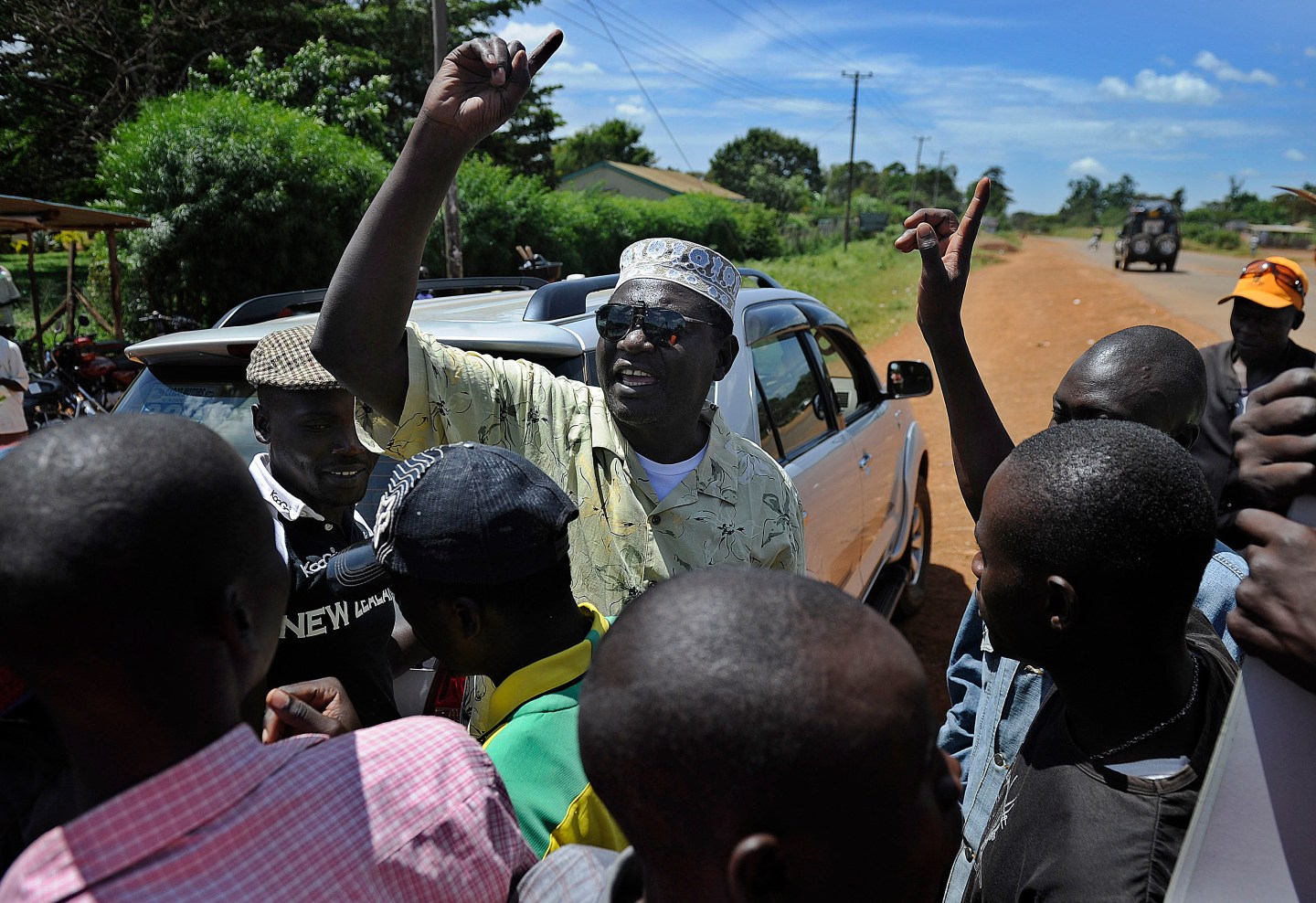 President Barack Obama's Kenyan half brother, Malik Obama (C) rallies supporters on January 16, 2013 near Nyang'oma in Kogelo, now renowned as the Obama's traditional home. Malik has launched his own political career by announcing his intention to run for a Kenyan gubernatorial seat in the upcoming March 4 general elections. Malik, 54, who shares a father with the US president told AFP that the achievements of his more famous half brother have "inspired and challenged" him to get into active politics in his homeland. The trained economist said he is the right candidate to deal with the "endless cycle of poverty and unemployment that bedevils my people." . AFP PHOTO/Tony KARUMBA (Photo credit should read TONY KARUMBA/AFP/Getty Images)
TONY KARUMBA—AFP/Getty Images

President Barack Obama’s half-brother will be in the audience at the third and final presidential debate on Wednesday, but he’ll be there to support Donald Trump—someone with whom the President notably disagrees.

Malik Obama is among the special guests invited to the Las Vegas debate by the Trump campaign.

Here are some key things to know about him:

He is voting for Donald Trump

A U.S. citizen who was born in Kenya, Malik Obama is a Republican and intends to cast his vote for Trump. He announced the decision in July in an interview with the New York Post.

“I like Donald Trump because he speaks from the heart,” he told the Post. “Make America Great Again is a great slogan. I would like to meet him.”

He cited opposition to same-sex marriage, disappointment in his brother’s presidency and his friendship with former Libyan leader Muammar Gaddafi as reasons he supports Trump.

“I still feel that getting rid of [Gaddafi] didn’t make things any better in Libya,” he said. “My brother and the Secretary of State disappointed me in that regard.”

He is a Muslim

“I’m a Muslim, of course, but you can’t have people going around just shooting people and killing people just in the name of Islam,” he told Reuters in July.

His relationship with President Obama has frayed

While Malik Obama originally celebrated his brother’s election in 2008, the two are no longer on the best of terms. He was the best man at Barack Obama’s wedding, and the President returned the favor at one of Malik Obama’s weddings, the Washington Post reported.

Their relationship has since soured. In the interview with the New York Post, Malik Obama said he had wanted the President to do more for the foundation that Malik set up in their father’s name.

“My brother didn’t help me at all,” said Obama. “He wanted me to shut it down when I set it up. He hasn’t supported me at all.”

He added, “Honestly, I’ll be happy when my brother is out of office, and I will finally be out of the limelight and be able to live like a human being.”

He ran unsuccessfully for elected office

Malik Obama ran for governor in the county of Siaya in Kenya in 2013.

At the time, he told GQ that he and Barack Obama shared leadership abilities and other qualities. “It’s all in the genes,” he said.