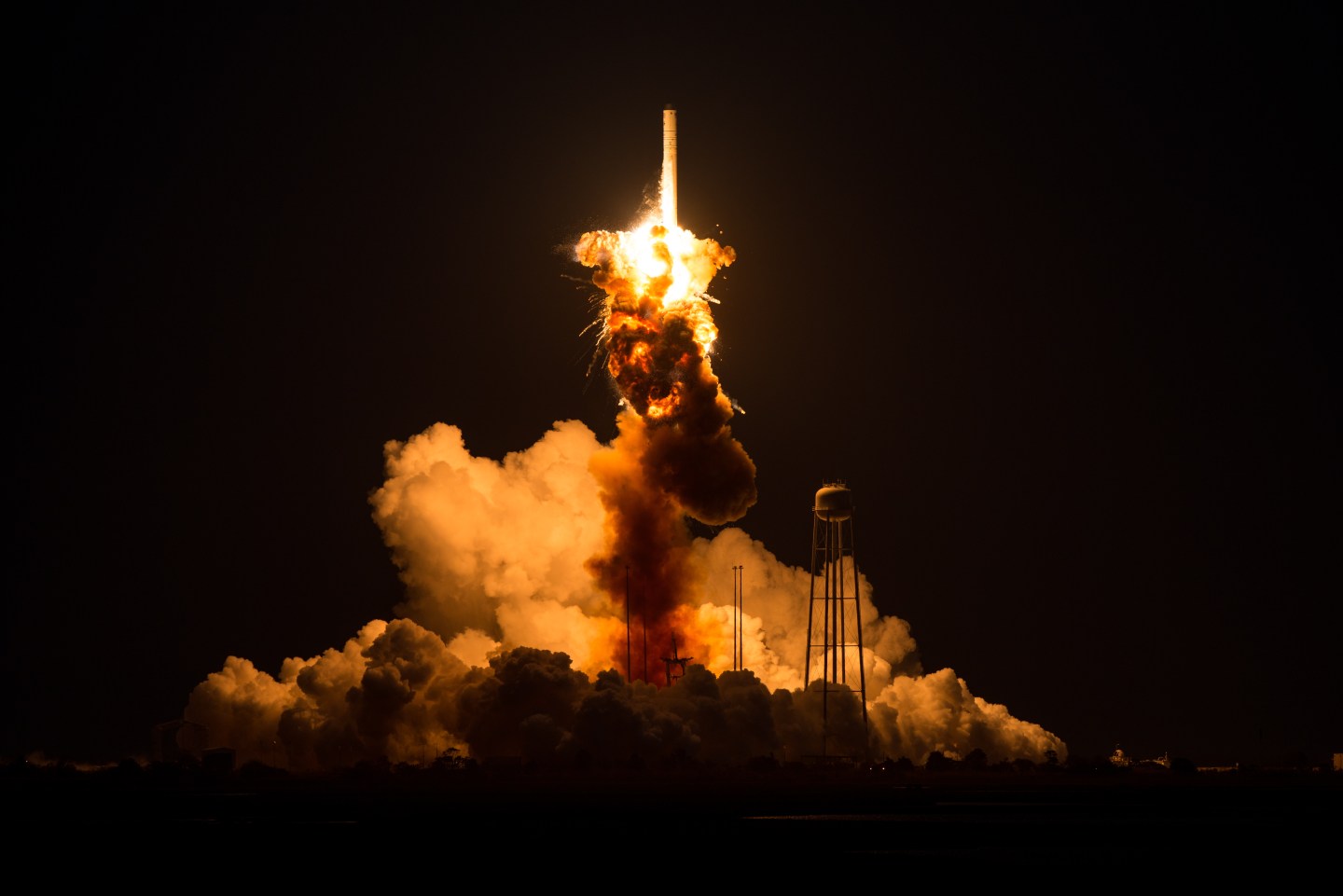 WALLOPS ISLAND, VA - OCTOBER 28: In this handout provided by National Aeronautics and Space Administration (NASA), The Orbital Sciences Corporation Antares rocket, with the Cygnus spacecraft onboard suffers a catastrophic anomaly moments after launch from the Mid-Atlantic Regional Spaceport Pad 0A at NASA Wallops Flight Facility on October 28, 2014 on Wallops Island, Virginia. William Gerstenmaier, associate administrator of NASA's Human Exploration and Operations Mission Directorate and Michael Suffredini, NASA's International Space Station Program Manager also participated in the press conference via phone. Cygnus was on its way to rendezvous with the space station. The Antares rocket lifted off to start its third resupply mission to the International Space Station, but suffered a catastrophic anomaly shortly after lift off at 6:22 p.m. EDT. (Photo by Joel Kowsky/NASA via Getty Images)
Photograph by Joel Kowsky — NASA/Getty Images

(Reuters) – An unmanned Antares rocket owned by Orbital blasted off from Virginia on Monday with a cargo ship for the International Space Station, marking the booster’s return to flight two years after a previous version exploded during liftoff.

The 14-story-tall rocket, powered by a pair of new Russian-made engines, blasted off from Wallops Island, Virginia, at 7:45 p.m. EDT, a NASA TV broadcast showed. Launch was delayed five minutes to resolve a minor glitch with the rocket, according to NASA commentator Brandi Dean.

The rocket carried a Cygnus capsule loaded with 5,290 pounds of food, supplies, equipment and science experiments for the space station, a $100 billion laboratory in orbit about 250 miles above Earth.

The capsule is expected to reach the station on Sunday after lingering several days in orbit to allow time for a Russian Soyuz capsule carrying three new crew members to reach the outpost on Friday. The Soyuz is slated to launch Wednesday from the Baikonur Cosmodrome in Kazakhstan.

The last Antares launch, on Oct. 28, 2014, ended in disaster a few seconds after liftoff due to a problem with the booster’s refurbished, Soviet-era engines. After the accident, Orbital sped up plans to replace the motors.

During the downtime, Orbital bought rides for two Cygnus cargo ships aboard Atlas rockets, built and flown by United Launch Alliance, a partnership of Lockheed Martin and Boeing.

Orbital conducted a 30-second engine test firing of the Antares at the Virginia launch pad on May 31, but had never flown the refurbished rocket before Monday.

For more about space flight, watch:

The mission became more crucial for the U.S. space agency after a Sept. 1 accident destroyed a Falcon 9 rocket operated by Elon Musk’s SpaceX and a $200 million Israeli communications satellite.

The accident, which occurred while the rocket was being fueled for a routine prelaunch test, has temporarily grounded SpaceX, the only company apart from Orbital currently contracted by NASA to fly cargo to the space station.

Private contractors for the cargo runs became necessary following the retirement of the space shuttles in 2011.

Orbital is counting on a smooth Antares launch to help attract other customers for the rocket besides NASA.