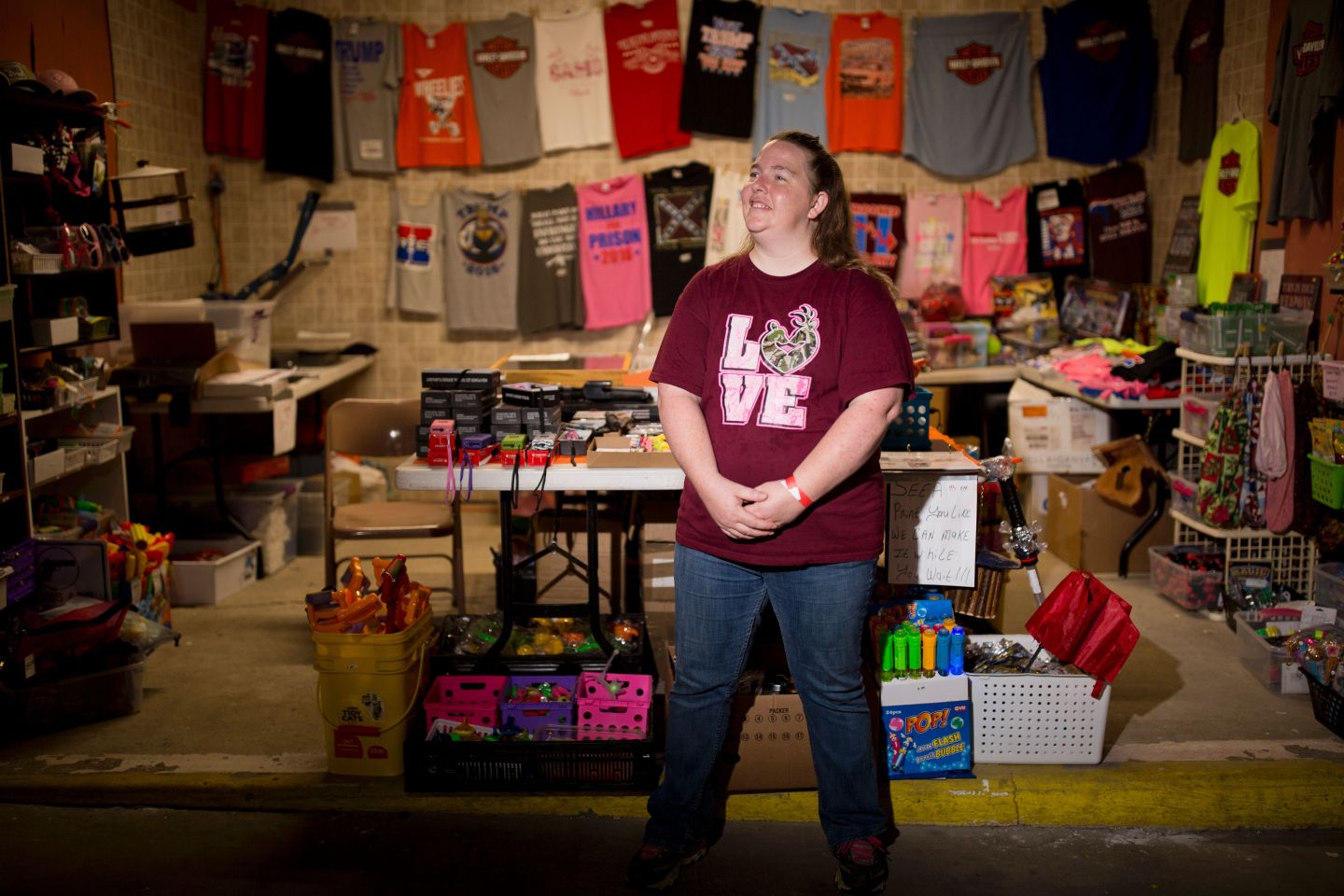 Julia Fields, senior services caregiver, poses for a portrait at the Cambria County Fair September 8, 2016, in Ebensburg, Pennsylvania.Fields' husband, a coal truck driver, has seen his compensation fall more than 75 percent in recent years. The White House race could be decided in the Rust Belt -- a vast, decaying former industrial powerhouse in the US Midwest and Northeast where Hillary Clinton and Donald Trump are battling for the support of working class white voters. / AFP / DOMINICK REUTER (Photo credit should read DOMINICK REUTER/AFP/Getty Images)
DOMINICK REUTER AFP/Getty Images

Kathryn Doherty would never date the likes of Donald Trump and jokes that if her daughter did, she’d send her to a convent. But he’ll get the 76-year-old retiree’s vote for president.

“Well I’m displeased, terribly, and I’m certainly not in love with his personality,” said Doherty, who lives in Yardley, Pennsylvania. “But I think he would do a good job for the country. And quite honestly, Hillary’s stolen so much, taken so much, lied so much, cheated so much, I can’t have that.”

Here in Pennsylvania’s battleground counties—and in nearby coal country, the heart of Trumpland—potential voters in this crucial state are grappling with new waves of incriminating information, including allegations of sexual assault against Trump and new hacked emails from his rival, Hillary Clinton.

As they weigh two already historically unpopular candidates, many see the election as a grim choice. But interviews with more than two dozen voters in the state also suggest that many even lukewarm Trump supporters are standing by their candidate, despite assumptions he’s in freefall.

Speaking over soup, Doherty said she doesn’t like Trump’s talk about women, as captured in a 2005 video in which he bragged about assaulting them.

“Believe me, I would never date anybody like him,” she said. “And if someone like that showed up at my house to date my daughter,” she cracked, “I’d have to send her to a convent.”

But she and her husband, Len, both registered Republicans, are willing to look past Trump’s flaws because they trust the outsider businessman more than Clinton and agree with him on issues, like the direction of the Supreme Court.

“Of course I wish there were a better choice,” said Doherty. “But there’s not. You deal with what you get.”

It was a feeing echoed by Eleanor Reigel, an independent contractor for a cosmetics company who is not registered with a party. Shopping at a Walgreen’s in nearby Levittown, Reigel expressed disappointment with Trump’s words but says she’ll probably vote for him.

“I’m a woman,” she said. “I was involved in Title IX,” the landmark law prohibiting discrimination against women in education programs or activities getting federal aid. “But I have to look at a bigger picture.”

As a businesswoman, Reigel said, she sides with Trump on issues like tax policy. “You can’t recover character, but oh my gosh, I have to think about where are we going with our country.”

In nearby Wilkes-Barre, where Trump-Pence lawn signs now decorate residential streets alongside jack-o’-lanterns, support for Trump is even stronger. Even outside his fervent rallies, voters repeatedly dismissed the video and assault allegations as a coordinated media assault in cahoots with the Clinton campaign.

“He talks like we think,” said Kathy Baxter, 76, a lifelong Democrat who lives in nearby White Haven and changed her party registration so she could vote for Trump in the GOP primary.

Baxter, who serves as a caretaker for her handicapped daughter, dismissed the hubbub over the video remarks as “silly” considering how much is at stake.

“Every guy says that, as far as I know, you know what I mean?” she asked. “That’s their nature. They talk like that.” As for Clinton, she said: “The lying and the emails and the everything — that should be brought up more than somebody saying something like he said.”

Many here are especially eager for change, like Dave Johnson, 48, of Sterling, Pennsylvania. Johnson used to work as a car salesman, but switched to the insurance industry because business was so bad. Yet his company dropped his health insurance because of costs.

“Even in the insurance industry, I can’t get insurance,” he quipped, blaming President Obama’s health care overhaul.

Johnson, a Democrat since high school, changed his party registration about a month ago because of Trump. He also dismissed the groping allegations, noting that Trump has denied them, and says he believes that Trump is the best person to try to turn a broken, dispirited country around.

“It’s a mess,” he said. “I’m enthusiastic for a change. I don’t think we need any more elitist politician.”

Still others remain paralyzed by indecision with just over three weeks to go before Election Day.

Disillusionment, USA, Where Voters Are Just Hoping for Change

Republican Anne Snyder, a nurse in Sugarloaf Township, says she’s considering not voting for the first time because she just can’t stomach the candidates.

“I don’t know what I’m going to do,” said Snyder, 63. “I really think I cannot in good conscience vote for Trump, but I’m not a Hillary supporter either.”

And for some, the latest revelations have indeed been the final straw.

Robert Henson had been planning to cross party lines to vote for Donald Trump until he saw that 2005 tape of Trump bragging about groping women.

“I watched it a couple times, ’cause I couldn’t believe he’d said things like that,” said Henson, of Pittston, Pennsylvania. “You know, especially a rich person like that, somebody in the public eye. And he’s got daughters.” The 54-year old father and retired retail manager had had enough.