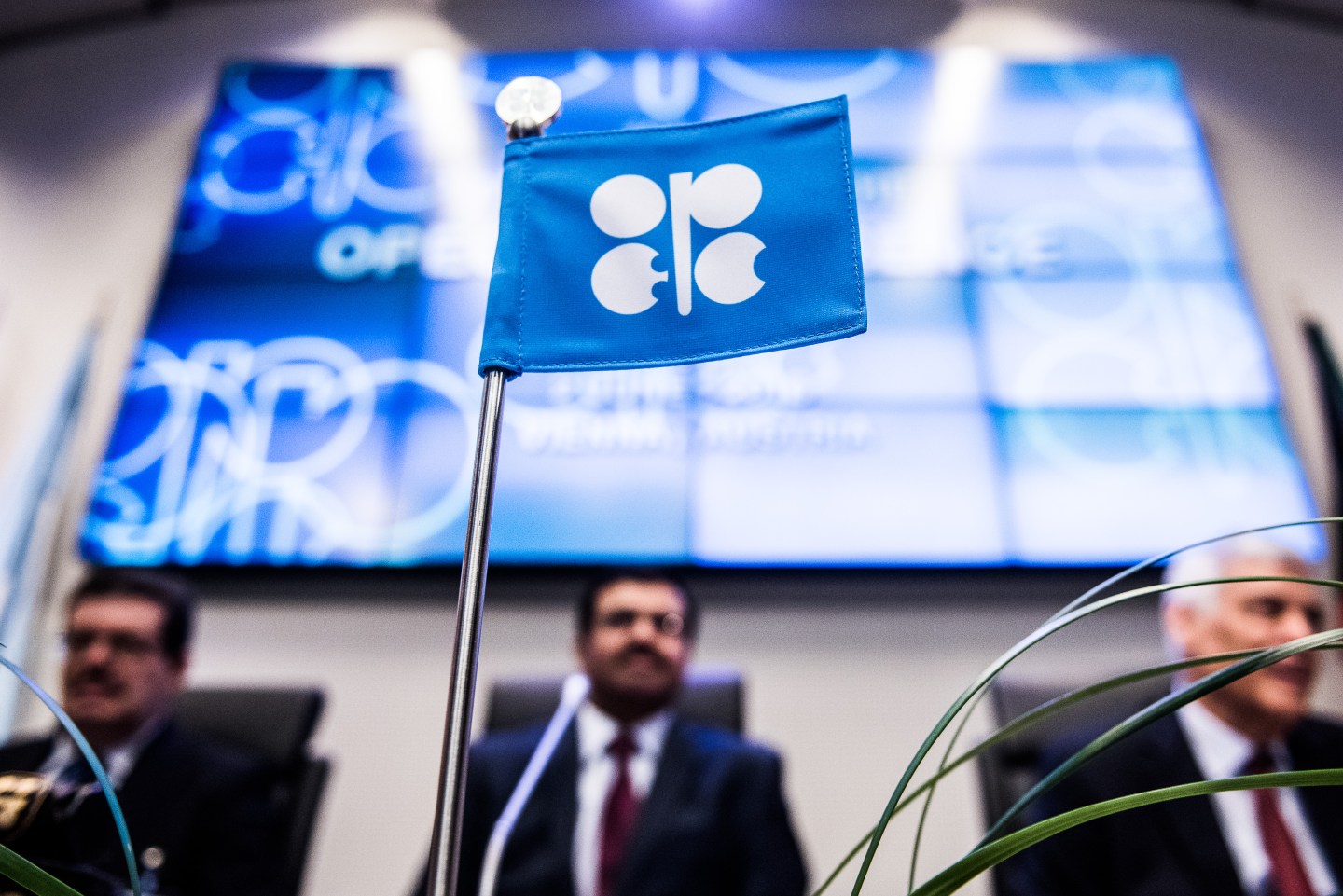 An OPEC flag sits on a table ahead of the 169th Organization of Petroleum Exporting Countries (OPEC) meeting in Vienna, Austria, on Thursday, June 2, 2016. Saudi Arabia is ready to consider a surprise deal with fellow OPEC members, attempting to mend divisions that had grown so wide many dubbed the group as good as dead. Photographer: Akos Stiller/Bloomberg via Getty Images
Photograph by Akos Stiller—Bloomberg via Getty Images

During its heyday in the mid-1970s, OPEC supplied nearly 50% of the global oil market. In August of this year, it produced 33.47 million barrels of oil per day—its highest ever—according to the International Energy Agency. But because of the substantial growth in global oil demand since that time, this record output only amounted to slightly more than a 30% market share. This fact and several others explains why OPEC’s recent proposal to reduce its production by 700,000 barrels per day in an attempt to raise oil prices is highly unlikely to be successful under current market conditions.

Economic theory suggests that the higher a cartel’s market share, the greater its ability to control the market price. OPEC’s current market share implies significantly less ability for even a well-organized cartel to increase prices. But OPEC is not a well-organized cartel. Since the first Arab Oil Embargo in 1973, the cartel has continually struggled to prevent member countries from producing more oil than the amounts agreed upon the during cartel members’ periodic meetings. Saudi Arabia, the cartel’s largest member, usually responded to output increases by other OPEC member countries by producing less oil in order to maintain higher prices. However, as more member countries exceeded their cartel allocations, Saudi Arabia eventually gave up and either raised or maintained production, which in turn caused prices to fall.

The current level of oil prices has made it even more challenging for OPEC members to maintain their cartel output levels. All of the Middle Eastern member countries—Saudi Arabia, Iran, Iraq, Kuwait, United Arab Emirates, and Qatar—fund virtually all of their government spending from oil sales. And they’ve each set their spending levels based on an assumed price of oil that is significantly higher than the current price of $50 per barrel. At current oil prices, these OPEC member countries maximize the contribution that oil sales make to their government budgets by producing as much as possible. Consequently, given the dire financial straits facing many of these governments, it is unlikely any members of the cartel will agree to produce less oil unless it is in their unilateral interest.

Even if OPEC produces 700,000 fewer barrels per day, this is unlikely to move oil prices by a discernible amount, thanks to changes in the global oil market over the past six years. The shale oil boom has almost doubled U.S. oil production from slightly over 5 million barrels per day in 2010 to over 9.5 million barrels per day in 2016. Shale oil extraction technology requires frequent drilling and fracturing of the shale oil deposit to maintain oil production. While current oil prices have led to a significant decline in the amount of drilling activity in the U.S. over the past year, there are still many locations in the U.S.—North Dakota, Pennsylvania, and Texas, to name a few—with significant shale oil deposits, which makes it easy for North American producers to quickly ramp up their output in response to an oil price increase.

Outside of the U.S., China has one of the largest shale oil and gas reserves in the world, according to the U.S. Energy Information Administration. Currently, there is significant exploration and development activity there, and in other countries, such as Argentina, Mexico, and Australia.

All of these factors imply that an even-more significant reduction in OPEC’s output than the amount it proposed will not noticeably increase oil prices. In spite of this reality, a near-future reduction in output is still likely to be in the unilateral interest of the majority of OPEC’s member countries, as many of them are currently producing at record levels, even with OPEC oil inventories at record levels. Unless there are investments in new oil production capacity in these countries (which is unlikely at current prices), depletion of existing resources will cause output in these countries to fall over time.

Because an OPEC output reduction is likely to occur without any explicit coordination among member countries, there is little cost and some potential benefit to OPEC from acting as if it is the result of their coordinated actions. If OPEC’s output reduction happens to coincide with an oil price increase, then OPEC can claim credit and potentially gain political clout with oil-importing governments. If this sequence of events occurs without OPEC first announcing its intentions, then it has lost an opportunity to demonstrate its ability to raise prices.

Nevertheless, this is a set of circumstances under which OPEC’s output reduction could raise global oil prices. If a moratorium is placed on shale oil extraction in the U.S. and in other parts of the world, OPECs ability to control oil prices would once again emerge. Hence, the continued development and spread of shale oil extraction technology is the best defense against the emergence of OPEC’s market power.

Frank A. Wolak is the director of the Program on Energy and Sustainable Development and the Holbrook Working Professor of Commodity Price Studies in the Department of Economics at Stanford University.