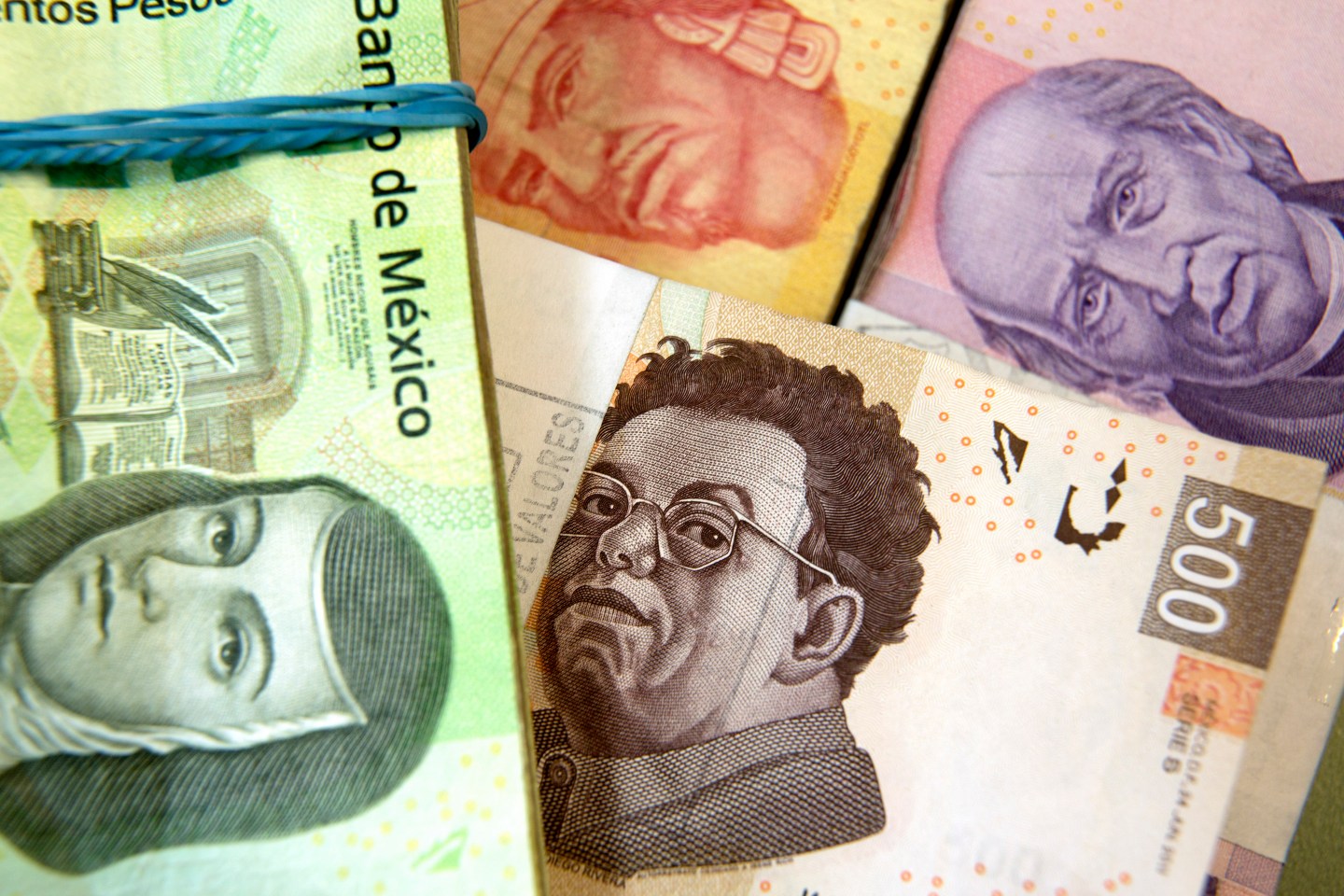 Various denominations of Mexican pesos are arranged for a photograph at a currency exchange in Mexico City, Mexico, on Friday, Oct. 10, 2014. Mexican bond returns have bolstered by the peso, whose 0.4 percent gain last week is the biggest since the period ended Sept. 19, data compiled by Bloomberg show. Photographer: Susana Gonzalez/Bloomberg via Getty Images
Susana Gonzalez/Bloomberg via Getty Images

The Mexican peso surged to a one-month high on Monday as Republican Donald Trump’s chances of clinching the U.S. presidency appeared to have ebbed further, while China‘s yuan briefly spooked markets by hitting a six-year low.

Trump’s prospects for winning the election took a hammering over the weekend following the release of a 2005 video in which he made sexually aggressive comments about women. His Sunday debate with Democratic candidate Hilary Clinton did not improve his position and Clinton is seen having an edge ahead of the Nov. 8 vote.

The peso surged as much as 2% at one point before giving up some gains. Seen as most vulnerable to a Trump win because of his threat to slap tariffs on Mexican imports and build a wall to keep out immigrants, the peso has fallen around 9% against the dollar this year.

But this month it has risen 2.4% as Trump’s chances have been seen declining.

“It’s obviously trading as the barometer for the presidential election,” said Dominic Bunning, an emerging markets FX strategist at HSBC. “The pressure has been on Trump in the past few days and that’s coincided with a move down in dollar/Mexico.”

Analysts warn, however, that the peso remains vulnerable to other factors such as domestic politics, oil prices and a current account deficit.

“The peso will continue to strengthen along with Clinton’s chances of becoming U.S. president, but the upside is more limited than many may expect,” SEB analysts told clients.

China‘s yuan touched a six-year low, before erasing some of its losses on the first day of trading after a week-long holiday.

The currency breached the key psychological threshold of 6.7 per dollar after the People’s Bank of China set its daily guidance rate at its weakest since September 2010.

But Bunning said the fix was relatively close to the week’s moves when the onshore market was closed. The U.S. dollar index rallied to a two-month high on Friday ahead of monthly U.S. payrolls data.

“We don’t think the move in the fix was notable when you look at it in context to the offshore market,” Bunning said. “It’s still around the 6.70 area; it hasn’t aggressively broken through.”

Chinese mainland stocks were up 1.4%, playing catch-up after the week-long closure, although gains were capped by selling in property shares as more cities imposed curbs on home purchases to cool the market.

Also in Asia, the Thai baht hit a three-month low, down 0.6% against the dollar, and stocks slipped 3% after a palace statement that the 88-year old king was in an unstable condition.

But Polish stocks bounced 0.7%, after German exports posted their biggest rise in more than six years. Central and Eastern European markets are closely tied to Germany for trade and investment.

The South African rand, a bellwether of risk appetite for emerging markets, also bounced 0.8% to the dollar.

But the Turkish lira slipped 0.3%, after data showing industrial output up just 2.2% year-on-year in August.

“The bigger picture is that growth weakened over the first two months of Q3 and September’s manufacturing PMI suggests that activity remained sluggish at the end of the quarter,” Liza Ermolenko, an economist at Capital Economics, said in a note.

“All told, it still looks like the Turkish economy slowed substantially following the attempted military coup.”