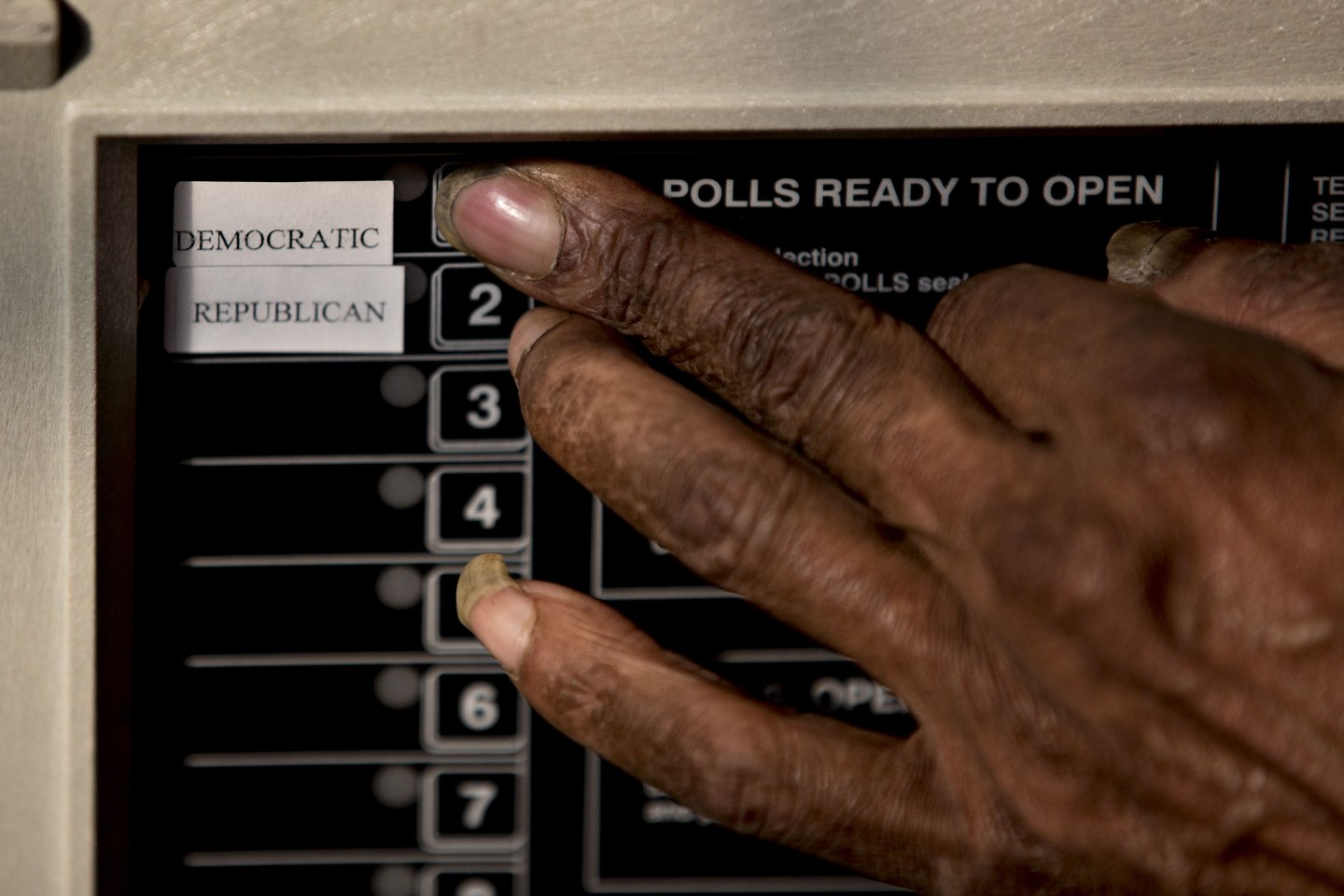 An election machine operator switches the party on an electronic voting machine at the Francis Myers Recreation Center polling location in Philadelphia, Pennsylvania, U.S., on Tuesday, April 26, 2016. Donald Trump is poised to sweep five Northeast primaries today and Democrats Hillary Clinton and Bernie Sanders will compete as well in the contests in Connecticut, Delaware, Maryland, Pennsylvania and Rhode Island in what's become known as the Acela primary because of the Amtrak route through the region. Photographer: Andrew Harrer/Bloomberg via Getty Images
Andrew Harrer — Bloomberg via Getty Images

The filing said undercover state troopers were given correct information this week and the Wisconsin Department of Transportation has updated training protocols as well as created specialists to help applicants.

A judge had ordered the state to report on how its voter ID law is being administered following the release of audio recordings that revealed DMV workers giving inaccurate information to people seeking voting credentials in lieu of photo identification. The filing figures to be a key piece of evidence as U.S. District Judge James Peterson holds a hearing Wednesday to consider a request to invalidate Wisconsin’s voter ID law completely because the Transportation Department has failed to administer it properly.

The Less Noticed Battles That May Decide The Presidential Election

In May, the Transportation Department adopted regulations allowing people who lack the supporting documents — such as birth certificates — needed to obtain an ID to get a receipt they can use for voting. The provisions were designed to blunt a pair of lawsuits alleging voters who lack supporting documents face hurdles in obtaining free IDs.

Peterson ruled in July that the process for obtaining the receipts was a “wretched failure” because it still left minority citizens unable to obtain IDs. He ordered the state to quickly issue receipts to anyone who applies for one.

The Nation published a story last week alleging DMV workers told a man named Zack Moore that he couldn’t obtain a receipt because he lacked a birth certificate and the way IDs were being handled was still up in the air. The magazine also reported that Molly McGrath, the national campaign coordinator with VoteRiders, visited 10 DMV stations where employees gave people varying answers about how long it would take to get a receipt.

Peterson ordered the state to investigate the allegations and turn in a report by Friday.

Since then, liberal group One Wisconsin Institute has asked Peterson to invalidate the entire voter ID law. The American Civil Liberties Union has filed a similar demand with a federal appellate court in a separate case challenging voter ID.

Gov. Scott Walker, who signed the voter ID requirement into law in 2011, told reporters Friday morning that the investigation had found problems with how the credential process was being administered but didn’t elaborate. Republicans such as Walker who support the law contend it will combat voter fraud, although nothing suggests widespread voter fraud exists in the state.

State attorneys argued in their court filing that Peterson can’t block the law because it’s been upheld by multiple courts.

The employees who dealt with Moore should have told him he could get a voting receipt within six days, the report said. However, they thought he was trying to obtain a permanent ID and could easily get his birth certificate. Media accounts of Moore’s interactions don’t mention that he never asked for an ID for voting and a receipt wasn’t mentioned until McGrath, who was accompanying Moore, interjected, according to the state’s filing.

As for allegations of inaccurate information at other DMV stations, the report said only two people were actually trying to obtain an ID and the other interactions involved a volunteer posing hypothetical questions about an absent relative. One of the real customers was issued a receipt after talking to a second worker; the other customer applied for a receipt and was told she would get one within a week, the report said.

The filing says the Transportation Department sent state troopers posing as customers to 31 DMV stations Tuesday and Wednesday. They were given receipt application forms and told they would have the credentials within a week.

The report said the DMV has implemented new protocols over the last week, including new training for field staff; creating a receipt specialist to help applicants at the 30 DMV stations open five days per week; instructing staff at part-time service centers to contact a hotline for help processing applicants; and setting up a hotline for questions.

One Wisconsin Institute Executive Director Scot Ross said in a statement Friday evening that the voter ID law is a failure and voters are being misinformed.