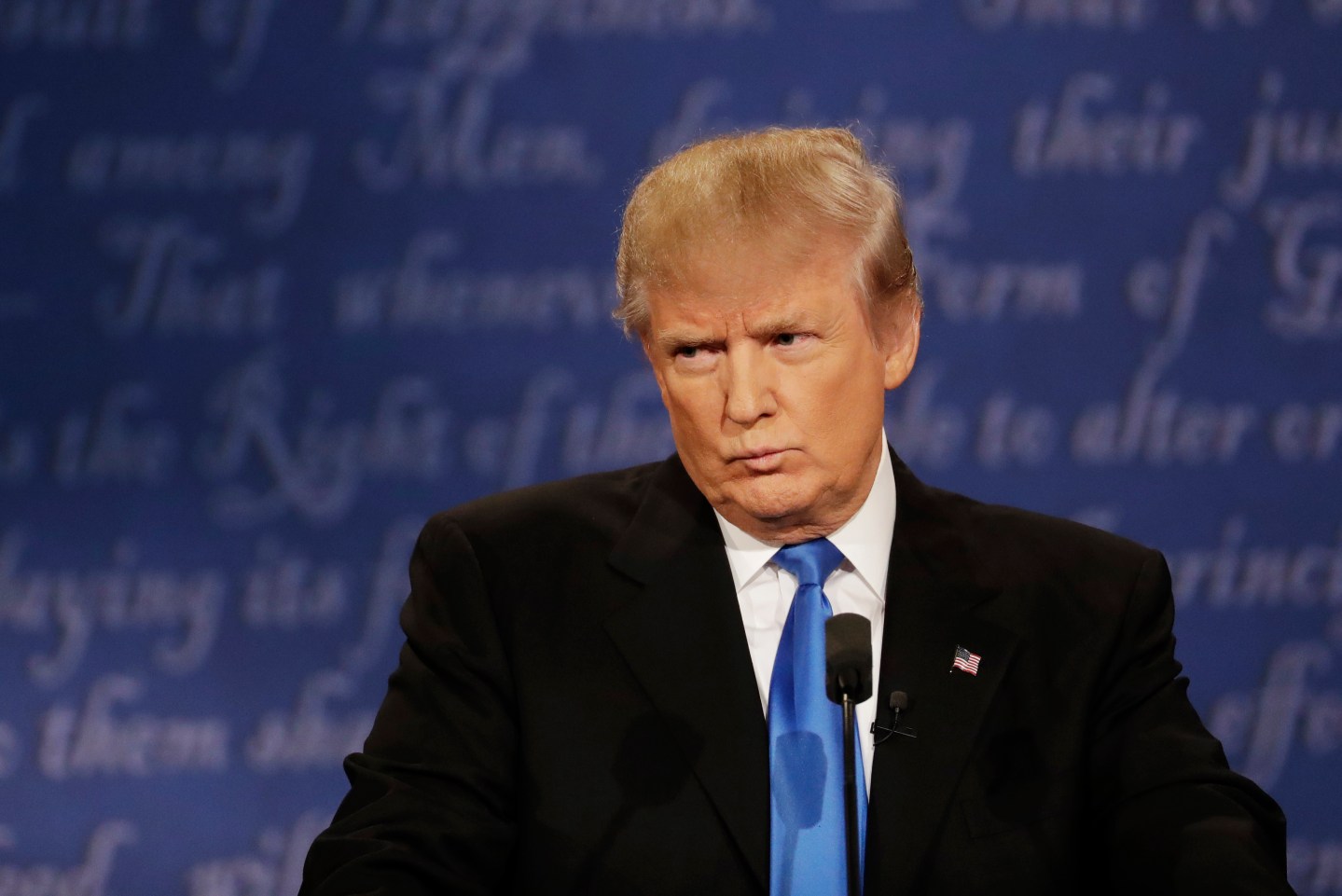 After what Donald Trump himself drily called “an interesting 24 hours,” high ranking members of the GOP and Republican elected officials are continuing to condemn Trump in droves.

In light of the newly published 2005 video, in which Trump makes vulgar comments about women and said he can “do anything” to them, even Trump’s own vice president expressed shock. “As a husband and a father, I was offended by the words and actions described by Donald Trump… I do not condone the remarks and cannot defend them,” Mike Pence said in a statement Saturday. But Pence stopped short of renouncing support or leaving the ticket: “I am grateful that he has expressed remorse and apologized to the American people. We pray for his family and look forward to the opportunity he has to show what is in his heart when he goes before the nation tomorrow night.”

Many other Republicans, however, said they don’t want to hear from Trump at the second debate, and said they think it’s time for him to drop out. Former Republican primary candidate Carly Fiorina said Trump should “step aside” as the GOP nominee. “Donald Trump does not represent me or my party,” she said in a Facebook post Saturday. (Fiorina experienced a sexist comment from Trump firsthand in the primary, when he suggested people wouldn’t vote for her because of her “face.”)

The History of Donald Trump’s Insults to Women

West Virginia Senator Shelley Moore Capito also suggested Saturday that Trump should no longer lead the ticket. “As a woman, a mother, and a grandmother to three young girls, I am deeply offended by Mr. Trump’s remarks, and there is no excuse for the disgusting and demeaning language,” she said in a statement. “Women have worked hard to gain the dignity and respect we deserve. The appropriate next step may be for him to reexamine his candidacy.” Alaska Sen. Lisa Murkowski said Trump has “forfeited the right” to the nomination, and Utah Rep. Mia Love said in a Facebook post that she would not vote for Clinton, but that she “cannot vote for him. For the good of the party, and the country, he should step aside.”

Other Republicans also expressed dismay at their choices for the general election, not calling on Trump to drop out but also saying they’re unable to cast a vote for him. Alexandra Smith, National Chairman of College Republicans, referenced Trump’s initial defense of his remarks and tweeted, “The Party of Lincoln is not a locker room, and there is no place for people who think it is. Definitely not with her, but not with him.”

The Party of Lincoln is not a locker room, and there is no place for people who think it is. Definitely not with her, but not with him.

Arnold Schwarzenegger, former Governor of California and Trump’s replacement host on The Apprentice, also said Trump had lost his vote. “For the first time since I became a citizen in 1983, I will not vote for the Republican candidate for president,” he said in a statement. “I want to take a moment today to remind my fellow Republicans that it is not only acceptable to choose your country over your party— it is your duty.”

And Ohio Gov. John Kasich, who never endorsed Trump, said he now knows he won’t be able even to support him privately at the ballot box. “Donald Trump is a man I cannot and should not support,” he said. “The actions of the last day are disgusting, but that’s not why I reached this decision, it has been an accumulation of his words and actions that many have been warning about. I will not vote for a nominee who has behaved in a manner that reflects so poorly on our country.”

The party’s backing away from its nominee began really more as a sprint away Friday night. Within hours of the leaked audio’s publication, GOP boss Reince Priebus, House Speaker Paul Ryan, 2008 nominee John McCain, 2012 nominee Mitt Romney and others had released statements denouncing Trump. The statements have ranged from condemnations of the language itself to full-blown renouncements of the candidate; Idaho Sen. Mike Crapo, Rep. Joe Heck, who is running for Senate in Nevada, and South Dakota Sen. John Thune, a member of Senate leadership, all revoked their support for Trump on Saturday and urged him to drop out. Alaska Sen. Dan Sullivan also revoked support, explicitly saying he doesn’t think Trump can “lead by example” on ending domestic violence and sexual assault.

Donald Trump Got a Tax Break For Stiffing Contractors

By midday Saturday, even Rep. Bradley Byrne, from a deep-red district in Alabama, was calling for the Republican nominee to step down. “Donald Trump’s comments regarding women were disgraceful and appalling.” he said. “There are absolutely no circumstances under which it would ever be appropriate to speak of women in such a way. It is now clear Donald Trump is not fit to be President of the United States and cannot defeat Hillary Clinton. I believe he should step aside and allow Governor Pence to lead the Republican ticket.”

And still, even if he were to step down, it’s too late to scrub his name from the ballots.