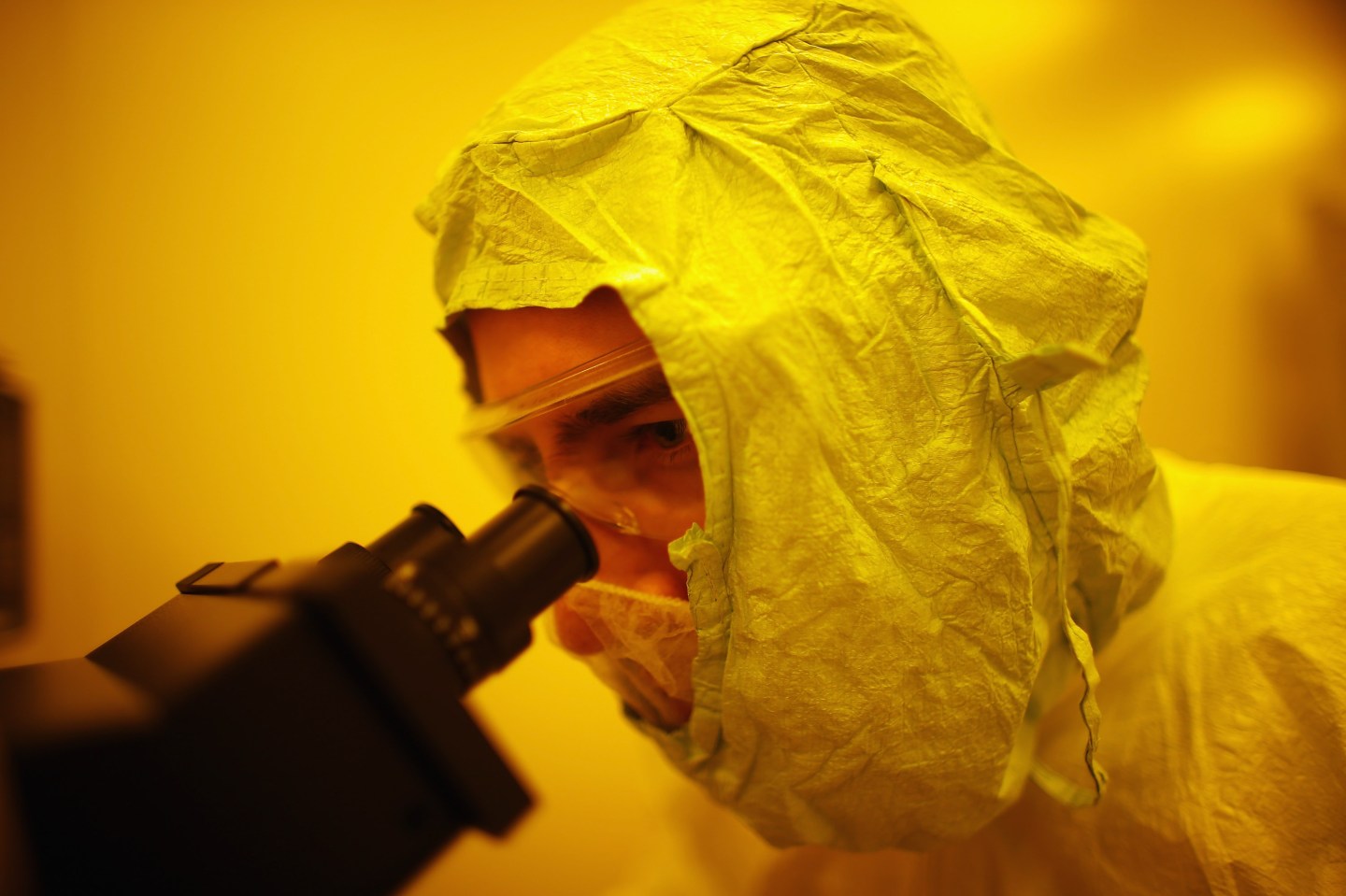 TAMPA, FL - JULY 13: John Winskas, a student in the nanotechnology research and education center at the University of South Florida, looks through a microscope on July 13, 2012 in Tampa, Florida. Tampa has opportunities for employers and employees in such high tech industry as agritechnology, aerospace, digital media, energy technologies, life sciences and medical technologies. The city will host the 2012 Republican National Convention at the Tampa Bay Times Forum August 27-30 where the party is expected to officially nominate former Massachusetts Gov. Mitt Romney as their nominee to face President Barack Obama in November in the general election. The convention will host 2,286 delegates and 2,125 alternate delegates from all 50 states, the District of Columbia and five territories as well as scores of journalists, guests and protesters. (Photo by Joe Raedle/Getty Images)
Photograph by Joe Raedle—via Getty Images

A trio of European scientists won the Nobel Prize in Chemistry on Wednesday for their critical roles in developing “molecular machine” technology which has the potential to revolutionize the way that computers work and even the way that humans take their medicine.

Jean-Pierre Sauvage, Sir J. Fraser Stoddart, and Bernard L. Feringa claimed the prestigious award, which will land them a nearly $1 million check to be split three ways. But the much bigger prize will likely stem from an influx of new research into the very field they helped develop—one that has already drawn intense interest from the biopharmaceutical and tech industries.

France’s Sauvage, the U.K.’s Stoddart, and the Netherlands’ Feringa each helped develop aspects of the “world’s smallest machines,” as Göran K. Hansson, secretary-general of the Royal Swedish Academy of Sciences, stated during the prize announcement. The researchers were able to find ways to manipulate molecules with the machinery. And that’s a huge deal for nanotechnology goals, such as better targeting cells that need to be destroyed or treated with certain drugs.

The scientists and prize committee said that these early methods of controlling and shifting molecular matter might be analogous to a nano-sized industrial revolution. For instance, Feringa’s experiments found that certain antibiotics could be manipulated by the presence of light.

There are many other potential uses, too. Other researchers can use these early-stage methods to shuttle drugs to an exact location where they might prove effective without causing collateral damage, for example.

One field where nanomachine tech could prove especially useful is cancer drug development. In fact, drug makers like Kite (KITE), Merck (MRK), and others have already been investing in personalized drug approaches to maximize efficacy and minimize side effects by pairing the right patients to the right treatments. Controllable molecular machines could take a lot of guesswork out of that process by giving scientists a truly customized biological tool down the road.