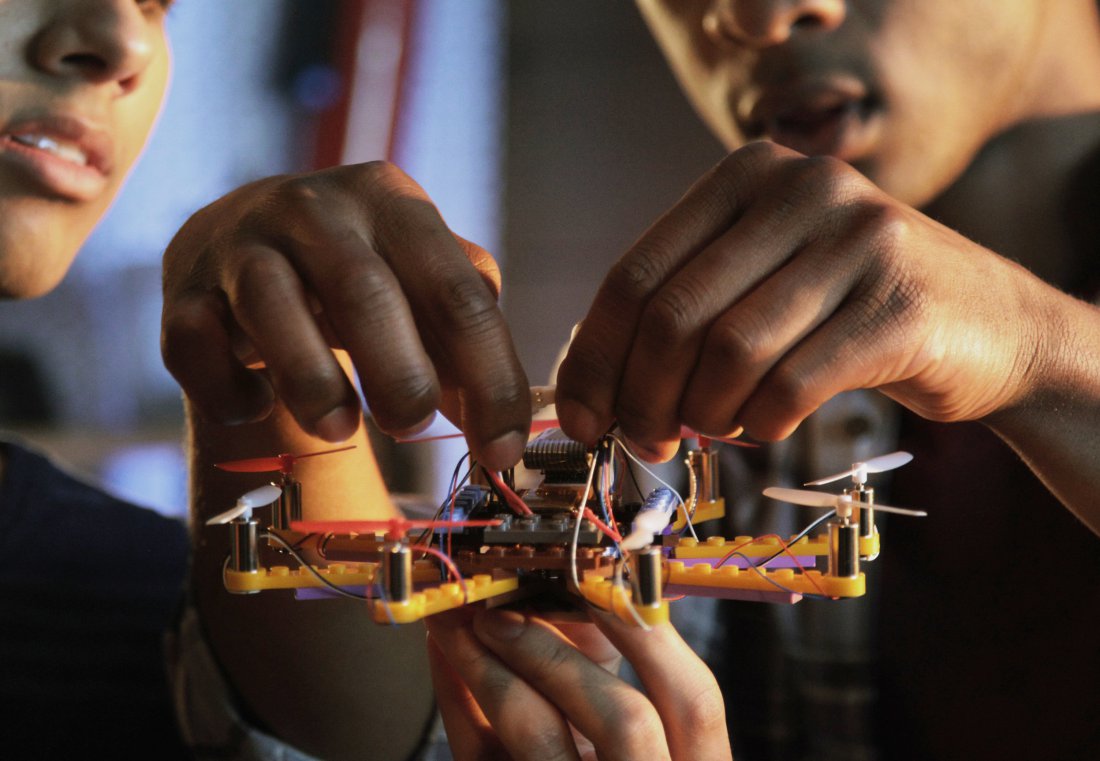 I had forgotten how much fun LEGOs can be. As I sat at my desk snapping together bricks, it was almost cathartic to follow the directions that came with this kit. I started with a pair of one-by-eights, attaching two pairs of boom arms. Next came the flight control computer board. No, that isn’t some new circuitry put out by the mad geniuses at LEGO. It’s an actual silicon chip used to control the propellers of a drone—and it’s the central piece of the Flybrix do-it-yourself LEGO drone kit.

Developed by a trio of partners out of MIT, CalTech, and UW Madison, Flybrix takes LEGOs to new, more fun, and very educational heights. Consisting of a bag of LEGO-brand bricks (and a minifig pilot, of course), a control board, propellers, motors, a battery, a charger and other hardware, the $149 kit (or $189 if you opt for a remote control, instead of piloting your aircraft with an accompanying smartphone app) provides hours of fun. Or minutes, if you’re as bad a drone pilot as I am.

Regardless of how you handle the joystick, Flybrix will help your understanding of drones, physics, and aerodynamics soar, making it a perfect project and plaything for curious kids.

Looking to take flight as soon as possible, I started by building a simple quadcopter, closely following the instructions to ensure I got everything right. I know LEGOs are fun for all ages, but I left them behind when I was 12. So while getting hands-on time with the plastic was a hoot, it was wiring the motors into the circuit board that really brought me back. My teenage years were spent tinkering with the circuit boards of upgradeable PCs, an era that seems like an eon from today’s world of manufacturer-serviceable smartphones and tablets. Attaching the Flybrix’s RC receiver onto its circuit board and wiring its motor connectors brought me back. It’s an an experience that today’s app-connected children would enjoy and learn from.

But the fun crashed like a ton of bricks when I finally finished building and set off to fly. After plugging in the battery, the circuit board’s lights flashed green, giving me the all clear to power this palm-sized drone up. Turning on the controller caused them to turn blue, telling me the drone was armed and ready for launch. And then I slowly eased the throttle stick up, but only the drone’s rear lifted off the ground. It seemed like there wasn’t enough power to help my minifig-manned creation catch air.

So I called off the launch and gave the battery a boost, topping it off with its included USB-connected power cable. After less than an hour, I was sure that the Flixbrix drone had all the juice necessary for liftoff. But again the drone remained anchored to the ground, scraping its hard plastic frame in circles on my front walk. My bird, it seemed, was wounded.

Frustrated, I figured that four motors must not have been enough to lift my awesome creation. Determined, I returned to the instruction manual and began turning my drone into an eight-rotored octo-pcopter instead, a design so complex that it flexed and bowed under the weight of gravity as I snapped it together.

Somewhere around step 13, I realized the problem with my initial design. As much attention as I gave to getting all the LEGOs right, I ignored the minor detail that the propellers couldn’t just be slapped onto the drone haphazardly. Neither my quadcopter’s battery nor its propellers were faulty at all. It was what they call in computer (and aviation) circles “an operator error.” I needed to pay closer attention to the wiring and rotor schematics in the instructions.

Finally, after double and triple-checking my octo-copter, I was finally ready to crank it up. I put it down on my front walk launch pad and jammed the controller’s flight stick up to the 12 o’clock position. The drone shot upward like a bottle rocket—and right into the tree branch that was directly overhead.

Chewing through the branch’s dried autumn leaves, the drone broke up in mid-air. As the propellers’ boom arms came off, the battery-fueled current caused the drone’s electromagnetic motors to collapse on each other violently, tearing the LEGO bricks apart.

The remains landed on my lawn with a thud, bits and pieces spinning out across my yard. If you thought stepping on LEGOs was a pain, try finding them under a blanket of fallen leaves. I seem to recall LEGOs being much more fun than this—but you may have better luck than I.