Airports Are Cutting Back on Free Wi-Fi 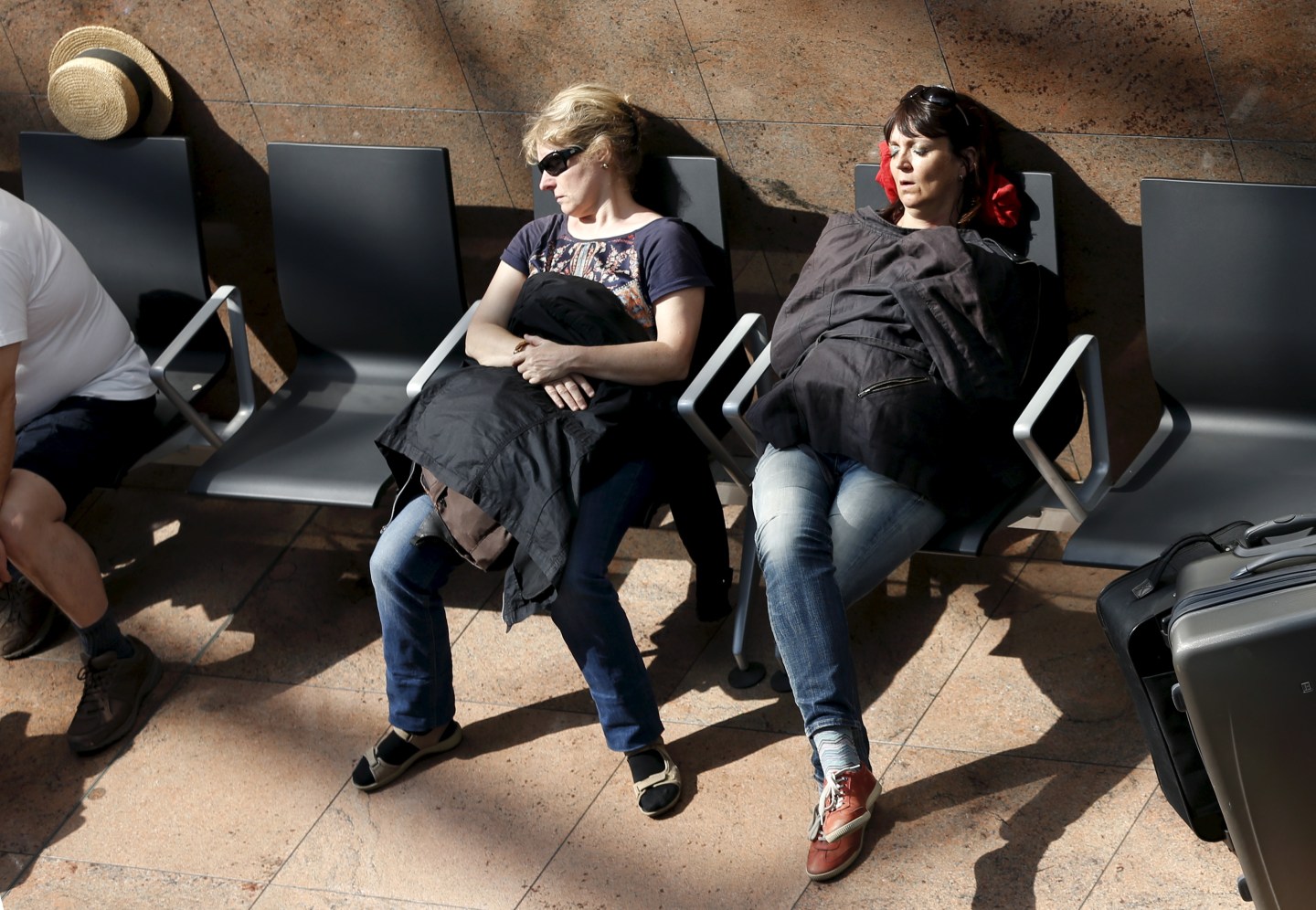 Stranded passengers sleep at Zaventem international airport near Brussels, Belgium, May 27, 2015. Flights in and out of Belgian airports were halted on Wednesday due to a technical problem at domestic air traffic controller Belgocontrol, although planes could still cross the country at higher altitudes. REUTERS/Francois Lenoir - RTX1EQDE
Photograph by Francois Lenoir — Reuters

Some airports are backing out of unlimited free airport Wi-Fi service, and our always-on smartphone habits and addiction to video could be partially to blame.

The news comes from a recent survey of global airport IT managers, conducted by aviation IT experts at SITA. The study found that while passengers can find unlimited free Wi-Fi at 74% of the world’s airports today, that will drop to only 54% of world airports by 2019.

“No airport is suggesting it will reduce availability of Wi-Fi, but more will introduce commercial models,” said Nigel Pickford, director of marketing operations and market insight at SITA.

Instead, 37% of airports will offer a “hybrid” Wi-Fi service model: Passengers would still have some free full-speed Wi-Fi for a limited time, but would pay for any Wi-Fi after that. Or, there would be free unlimited lower-bandwidth Wi-Fi with the option to pay for more speed. (Or some other combination which helps the airport pay the bills.)

Which specific airports are thinking of cutting back on unlimited free Wi-Fi is unpublished, but the trend towards a mixed-free/pay Wi-Fi service model is mainly driven by airports in North America and the Middle East, according to SITA.

But after years of promoting Wi-Fi as a passenger service, why the sudden change of heart?

Speaking as a passenger himself, Pickford suggested that one reason airports will charge for higher speed service is that we now travel with more powerful gadgets that also consume more data.

“We have better, faster phones, with more engagement and greater bandwidth demand,” Pickford said. We’re using our phones for much more than email, moving more to image-rich website browsing and video streaming.

Airports are also faced with 5% to 7% more passengers over the next few years, and that puts a strain on current Wi-Fi platforms.

Airlines might be contributing to the higher demand. Some offer downloadable entertainment for flights when there’s no in-flight entertainment equipment onboard. While these airlines recommend downloading content at home, some passengers may still leave it to the last minute.

Chris Nurko, Global Chairman of Futurebrand, believes our on-the-go work habits are driving demand, too. He says a fresh generation of entrepreneurs and freelancers needs to work wherever, whenever, even at the airport, and needs Wi-Fi to do that.

“The ability to be ‘connected’ and able to surf, download, play, is the most important feature once you have power—not losing signals and fast downloads,” he said.

But Nurko also believes there is an opportunity for companies to feed that need for speed. He suggests airports and hotels could use Wi-Fi as an incentive to get more data about passengers’ lifestyle and shopping habits, among other strategies.

Could This Less Wi-Fi Thing Spread?

Restrictions on free Wi-Fi are already spreading in other venues. The BBC recently reported that cafés are considering cutting back on the service because too many people are sitting for hours using Wi-Fi and only paying for a single cup of coffee.

Meanwhile, airlines are rushing to install antenna and working to find enough bandwidth to meet Wi-Fi demand in the air, and Wi-Fi in the skies is getting better.

“Based on published reports from companies like Juniper Research, smartphone usage on the ground already is a large consumer of bandwidth-heavy applications like video streaming, so this doesn’t change in the air,” said Don Buchman, vice president and general manager of ViaSat’s commercial mobility business. “It all comes down to does the network have enough capacity to enable the smartphone to connect to these bandwidth-intensive applications.”

ViaSat says its network can keep up with our demand today and tomorrow, with even enough capacity to stream movies or download large files.

To learn more about why your airport wait times might get shorter, watch:

Panasonic Avionics delivers high-speed Wi-Fi to a number of the world’s airlines, even over previously restricted Chinese airspace. They’re not too worried about our data-hungry habits either.

“Without a doubt, there has been a global adoption of smartphones. But that is only one piece of the puzzle,” Brian Bardwell, corporate communications manager at Panasonic Avionics Corporation said. “More and more passengers today are using any number of devices to connect to aircraft Wi-Fi, and they are using steadily increasing volumes of data per flight.”

Panasonic says plans based on demand at least five years out, and constantly enhances service performance to keep up, and it also has capacity for entertainment, including live-television.

“We are also looking at a wide range of technologies—from satellite designs, antenna innovations, wireless access points, and even new modems—to ensure a consistent experience for the lifetime of an aircraft,” Bardwell says.

Even if capacity keeps up, few airlines offer unlimited free service, but many are coming up with creative ways to pay for it.

Mobile phone companies are introducing faster data connections and free data roaming to certain destinations, so you might not need that free Wi-Fi at the airport. Your shiny new phone—or at least your shiny new phone plan—could be the solution for the restricted-airport-Wi-Fi dilemma.

We’re even using more mobile connections at home, according to the National Telecommunications & Information Administration Department. The percentage of households which now only use mobile internet doubled from 10% to 20% from 2013 to 2015.

However, the SITA study shows that 54% of the world’s airports will still offer free unlimited Wi-Fi by 2019, if you need it.