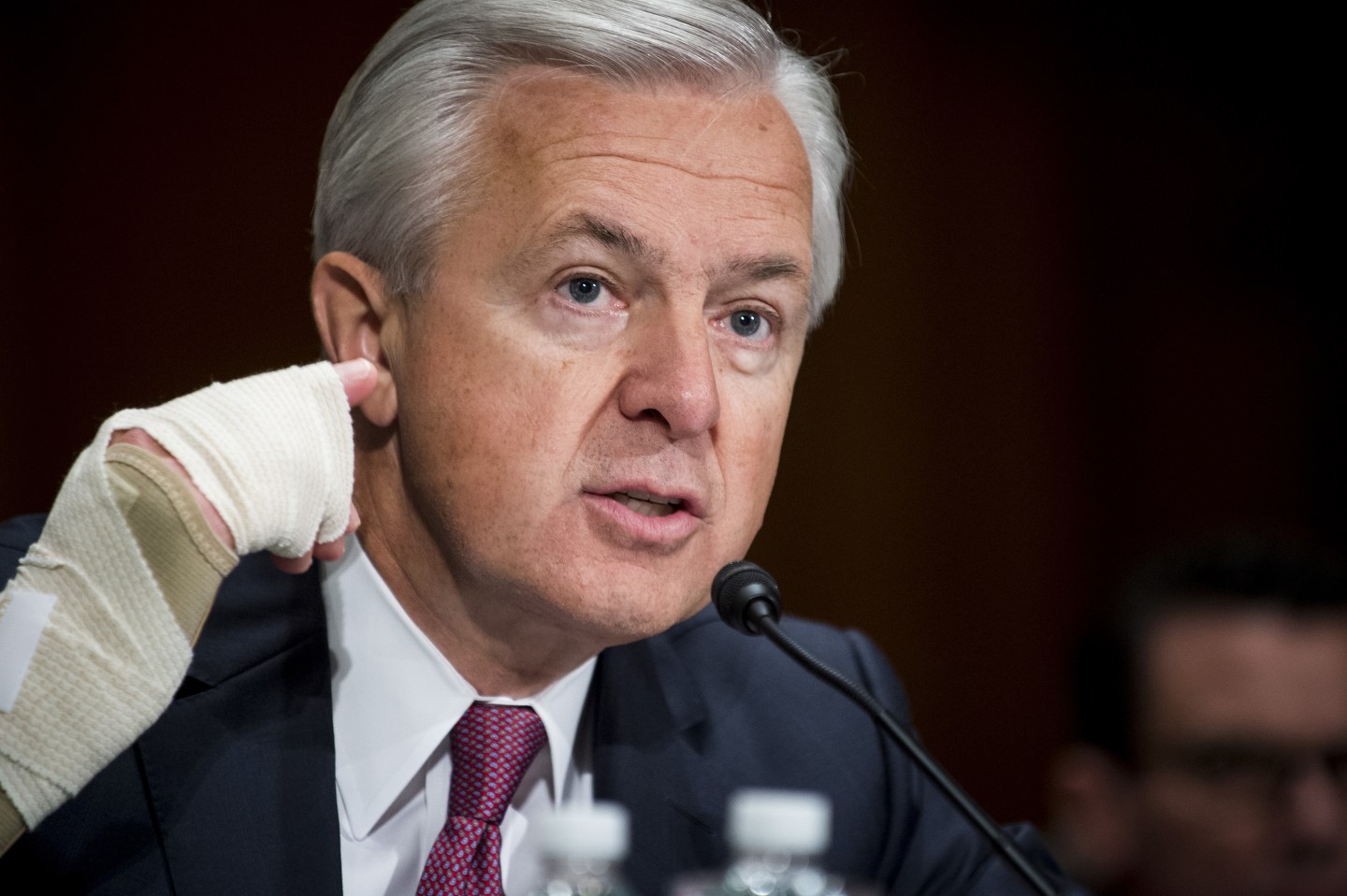 John Stumpf, chief executive officer of Wells Fargo & Co., testifies before the Senate Committee on Banking, Housing, and Urban Affairs in Washington, D.C., U.S., on Tuesday, Sept. 20, 2016. Stumpf, struggling to quell public rancor after the bank's employees opened unauthorized accounts for legions of customers, said the company has expanded its review of the matter to include 2009 and 2010.
Photograph by Pete Marovich—Bloomberg via Getty Images

Embattled Wells Fargo plans to eliminate sales goals for its retail banking business sooner than planned, according to prepared remarks its chief executive officer will deliver at a congressional hearing on Thursday.

Wells Fargo is under pressure to show it is holding top brass accountable after government investigators discovered that employees opened as many as 2 million accounts without customers’ knowledge in order to meet sales targets.

On Tuesday, Wells Fargo said CEO John Stumpf will forfeit unvested equity awards worth about $41 million and will not get a salary while the company’s board investigates the bank’s sales practices.

The third largest U.S. bank will eliminate the goals by Oct. 1, earlier than its previous target of Jan. 1, 2017, according to the remarks, which were obtained by Reuters. Stumpf will appear before the House Financial Services Committee on Thursday.

The San Francisco-based bank agreed to pay $190 million earlier this month to settle regulatory charges over the account scandal and has fired about 5,300 employees, most of them low-ranking staff, in connection with it.

Carrie Tolstedt, the former head of the retail division at the center of the burgeoning sales scandal, will get no severance and forfeited unvested equity awards worth about $19 million, the bank said. Tolstedt left the company before her planned Dec. 31 retirement date.

Stumpf and Tolstedt will also not receive bonuses for 2016.

The penalties represent one of the biggest financial sanctions ever levied against a major bank boss and mark a sharp change from a few years ago when no CEO had to give back a bonus despite scandals at large banks.

A special committee of the bank’s independent directors will lead an investigation into the retail bank’s sales practices, helped by the board’s human resources committee and law firm Shearman & Sterling LLP, according to the bank.

“We are deeply concerned by these matters, and we are committed to ensuring that all aspects of the company’s business are conducted with integrity, transparency, and oversight,” Stephen Sanger, the board’s lead independent director, said.

Stumpf, a member of the board, has recused himself from the investigation, the bank said.

Wells Fargo stock added 0.2% to $45.19. Up to Tuesday’s close, shares had fallen nearly 10 percent since Sept. 8, when it reached a settlement with regulators, wiping off about $24 billion of market capitalization.