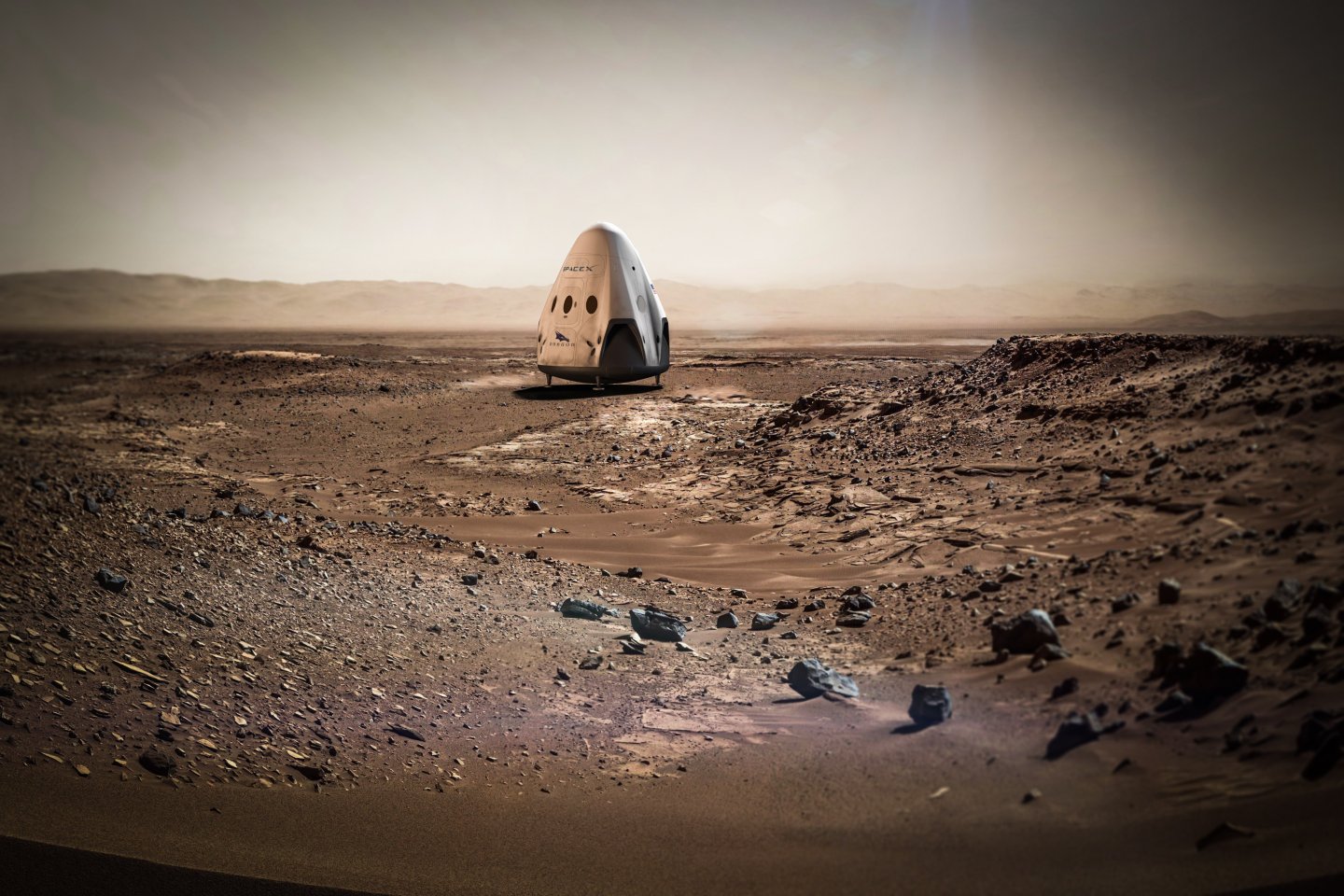 It’s extremely easy to get drunk on Mars. No, that doesn’t mean getting plastered on the actual planet. What it does mean is getting tipsy on the very topic of Mars, over the possibilities it offers us. By that non-literal measure, Elon Musk tied one on on Tuesday—and it was hard not to want to join him.

Musk, the CEO of SpaceX, got his Mars high while delivering a talk at the International Astronautical Congress in Guadalajara, Mexico. The topic was larger than just how human beings could get to Mars one day, but how we can colonize it, populate it, build a self-sustaining colony of up to one million people and do it within 40 to 100 years of the time the first load of settlers sets off.

Let’s stipulate first that Musk’s talk was what is known as a thought experiment, which is a semi-scientific way of saying that you get away with a lot of fudging over not-insignificant challenges like R&D and cost, and that you don’t have to answer questions like, “Do you really thing you’re going to launch hundreds or thousands of spacecraft carrying 100 people each and not have some incredibly bad things happen along the way?”

The upside of a thought experiment is that it lets you think big, and Musk did—beginning, like any businessman, with the matter of cost. Given current technology, he estimates it would cost $10 billion per seat to put people on Mars. His goal is to cut that to just $200,000. “If we could get the price of moving to Mars down to the equivalent of the median cost of a house in the United States, we could get enough people who wanted to go,” he says. “It would be the kind of thing you could save for and afford.”

For more, read: This Is Elon Musk’s Plan to Send Humans to Mars

So how do you achieve what he concedes is a five million-percent price cut? Start with rockets—really, really big rockets. The most expensive part of getting any spacecraft where it needs to go is lifting all of the hardware and other components off the ground and into a parking orbit around the Earth. The heaviest and thus most expensive component in terms of cost per pound of payload is the fuel you’d need for a Mars trip.

Musk proposes first using a massive new rocket to put the 100-person spacecraft into orbit and then using up to five more launches to carry up all of the fuel that it would need for the interplanetary trip.The size of the rocket he envisions is, well, let’s call it ambitious. The largest, most powerful booster ever built was the Saturn V moon rocket, which had a liftoff thrust of 7.5 million lbs (3.4 million kg). Musk would nearly quadruple that, to 26 million lbs. (11.8 million kg).

But never mind. Let’s assume this is possible and that the Mars liner with its 100 passengers relights its engines and peels off for the Red Planet. Nice work so far, but it’s going to be a while before those settlers have much company. Mars and Earth move into favorable conjunction for a launch only once every two years, which means that in order to get your one million people on Mars (putting aside for a moment the babies who will presumably be born there), you need 10,000 launches, over the course of 20,000 years.

Musk has an answer for this too, however, which is to build 1,000 spacecraft, put them all into Earth’s orbit at once, and send them off to Mars together carrying a 100,000 people at a time. “The Mars colonial fleet would launch en masse,” he says, “like Battlestar Galactica.”

It could have escaped the notice of nobody listening to Musk’s presentation that Battlestar Galactica was, you know, science fiction. But again, the delightful thing about a thought experiment is that, provided you deal with known technology and don’t just throw in hocus pocus like warp drive, a form of sci-fi is actually OK. Within those generous rules, Musk’s scenario holds up so far.

The same is true of his plan for manufacturing rocket fuel on Mars so that the ships that deposit the settlers there can fuel back up, come home and pick up the next 100,000 soon-to-be-Martians. That fuel would be methane—chemically CH4—which is easy enough to manufacture from the carbon dioxide (CO2) in the atmosphere of Mars and the water (H20) frozen in the soil.

Of course, you’d also need habitats and solar panels and surface rovers and millions of tons of other infrastructure to sustain a Mars colony. But even NASA, which is doing a lot of hard-headed planning just to get a crew of four astronauts on the surface of the planet by 2030, is allowing itself a certain amount handwaving at this point about shipping those essentials on ahead aboard uncrewed rockets.

Musk’s Guadalajara audience reacted the way most of Musk’s audiences do when he talks this way, which is to say enthusiastically. And why not? If you were an investor and he was selling you all of these fever-dreams and vaporware, that would be a problem. And he can’t get away with anywhere near as much over-promising as he readies his Falcon 9 rocket, which has already carried cargo to the International Space Station, to carry astronauts too. That’s especially so in the wake of a Falcon 9 explosion on the launch pad on Sept. 1, which followed another explosion during liftoff in June 2015.

Still, big, crazy ideas have a way of becoming big, crazy, realized ideas—a canal cut though Panama; a 70-story dam in Colorado; or for that matter, a promise to put Americans on the moon before 1970 when it’s already 1961 and the country has a total of 17 minutes of space flight experience. Musk may be way, way ahead of himself. But setting the goal is the first step to catching up.