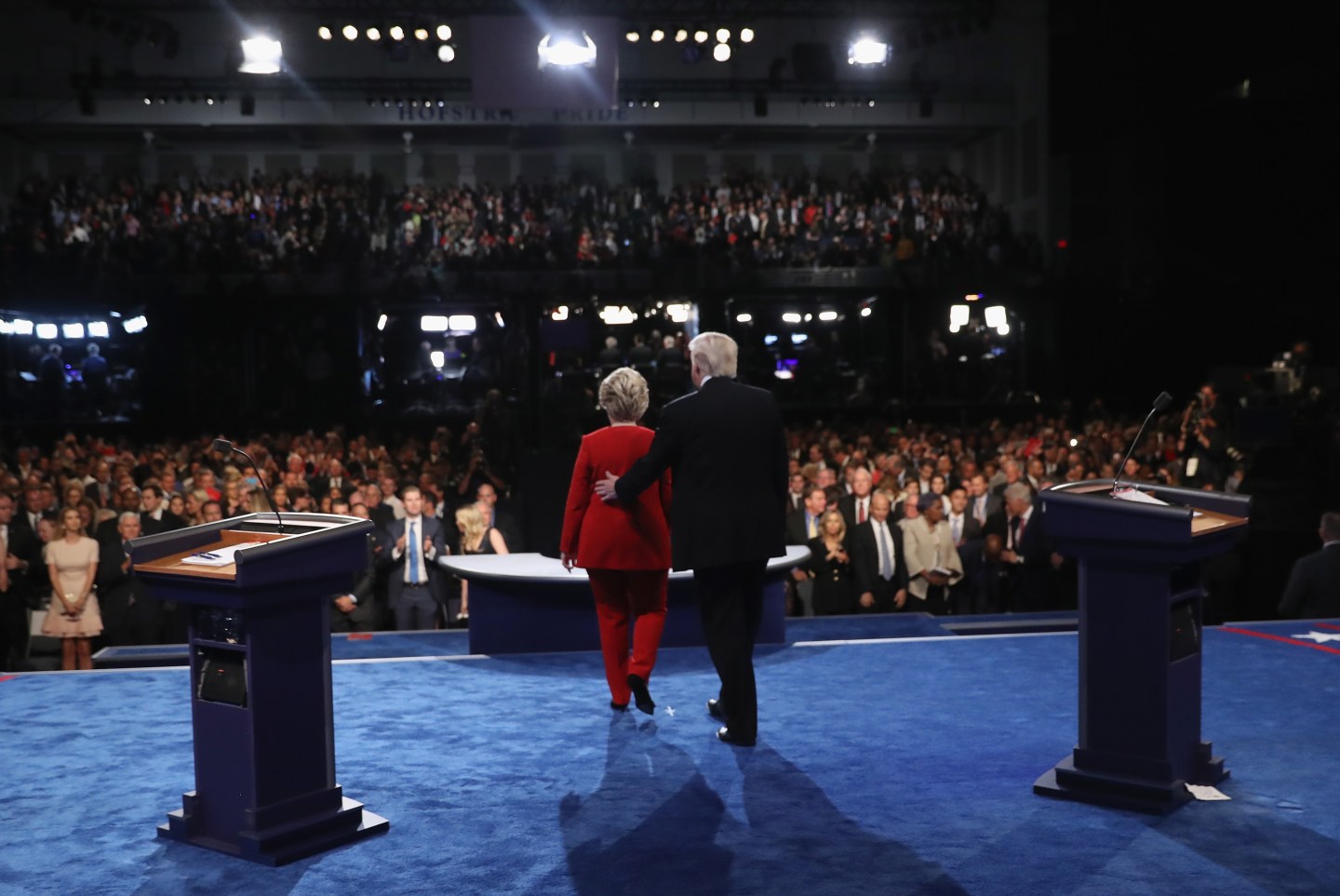 For business owner Jason Feinberg, the first presidential debate made something crystal clear: as an ardent Bernie Sanders supporter he’s not excited about Hillary Clinton, but he plans to vote for her in November nonetheless. Because the alternative—Donald Trump—would be unthinkably bad for businesses like his, not to mention the country.

Both candidates tried to woo small businesses during last night’s presidential debate, a 90-minute spectacle that attracted an estimated 100 million viewers. Early on, Clinton introduced herself as the daughter of a small businessman who supported the family by printing drapery fabrics. And she hammered Trump on his poor record with the contractors he has used to build his empire.

“I have met a lot of the people who were stiffed by you and your businesses, Donald,” Clinton said. “I’ve met dishwashers, painters, architects, glass installers, marble installers, drapery installers, like my dad was, who you refused to pay when they finished the work that you asked them to do.”

In response, Trump said simply he didn’t pay because he was perhaps unhappy with the work.

“I wonder how anyone watching the debate could watch this and not feel repulsed by this self-advertised billionaire owning up to stiffing small businesses, using the loopholes available to him,” Feinberg says. “I run a business and I don’t stiff anyone, and it clearly sounds like Donald Trump is willing to abuse his position of power.” Feinberg is the founder of Fctry, a Brooklyn-based manufacturer of political action figures and other novelty toys.

Related: This Donald Trump Action Figure Is Being Made for a Very Un-Trump Reason

It’s not only Democrats who thought that Trump lost to Clinton in their first official match-up.

Jarrod Musick, president of Denver-based investment firm Destiny Capital, is a registered Republican who’s disappointed with his party’s presidential choice and plans to vote for Libertarian Gary Johnson. He was listening to the debate for clarity on the economy and taxes, which affect the individuals and businesses his company serves, and says Trump failed to deliver.

“Hillary Clinton won last night,” he says. “On a policy level, she sounded like she had it more thought out, and she talked about balancing the budget, and said three or four times that Trump’s policies would expand the national deficit and individual debt. For business owners with significant business assets, stability is something to be desired.”

A number of polls of small business owners show Trump in the lead. An August survey by small business network Manta shows Trump with 39% of the vote compared to Clinton’s 27%. Yet, experts say, the debate provided an opening for Clinton to persuade undecided voters. And faced with two candidates who are unpopular, business owners may see the wisdom in voting for the candidate who will best stay the course.

“It was really a slaughter and Clinton dominated her opponent for substance, and she looked and sounded presidential,” says John Hudak, a senior fellow in governance studies at Brookings Institution. “In a race focused so much on temperament, you saw one candidate who was cool and calm and collected, and one who was very much unhinged and unable to deal with criticism.”

Trump tried to sell his credo that as a successful businessman who has, by his own estimation, built a multibillion-dollar empire, he is best suited to lead the country into a new era of prosperity. In so doing, he has aligned himself with traditional Republican themes of trickle down economics—that the wealthy will fire up the economy if they get substantial tax cuts.

“Under my plan, I’ll be reducing taxes tremendously, from 35 percent to 15 percent for companies, small and big businesses,” Trump said. “That’s going to be a job creator like we haven’t seen since Ronald Reagan. It’s going to be a beautiful thing to watch.”

“The idea that cutting taxes will lead to a surge in business investment should not be taken seriously at this point,” Dean Baker, co-director of the Center for Economic and Policy Research, in Washington, D.C., said in an email. “We have a large body of academic research showing investment is relatively unresponsive to tax rates, but more importantly we have actually tried this twice—(with) Reagan and Bush–and neither time was there a noticeable uptick in investment.”

Similarly, Jim Kessler, vice president of policy for centrist think tank Third Way, said Trump’s economic isolationism, highlighted a number of times as he talked about undoing trade agreements like NAFTA, or engaging in a tariff war with China, would do serious damage to the economy, and the standing of the U.S. in the world.

“This is new for the Republican party, to tear up trade deals and pull out of the World Trade Organization, and NATO,” Kessler says.

Even ardently Republican business owners, such as Ryan Cassin, chief executive and founder of the Republican political consultancy Beast Digital, in Dallas, Texas were somewhat disappointed with Trump.

“I was looking for a sensible approach to reforming Obamacare, which is one thing that is not serving our employees well,” Cassin says, adding he also wanted to hear Trump talk about reform of new overtime regulations, enacted by the Obama administration, and comprehensive tax reform.

“There was so little time and attention paid to substantive matters like jobs and economic growth,” Cassin says.

Editor’s Note: A previous version of this story incorrectly stated Dean Baker’s title. He is co-director of the Center for Economic and Policy Research.